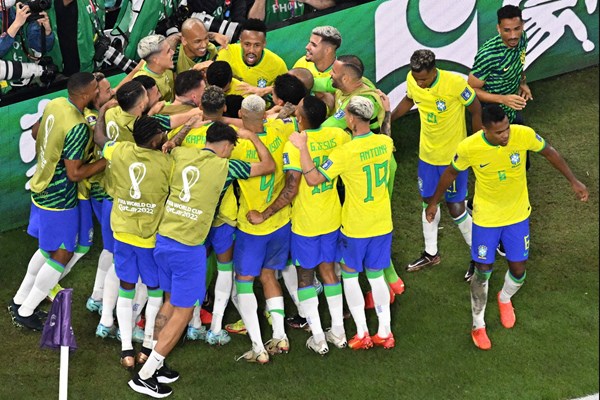 Murad Al-Masry (Dubai)
10 phenomena topped the scene in the second round of the group stage of the 2022 World Cup, between being the talk of the masses and societies, carefully following all the details of the event and transmitting them through social media, or technical aspects that caught the attention of football specialists.
The beginning was with three teams deciding the ticket to advance to the second round, namely: France, the defending champion, Brazil, one of the candidates to compete for the title and the most crowned on five previous occasions, and Portugal, led by Cristiano Ronaldo, after these were the only teams that achieved victory in the first two rounds in a row.
It was remarkable in the second round of fluctuations in terms of the ability of 6 teams that suffered a loss in the first round to achieve victory in the second round, which are Senegal, Iran, Argentina, Australia, Costa Rica and Ghana.
In the second round, the phenomenon of the first half ending in a large number of matches continued with a goalless draw, as the number of matches that ended without goals in the first half reached 17 matches so far out of the 32 matches held in the first two rounds.
Qatar entered history by being the first host country in the history of the World Cup to bid farewell to the competitions after only two rounds, after suffering two losses in a row. Which suffered a second loss in a row.
While Morocco recorded a prominent presence and Arab joy from the ocean to the Gulf after it achieved a victory over Belgium with a clean double, to be its first victory since the 1998 edition, which makes it and Saudi Arabia enter the list of chances to qualify for the second round in the third round, and to a lesser extent Tunisia, which suffered a loss and will have to It has to beat France, the defending champions, in the last round.
Players emerged with their ability to visit the net for the second round in a row, and they are: Frenchman Kylian Mbappe and Ecuadorian Ener Valencia, who top the list with 3 goals each, while he scored again to score two goals from Argentine Lionel Messi and Spaniard Alvaro Morata.
It was remarkable that three teams had so far been unable to score, namely: Uruguay, Tunisia and Mexico, and it is remarkable that they all have one point from a tie in the first round, but while continuing their fast from scoring, they suffered a loss in the second round, and the strange thing is Uruguay in particular, which has offensive names. Prominent led by the trio of Luis Suarez, Darwin Nunez and Cavani.
The second round witnessed the first case of dismissal in the tournament, and it was the share of Welsh goalkeeper Wayne Hennessy against Iran, while Portuguese Paulo Bento became the first coach to receive a red card after he objected to the referee for the South Korean national team’s match against Ghana.
Cameroonian Vincent Abu Bakr topped the scene, after he became the first African player to score and make a goal after his participation as a substitute, to lead his country to an exciting 3-3 draw with Serbia, and to avoid the “lions” defeat in a World Cup match for the first time since 2002, as he ended a series of defeats. It continued for 8 consecutive matches in the tournament.
Ghanaian Mohamed Qudous became the second youngest African player to score two goals in a World Cup match at the age of 22 years and 118 days, after Nigerian Ahmed Musa, who scored a brace against Argentina in the 2014 edition at the age of 21 years and 254 days.

See also  Thank you Union and Bruges: Belgian clubs in the top 5 of the best European leagues by UEFA coefficient