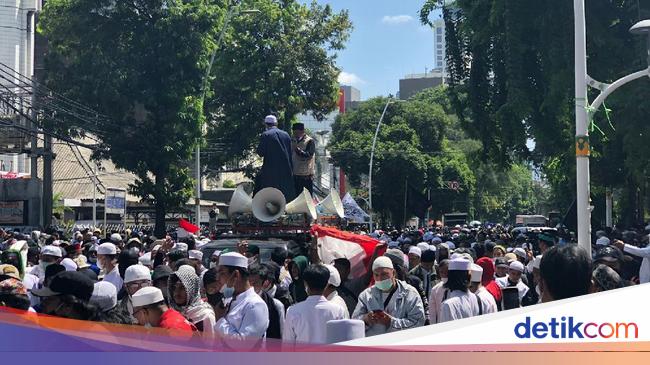 212 reunion still held in the Horse Statue area even though there was no police permit. As a result, Reunion 212 moved here and there.

On November 11, 2021, the Alumni Brotherhood (PA) 212 plans to hold the event at Monas. However, the refusal came after a lot of criticism because the event was held when the situation in Indonesia was still hit by the COVID-19 pandemic.

The 212 reunion was held in two forms, namely the action entitled ‘Superpeace Action’ which was held in the morning at the Horse Statue, Central Jakarta, as well as gathering and dialogue with 100 figures. This event will be held at the Az Zikra Mosque.

However, it turns out that recently the Polda Metro Jaya and the Az Zikra Foundation rejected PA 212’s proposal. Here are the facts.

No Permit on Horse Statue

“Polda Metro is firmly not going to give permission for this activity. We have said that it will not give permission,” said Head of Public Relations of Polda Metro Jaya Kombes E Zulpan when contacted by detikcom, Tuesday (30/11).

Zulpan said the crowd permit was issued by the police. However, in this publication, the event committee must complete the administrative requirements that have been determined.

“Therefore, based on the recommendation of the COVID-19 Task Force which did not provide a recommendation for this activity, the Polda Metro Jaya would not issue a permit,” Zulpan explained.

The Az-Zikra Foundation also opened its voice regarding the Az-Zikra Mosque which will be used as the location for PA 212 to hold a reunion event. They confirmed that they refused because Az Zikra was in a state of grief over the death of Muhammad Ameer Adz Zikro.

“In connection with the atmosphere of mourning over the death of Ustadz Muhammad Ameer Adz Zikro’s son, the second son of the late KH Muhammad Arifin Ilham, at the request of the family (Ummi Yuni Al Waly) – the mother of Ustadz Muhammad Ameer Adz Dzikro, as well as the results of joint deliberation between the Sharia Council , the Board of Trustees and the Supervisory Board of the Az Zikra Foundation, it was decided for the time being the Az Zikra Assembly did not accept any activities held by external parties,” the letter read as seen by detik.com, Wednesday (1/12/2021).