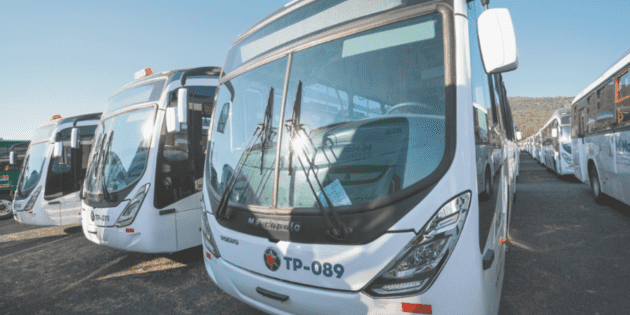 Of the 639 units of public transport that the Government of Jalisco received yesterday, 368 will be for trunks, complementary routes and feeders of the Peribus.

During the presentation at the Akron Stadium, the Secretary of Transportation, Diego Monraz, said that with this delivery there will be 975 new trucks for the Guadalajara Metropolitan Area (ZMG) this year.

The official explained that among the vehicles there are some that have a low floor and ramps and others that run on natural gas or with Euro 4 and 5 systems.

“With this Jalisco becomes the number one State in fleet renewal in the country”, Assured Monraz.

On the other hand, the head of the Metropolitan Institute of Planning (Imeplan), Mario Silva, stressed that with this the ZMG will lower emissions of pollutants into the atmosphere.

“One of the goals is that by the year 2030 100% of the public transport units in the metropolis have to be renovated with electromobility, with Euro 4 and 5 systems or with natural gas. If we continue with the trend that has been taking place in Jalisco since 2020 with the renewal of units, we will have less than 230 thousand tons per year of these gases that warm the planet. It is a very important action because by 2030 we will have reached 2.3 million tons less, “he explained.

On November 21, This media published that among the challenges of the race to achieve the fulfillment of objectives contained in the Metropolitan Climate Action Plan (PACMetro), which was recognized by the United Nations Conference on Climate Change, is that in 2050 the metropolis will be a city with zero net greenhouse gas emissions from the energy, transport and waste sectors.

The PACMetro seeks to increase the users of the Urban Electric Train System (Siteur) by 20% and foresees that in seven years 10.9% of the private vehicle fleet will be made up of electric units.

To reach the goal, the trend of growth of cars in circulation will have to be broken. Last year they exceeded four million units.