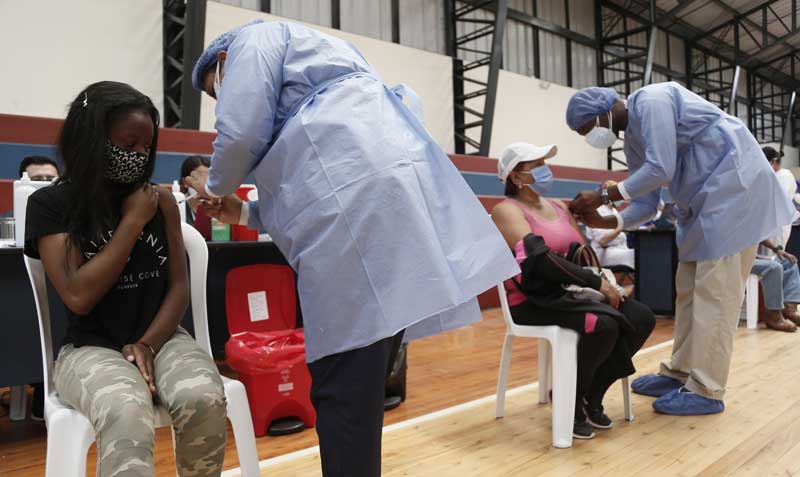 In your update report pandemic in the country, the Minister of Health, Ximena Garzón, announced this Thursday, January 13, 2022 that the 80% of the population is already vaccinated with two doses of the vaccine.

“This is good news,” said the official, adding that 86.35% of people have a dose and in addition 1 640 440 have been placed booster dose, which are applied from five months after the second to people over 50 years of age, health and front-line personnel.

On the other hand, the cases of illness are followed increased exponentially. In the first week of January, Garzón said, 15,065 were counted and so far this week (until January 12) 14,445 were identified.

“There is a significant increase in cases that have even clearly exceeded those of week 25 of 2021,” said the official.

By the end of this week (January 16) the authorities estimate that the Ecuador exceeds the 20 00 cases from covid-19However, it is expected that from the following week there will be a downward trend in infections.

Despite the high rise in infections, according to Garzón, the mortality has not increased noticeably. The data of the Ministry of Public Health (MSP) indicate that in the first week of January 2022, 28 deaths were registered, between confirmed and suspected, and so far in epidemiological week 2, there are eight confirmed and one suspected by covid-19.

Garzón compared these mortality figures with those of epidemiological week 15 of 2021, where 536 confirmed deaths from coronavirus and 82 probable deaths were recorded. “If we compare, it is really less than a tenth and that is because of the vaccine,” he assured.

Refering to viral positivity, pointed out that Ecuador maintains the global trend that is increasing. So, the positivity in antigen testing is 62% and in PCR it is 47%, that is, of every 100 people who have the swab done, 47 are positive.

The hospital occupation It was also addressed in the session held on January 13 by the National COE. There it is indicated that of 1,474 beds assigned for hospitalization of covid-19 patients nationwide, 774 are employed, while in intermediate care there are 97 and 48 are occupied.

In the Intensive Care Units (ICU) 489 are assigned and 340 remain full.

At the National COE meeting, the Minister of education, María Brown, also confirmed this Thursday, January 13, 2022 that public educational institutions that have approved their Educational Continuity Plan (PICE) and that they suspended classes for a week for the vaccination against the covid-19 They will return from Monday, January 17 to face-to-face.

Brown reiterated that if a teacher The student suspects or has covid should not go to the campus in person and should keep isolation for 10 days in case there are symptoms. If the patient is asymptomatic, the isolation will be seven days from the diagnosis with the PCR test.