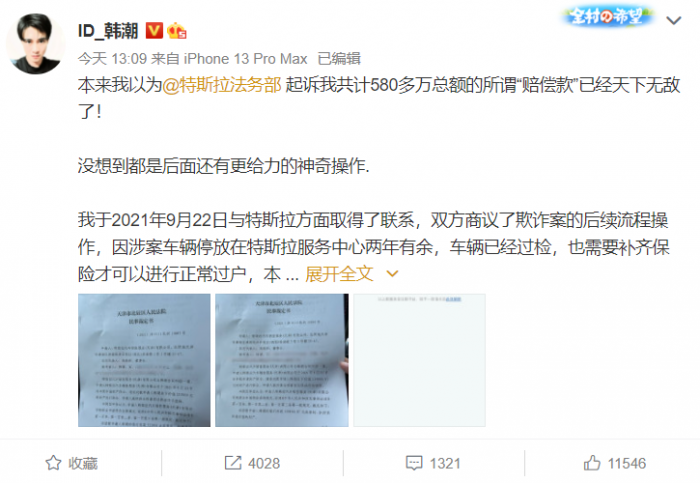 Without warning, Tesla was listed on the hot search today. The reason was the “competence” with the rights defending car owners. Moreover, Tesla’s approach has once again refreshed the recognition of many domestic netizens. According to rights defender Han Chao,He was sued by Tesla in court, accused of infringing on Tesla’s right of reputation, and was indemnified for 5.05 million yuan (5.05 million yuan). This one-handed operation of Tesla directly “showed” a crowd of netizens.

In addition, regarding Tesla’s “rights fighters”, there is also a domestic “woman car owner defending rights on the roof of the Shanghai Auto Show”, Ms. Zhang. One of Ms. Zhang’s appeals has always been to expect Tesla to provide vehicles at the time of the accident. Background data,But up to now, under the coordination and processing of multiple domestic departments, Ms. Zhang still has not obtained the complete background data provided by Tesla.

and,Ms. Zhang was not as lucky as Mr. Han Chao. She received Tesla’s million yuan compensation, but she was also indiscriminately claimed by Tesla for 5 million yuan.

Today, Ms. Advocate, a female car defending rights on the top of the car, spoke on a personal network platform. She said that there are currently two disputes between her and Tesla that are currently being handled.

On July 26, 2021, the Beiguan District Court of Anyang City rejected the objection to Tesla’s jurisdiction, and the jurisdiction ruling became effective 10 days later.

Due to Tesla’s jurisdictional objection, other infringement cases that I sued Tesla could not be filed temporarily.

On September 19, I received a notice from the People’s Court of Beiguan District, Anyang City: A pre-trial meeting will be held on September 28.

During this period, Tesla refused to fulfill the order of the Zhengdong New District Market Supervision and Administration Bureau of Zhengzhou City on April 22 that Tesla unconditionally provide complete data directly. To this day, I still haven’t got the complete background driving data of my vehicle at the time of the incident!

Case 2: On August 14, I received a request for pre-litigation mediation opinions sent by the People’s Court of Qingpu District, Shanghai. Tesla asked me to apologize and compensate 5 million for loss of reputation.

It is reported that many other Tesla owners have also been sued by Tesla for infringement of reputation and demanding high compensation. I will actively prepare for this case and protect my legitimate rights and interests in accordance with the law.

Next, I will follow up all judicial procedures in accordance with the law and share with you when appropriate.

Believe in the law, believe in justice, and believe that the legitimate rights and interests of consumers can be protected. Justice may be late but it will never be absent.

It can be seen from the cases of Ms. Zhang and Han Chao that Tesla is using legal weapons to launch “magic attacks” on those “black powder” car owners.And for an individual, the reputation loss fee of 5 million yuan sounds like a fantasy.

It is difficult to say that after buying a Tesla vehicle, he said that Tesla was not good, and he had to sell the house to compensate Tesla for his reputation.

Regarding Tesla’s operation, as a consumer and netizen, I can only sigh: “I don’t understand, but I was shocked.”