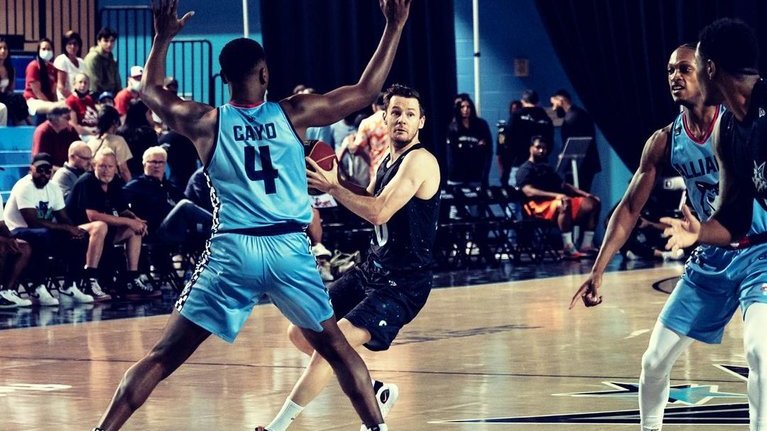 Looking at the Lithuanian basketball players who are not in the national team, Sarūnas Vasiliauskas the season lasted perhaps the longest.

He became the runner-up in Romania on June 2nd and 5 days later he was on the court in the Canadian League, where he wore the Scarborough Shooting Stars jersey.

The Lithuanian himself did not plan that he would have to run so quickly from one court to another, but he could not forget his promise to his friend.

In the middle of the season, former teammate Brady Heslip called him and invited him to visit. True, a more interesting offer followed – to play in his team. Š.Vasiliauskas had not yet had such an adventure, so he could not refuse.

The Lithuanian’s statistics in the Canadian League reached 6.4 points, 1.7 rebounds and 3.5 assists in 23 minutes.

Although the “Shooting Stars” season still continues in the final four, Š. Vasiliauskas left a little earlier, because he had urgent business in Lithuania. His vacation will last only a couple of weeks – already on Sunday he will go back to the Voluntari team, with which he extended his contract for another year.

“I had a little rest, but this is a one-time experience, I think it will never happen again in my life. Having never made such decisions during my career, I thought I should try. I really liked it. I don’t regret going to Canada at all.

I still had to be there until now and then go straight to Romania, but I had to take medicine, fix my teeth or change bank cards – the simplest things. That’s why I left earlier. Now I was offered to separate at least to watch the finals, I would really like to, but I will have to be in Romania, preparing for the season,” he said.

– How did it happen that you decided to extend the season and do it in a rather unusual country – Canada?

– In Trabzon, I played with Brady Heslip, who is the general manager of the Shooting Stars team. He suggested that I come with my family to visit him and play together. He says: I will practice, you will see the next basketball game. This was back in February and I agreed. I thought that with the Volunteer team, we would go hard to the finals, finish the season at the end of May and I will be in Canada in the middle of June. But the season continued to the end and I immediately went to Toronto. I calculated, I was too pessimistic (Laughs).

I almost got off the plane to go to the match, I hadn’t recovered from the finals, I had to play a lot. I loaded up a bit, but I really liked it. The atmosphere in the team is great, the country is great too, the new experience eliminated that fatigue. The family was also together. I had a great time.

– Was it still more of an adventure and fun, or did you still have to work at full strength?

– Everything was very professional there, if you go there around 20, everything would be super good. There are professional players and coaches who have worked in the Raptors system, as well as medical staff. And so when you’re a veteran, you can do something less, I myself thought before going that maybe it would be possible to do something with half a leg, take a break, go to the match and that’s it. However, meetings were held, training sessions were recorded, we gathered at 1 pm and finished the training session at 6-7 pm. Maybe a little too much at that age, but great when you’re younger.

– After going there once, would it be easier to settle down and return again?

– I don’t know, mine was a different situation. There were no Europeans with us, only Danilo Džuričičius played, but his mother is Canadian, only his father is Montenegrin, he is no longer European, just his last name. During the entire league, there were maybe 3-4 Europeans at most.

– Before going to Canada, had you heard anything more about their league, or were you not even too interested?

– I wasn’t interested in anything, I was busy with my own affairs in Romania (Smiles). That’s why I thought everything would be calm, but I got to a high level, emotionally I wasn’t quite ready for it, but you exercise and exercise – you’re used to it after all. I came back smiling, albeit somewhat tired. I really don’t regret it for a second.

See also  He returns: Arnold Schwarzenegger is filmed in the Netflix spy series

– And how did the Voluntary team, with whom you could extend the contract for another year and finally did it, look at your departure?

– Of course, they were unhappy, but I said that I have a “plus”, if they let me go, I will also look at that “plus” favorably. Even if someone makes a similar offer, I will stay with you. But if they told me not to go, not to do nonsense, I would also choose something that is comfortable for me, I would not look at friendships.

I liked the Volunteer team, I told them that, but I had made a promise to a friend and it would be rude not to keep it. They talked, looked a bit skeptical that I played a lot, but in the end they were also satisfied. I rested for two weeks, now I will go to Romania after recovering both emotionally and physically.

– Did you feel that if you wanted to change the club, you would have found an option easily?

– I didn’t even go to the market, there was an option in Turkey, but it would have to wait until the end of August, almost until the departure. In Romania, there were also people who were interested and offered more, but everything suited me here, I liked it, why bother here for something and go into the unknown. I didn’t think too much and I didn’t browse the market.

– The Shooting Stars team is still playing in the championship, how did the club react when you said you wanted to leave earlier?

– They wanted me to stay, it’s a completely different basketball game there, I helped them slow things down a bit, because they are all used to running, jumping, and throwing. There were two leaders in my position, I had to stay with one and the other so that they wouldn’t fight for the ball. In the end they managed to get a decent player who agreed to come, so they told me: if you decide to leave, that’s fine. Our main player got injured, I played two more games and left.

– Did it take a lot of effort to adapt to their style of play?

– I had to adapt, but I probably didn’t adapt that well (Smiles). I want things to be calmer, you don’t chase after them while they run to the attack – you to the defense. I didn’t laugh at all the knowledge, it was the most important thing here (Laughs).

– What pros and cons do you see in your extended season in Canada?

– There is an emotional thing, after the season in Lithuania you want to spend almost the whole summer, go on vacation with your family. It works. You don’t see friends, family, grandparents during the year, you see them once a year – that’s the most painful. If I still had to go directly back to Romania from Canada, it would be very difficult emotionally. Now everything looks good, but we will exercise, we will see if the depression does not come in September.

– You went to a friend with the idea of ​​resting, did you manage to implement this plan at least partially?

– We explored Toronto itself a bit, we went to Niagara Falls. I would like more, but the distances there are not long, we flew for 5.5 hours to one match. You won’t get along as simply as we are used to in Lithuania, where you make up your mind and go. There is more of an NBA model: you fly once and play a few games in some zone.

– You say that this kind of experience is probably the only one and the last. But if there was such an opportunity next year, would you consider it?

– I don’t even know, maybe I wouldn’t go again, but you never know. Maybe next year will come and you will want it again. But maybe you should rest.