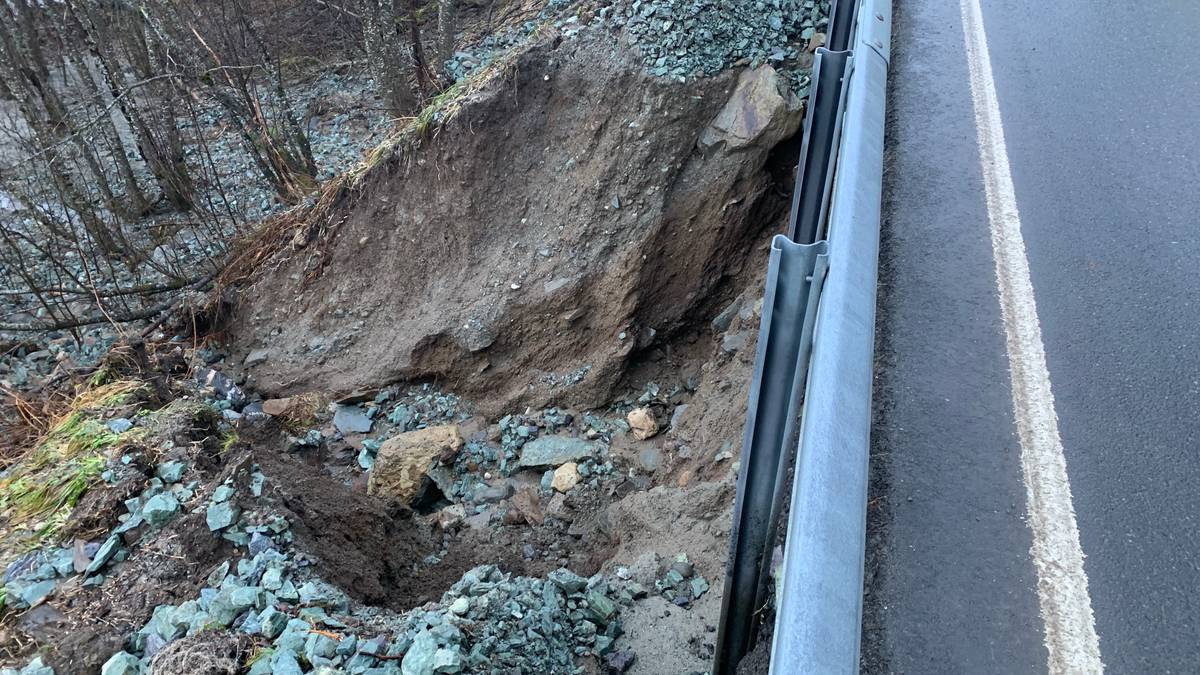 – There will be extensive work to sort things out again. The contractor is probably full of work today and tonight. Maybe longer, says construction manager in Trøndelag county municipality, Marit Børø.

She stands between Storås and Garberg on county road 65 in Orkland municipality.

On one side of the road where she stands, a flooded stream has washed away large parts of the driveway to a home.

On the other side of the road, the water has dug away large parts of the roadside. It is as far as the crash barrier does not hang in the loose air.

There have also been landslides in several places along this road as a result of heavy rainfall over the last 24 hours.

And this is not the only road affected.

Since Tuesday night, there has been a chaotic situation on the roads in parts of Trøndelag and Møre og Romsdal.

On Wednesday morning, the following roads are closed:

Fylkesvei 65, where construction manager Marit Børø is located, was also closed until 02.20 on Wednesday night.

By then, contractors had managed to clean up trees that landslides had taken out into the roadway, and in addition, the water diverted from the stream down into the ditch and a manhole.

– They prevented the road from being destroyed, but it will be a big job to get the landfill fixed outside and the landfill inside, says Børø.

Road must be dug up

Also on county road 714 between Stokkhaugan and Gjønnessætra in Orkland, the contractor is full.

Here, too, a stream has gone over its banks and washed away parts of the road around a gutter. The ground is washed away under the road.

According to newspaper Hitra-Frøya on Wednesday morning there was little or nothing that supported the asphalt anymore.

The contractor is now working on digging up the road and laying a new and larger gutter.

There is a detour via Kyrksæterøra, but not for vehicles over 11 meters in length. This means, among other things, that lorries with salmon from Hitra and Frøya have to wait indefinitely.

Also on county road 10 Lensvik and on county road 6652 Byneset there was a landslide on Tuesday night. On both of these roads it is possible to pass.

Earlier Tuesday night, a landslide was also reported over the Nordlandsbanen, which was closed after a train ran in and through a landslide between Skatval in Stjørdal and Åsen in Levanger.

The heavy rain has led to new precipitation records being set in several places in Trøndelag.

At Voll in Trondheim, it has not rained so much since 1956.

And in Trondheim, the water has also created problems.

Vikeelva went over its banks in Ranheimsfjæra on Tuesday night and several roads were also flooded.

In addition, there have been reports of flooding in a number of basements.

Siri Slettås, who is the general manager of Slettås Vann- og Avløpsteknikk, estimates that they have had over 40 calls between 15.30 on Tuesday and 05.30 on Wednesday. And on Wednesday morning, the messages continue to flow in.

She describes the last 24 hours as violent.

– It has been chaotic and I do not really have an overview of how many inquiries there have been, says Slettås.

– Since we started in 2014, I have never experienced a similar day.

Slettås is set on the whole day, and maybe more, going to clean up.

Enormous amounts of water have also been reported in Trondheim’s neighboring municipality, Malvik.

In Surnadal on Nordmøre, the river Surna almost reached the levels of a 50-year flood during the night, with 587 cubic meters of water per second. This river is considered flood-sized at around 200.

– It’s quite dramatic. It’s extra challenging when it’s night. Then it is unclear what the scope is, says emergency manager in the municipality, Håvard Stensønes.

In the river Bøvra in Bøverdalen, the water has also been high.

The waterworks has been shut down, and people have to boil their drinking water as the water quality is uncertain. Several houses have had water in the basement.