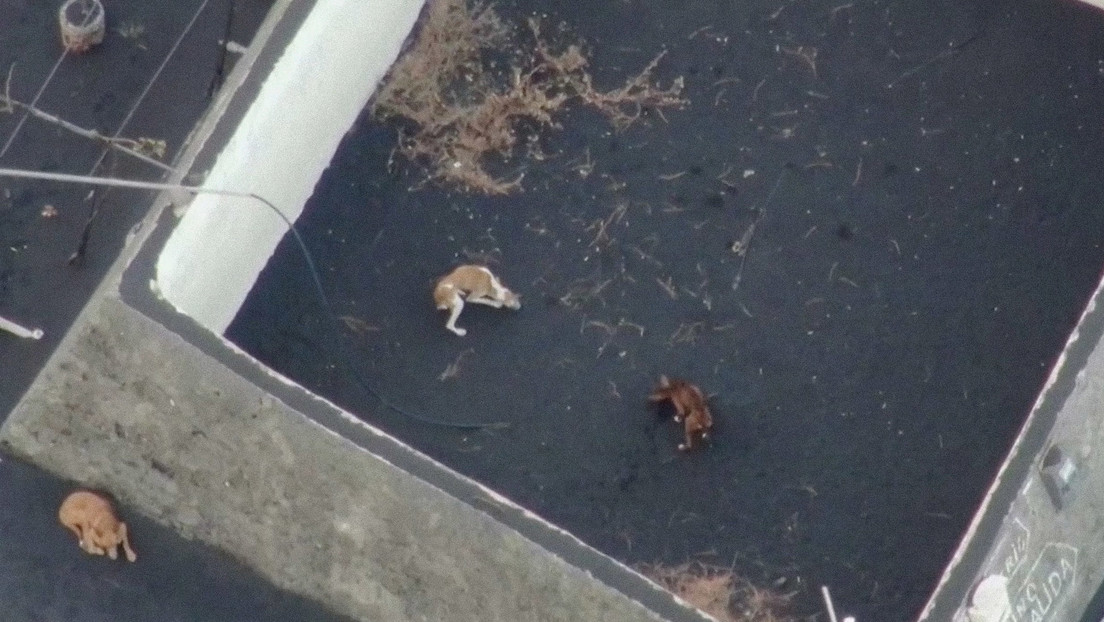 After the camera of a drone found no trace of the hounds, a video began to circulate showing a banner hanging in one of the ponds where they were trapped: “The dogs are fine.”

The eruption of the La Palma volcano, in addition to the human drama that the island’s population is suffering, will also leave behind the strangest and most unexpected rescue that has been seen in a long time. Apparently, the six dogs that were trapped by the lava for several weeks have been rescued and are doing well.

The situation of the dogs went viral both in Spain and in other countries, after the NGO Leales.org captured images through a drone and gave the voice of alarm about the animals trapped in two ponds in Todoque, a town that has been completely destroyed by lava emissions from the still unnamed volcano of Cumbre Vieja.

Everything took an unexpected turn this Thursday, when a video began to circulate on social networks that showed a banner attached with stones to one of the ponds in which it could be read in red letters: “Fuerza La Palma. The dogs are fine. A Team”. The recording, made with a drone, shows the empty ponds, the banner and images of the dogs at the end, all accompanied by the music of the legendary 80s television series, the ‘A Team’.

The ‘A Team’ to the rescue on La Palma. Someone has gone to where the trapped dogs were, that is how the tracks found in the area have betrayed him even though it is forbidden, he has rescued them and has left a sign: «Fuerza La Palma. Dogs are fine. A Team » #LMK#LaPalmapic.twitter.com/flDO4eswdw

The situation has filled animalists, activists, anonymous citizens and even the authorities with surprise. Everything began to take on a mysterious turn on Wednesday, when a drone failed to locate no trace of the dogs. It was then that speculation began as to whether the animals had somehow managed to escape through the ash and rocks, which were already beginning to cool.

At that moment, the banner announcing the rescue went unnoticed. Apparently the wind had moved it until it was turned around, so that what it had written could not be read.

However, there was another detail that the camera of this device managed to capture: some footprints that appeared to be human and that they were within the exclusion zone decreed by the authorities. In this area, entry has been prohibited for weeks due to the risk posed by lava, its high temperatures and the pyroclastic rain caused by the volcano.

The drone that captured the tracks belongs to a Galician company that had offered to rescue the animals through an unprecedented operation. The plan consisted of rescuing the animals, one by one, with a drone that would carry a net and a bait to bring them in and take them out through the air.

Until then it had ruled out a helicopter intervention due to the danger posed by pyroclasts and also access on foot due to the high temperatures of the lava flows that surrounded the area.

The company offered itself to the Canarian authorities and, last Sunday, three of its technicians traveled to the island. On Tuesday they got permission to carry out the rescue and on Wednesday they were surprised by the disappearance of the dogs.

The dogs trapped in ponds in the exclusion zone of the volcano on La Palma, have disappeared when they were rescued by drone. One possibility is that they have fled through the cold lava. Who is responsible for the abandoned animals on the island? pic.twitter.com/kKVvBkJ9WO

Along the way, activists and citizens had joined in the unanimous cry for the animals to be saved. A fundraising platform had managed to gather 12.000 euros to pay for the operation of the Galician company, which ad that he would not charge for his work and that he would donate the proceeds to the entities committed to the protection of the animals affected by the eruption of the volcano.

See also  The case of a group that run a drug business: acted through couriers, kidnapped a driver

What about the stealth rescue operation?

What is known so far about this bizarre rescue operation is that it would have been carried out last Sunday night, taking advantage of the moonlight. A group of people would have entered the exclusion zone, took the dogs and left the banner, which was later recorded with a drone, to spread the images that have already gone viral.

Although the identity of the members of this ‘A Team’ is unknown, according to eldiario.es, four of the six rescued dogs would already be with their owners, while two others would meet in an animal shelter.

The owners of these dogs would be hunters, according to what aim the specialized medium Club de Caza. According to him, from sources close to the owners, the animals had not been abandoned, but were hunting in that area when the eruption occurred and they fled.

In addition, he explains that the owners did not have access to them or knew their location, until the complaint from Leales.org went viral. According to this exposition, since they knew where their dogs were, they were several days planning the rescue. They believed that they could access the place “without any danger” and decided to take action because, in addition, “a movie was being made with the drone”.

Despite what has transpired so far, the unknowns continue. If they were rescued on Sunday, why did it take three days to verify their disappearance? If the area is constantly being monitored by drones, how is it possible that no one noticed the presence of the banner until it was released this Thursday?

But above all, if its access on foot was as impossible as it was maintained all this time, how could ordinary people have access without special equipment and without anyone knowing about it? Although it was elucidated that the temperature in the surroundings could exceed 1,200 degrees, it is now known, from the measurements made by the Galician drone company, that there could be areas around 40 or 60 degrees, a temperature that would have decreased with the passage of the days.

The authorities describe what happened as reckless, in addition to the fact that the authors of the rescue could have incurred a offense of disobedience When entering a forbidden zone, this is precisely what would be behind the group has wanted to remain anonymous to date.