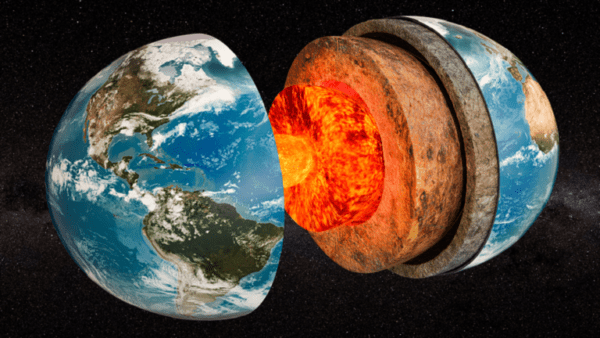 Located 3,200 miles below the Earth’s surface, our planet’s inner core is a ball-shaped mass composed mostly of iron responsible for the Earth’s magnetic field.

No human or machine has ever traveled this distance under the earth’s surface because the depth, pressure and temperature make it inaccessible.

In the 1950s, researchers suggested that the inner core is solid, as opposed to the area of ​​liquid metal around it. But a new study suggests that this inner core is, in fact, an array of liquid, soft and solid structures that vary across 150 miles of mass, according to study leader Rhett Butler, a geophysicist at the University of Hawaii.

The subsoil is composed of layers like onions. The inner core of iron-nickel has a radius of 745 miles, or about three-quarters of the size of the Moon, and is surrounded by a liquid outer core of molten iron-nickel about 1,500 miles thick.

The outer core is surrounded by a blanket of hot rock 1,800 miles thick and covered by a thin, cold rock crust at the surface.

With the inner core inaccessible, researchers had to rely on the only available means of detecting deeper earthquake waves.

“Seismology, illuminating earthquakes in the crust and upper mantle, observed by seismic observatories on the Earth’s surface, provides the only direct way to examine the inner core and its processes,” Butler explained.

As seismic waves move through different layers of the Earth, their speed changes and may be reflected or refracted depending on the minerals and the temperature and density of that layer.

To better understand the features of Earth’s inner core, Butler and co-author Seiji Tsuboi, a research scientist at the Japan Agency for Marine Earth Science and Technology, used data from seismometers directly corresponding to the site where the earthquake originated.

They used the Japanese supercomputer Earth Simulator to evaluate five binaries to cover the inland core region on a large scale: Tonga and Algeria, Indonesia and Brazil, and three regions between Chile and China.

Scientific models indicate the presence of contiguous regions of hard, soft and liquid or soft iron alloys in the upper 150 miles of the inner core. “This places new constraints on the formation, thermal history, and evolution of the Earth,” Butler explained.

The researchers noted that this discovery of the diverse structure of the inner core could provide important new information about the dynamics at the boundaries between the inner and outer core, which affect the Earth’s magnetic field.

“Knowing this frontier state from seismology may enable better predictive models of the geomagnetic field that sustains and protects life on our planet,” Butler said.

The team now plans to model the internal infrastructure in more detail using the Earth Simulator supercomputer so they can see how it compares to different properties of our planet’s geomagnetic field.

The research was published in Science Direct.

See also  There may be an undiscovered planet the size of Earth or Mars orbiting beyond Neptune, according to new study