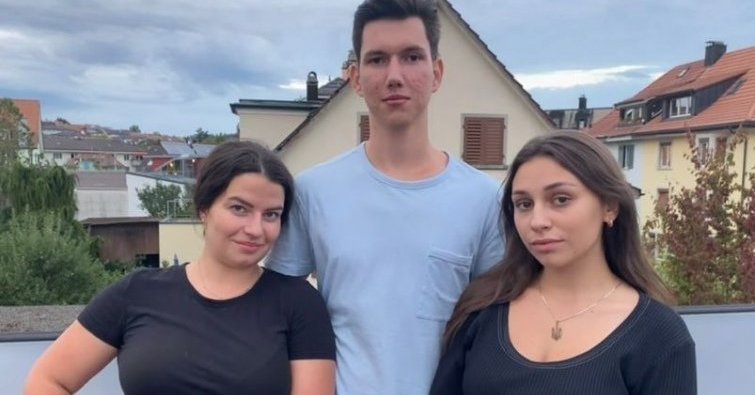 “A Russian company that has been living in Zurich for more than a year attacked refugees from Ukraine with accusations of oppressing the Russian language.

The Russian-speaking man, who introduced himself as Belarusian, first pinned a 20-year-old student from Ukraine against the wall. He later punched her when he heard she was from Ukraine. We managed to capture a fragment of the Russian attack,” the girl said.

One of the attackers accused the Ukrainians of insulting the Russian language, and when he saw that one girl had started filming, he tried to knock the phone out of her hands.

In the video, one of the attackers is also heard telling the Ukrainians to “go home and die there”.

Sofia Sukač, one of the students, told the story of the attack in detail to the publication “Ukrainska Pravda”.

According to her, on August 13, Ukrainian students Jana Sončkivska, Sofia Sukač and Denys Šarlaj were attacked in the center of Zurich.

“Street Parade, a techno music festival, took place today in Zurich. We didn’t go to the festival, but after it we went to the city.

As we walked to the station, we heard a voice that sounded like someone familiar. Denis asked: “Is it Belarusian or Russian?” We said among ourselves that the language is similar to Belarusian. So those men came up and said, “No, it’s Russian,” Sofija Sukach said.

While walking through the city, a conversation started between the companies. One of the men said he was from Moscow, while the other introduced himself as Belarusian.

See also  Is it true that honey has the same efficacy as cough medicine? page all

“I cannot claim that he was Belarusian, because Russians in Europe pretend to be Ukrainians or Belarusians. But that’s how he introduced himself.

I spoke to him in English and did not switch to Russian. He began to accuse me of condemning his and his friend’s speech,” said Sofia.

Sofia replied that the friends just heard a familiar language, but did not address them.

Jana: He started saying in his native Russian that it’s not the people’s fault, it’s all about the politicians.

“You stifled my speech!” I have been here since 1995. why are you here Why did you come here to oppress my speech?” Jana quoted the attacker as saying, adding that the attackers also used swear words.

At that time, Denys and Jana were talking to a Russian who told them that “ordinary people” were not to blame for the war.

“He started saying in his native Russian that it’s not the people’s fault – it all depends on the politicians.”

We Ukrainians didn’t say a word about politics, about the Russian language, about Russia, about their army, or about the people,” Yana recalled.

The man, who introduced himself as Belarusian, asked Sofia’s age and tried to find out why she came to Switzerland.

“I said that because missiles are flying into my country from his friend’s country and from his country. That must have pissed him off. I also added that I study here. He asked what I was studying,” the Ukrainian woman said.

After saying that she was studying journalism, the girl received even more anger and was pinned against the wall.

According to both girls, at that moment the man shouted: “You came here to insult my language!” You girl are humiliating Russians, I’ve been here since 1995 and you, a 20 year old, have no right to humiliate me. I live here”.

“The man who introduced himself as a Russian turned out to be more adequate. He told Jana that there was nothing he could do about this war, that he had been living in Switzerland for many years. And the other just pressed me. I couldn’t move, I was scared, I started screaming and begging to be let go,” said Sofia.

Hearing the scream, Denys and Jana tried to defend Sofia. Then, according to the students, the attacker approached Denys.

“We pushed him away and a Russian-speaking Belarusian approached our friend, asking if he was from Ukraine.

He replied, “Yes.” Then the Muscovite hit him in the face for the first time,” Jana recalled.

Then she started filming the conflict.

In the video, the gunman can be heard saying, “Go home and die there,” and the girls reply that their house is being bombed by the Russians.

After that, Russian-speaking girls approached the company and began to ask them not to publish the video on the Internet, and Jana threatened to call the police.

Finally, a passer-by wanted to call the police, but the Russian-speaking men quickly disappeared in the crowd. Students told about the incident on social networks.

They asked European leaders to pay attention to the problem.

“I left home, family and work in Ukraine because of the war caused by the Russian Federation. Our universities are being bombed, we continue to study in Switzerland. We have found refuge and are extremely grateful to Europe for the incredible opportunity to live.

Instead, they ran away to find a better life and still cling to the idea that we are demeaning their language. They see a physically weaker victim and attack, but are afraid to show their face to the world. Therefore, I am asking for as much publicity as possible,” Jana wrote.

Ukrainian students also decided to file a complaint with the police.