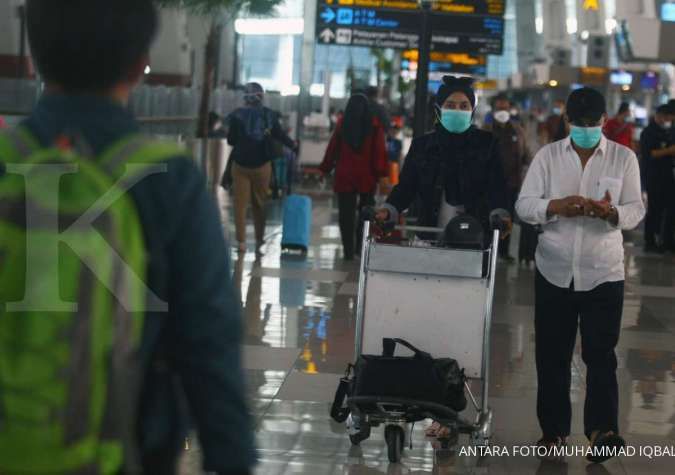 KONTAN.CO.ID – AS MUCH Nine passengers on the plane that arrived at Pontianak Supadio International Airport, West Kalimantan, tested positive for Covid-19. This was known when the West Kalimantan Covid-19 Handling Task Force (Satgas) team conducted random inspection tests on a number of passengers on Tuesday (22/6/2021).

Harisson said that of the nine passengers on the plane who tested positive, two of them used a swab test result letter polymerase chain reaction (PCR) fake.

The letter contained the name of the West Kalimantan Governor’s Office Clinic that issued it. However, after checking, it turns out that there is no data from the person concerned.

“On the Lion Air plane on Tuesday, June 22, 2021, there were two positive Covid-19 passengers, they brought a PCR swab certificate at the governor’s office, after we checked it turned out to be fake,” Harisson told reporters, Friday (25/6/2021) .

Regarding the findings, his party will coordinate with the security forces so that they can be thoroughly investigated. While the nine positive passengers are currently undergoing quarantine at Upelkes West Kalimantan.

The two passengers who brought the fake PCR certificates were known to have the initials RN and SH. They claimed to have received the letter from a broker in Surabaya at a price of Rp. 800,000.

“I asked the traveler, (he said) there were people who offered PCR without a test, I asked, it was guaranteed not to be safe, the person concerned made sure it was safe, because previously there were also people who got PCR letters without testing,” RN told reporters.

RN and SH, who are residents of Pontianak City, previously came to East Java to take their children to a boarding school.

They were interested in the broker’s offer, not only because it was considered more practical, but also because they could return to Pontianak using an airline.

The Health Office asks the security forces to thoroughly investigate

After hearing the confessions from the two passengers, Head of the West Kalimantan Health Office, Harisson, asked the security forces to thoroughly investigate. Because, apart from breaking the law, the impact is very dangerous. Because, the transmission of the virus can be more widespread due to the actions of these irresponsible people.

“There has been a confession from the passengers of the Lion Air flight from Surabaya to Pontianak. They were actually offered by brokers to get fake PCR certificates. I hope the authorities take legal action to look for these brokers,” said Harisson.

“If it’s like this, the security officers at Juanda Airport don’t know. They (brokers) are blatant,” he added.

With the findings of the nine positive Covid-19 passengers, Harisson said that the airline must also be responsible. Therefore, Lion Air and Citilink airlines that carried the passengers were also given a sanction in the form of a ban on bringing passengers on the same route for the next week.

“The two airlines are not allowed to fly passengers from Surabaya to Pontianak for 7 days. But they can still fly if they carry cargo,” he explained.

“One of the governor’s regulations, one of which decided to extend the entry requirements to West Kalimantan for airplane passengers, which is to continue using the negative results of the PCR swab,” Harisson explained

This article has been published on Kompas.com with the title “Conceded, Passenger Airplane Positive Covid-19, Caught Using Fake PCR Letter”