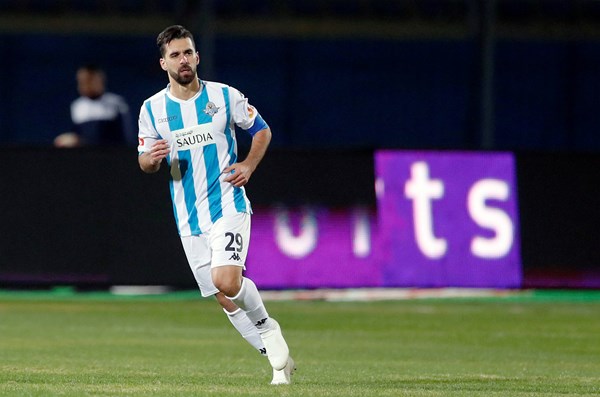 Counselor Hani Zahran, the lawyer in charge of defending Abdullah Al-Saeed, the Pyramids player, against the cases brought by Al-Ahly Club against the player, confirmed that Al-Saeed resorted to the International Football Association “FIFA”, for the complaint of the “Red Castle”, for violating the degrees of sports litigation, And resorting to the normal judiciary, in a case related to a sports contractual dispute, which has not been decided by the Court of Arbitration for Sport (CAS).
Counselor Hani Zahran is in the Netherlands to complete the procedures for initiating a lawsuit against Al-Ahly and the Egyptian Professional Players Association, headed by Magdy Abdel-Ghani, because of its failure to play a role in defending the player’s rights.
It is known that Abdullah Al-Saeed moved to Al-Ahly Jeddah, Saudi Arabia, in 2018, and a penalty clause was signed, not to return to the Egyptian League, until the end of his contract for 3 years, but the player “disengaged” his association with “consensual” with the people of Jeddah, and returned to Egypt to join At the Pyramids Club, Al-Ahly filed a complaint against Al-Ahly Jeddah and the player, for violating the penalty clause, but FIFA rejected the complaint for its illegality, and for not violating the same condition, in the transfer of Al-Saeed to Pyramids.
Al-Ahly of Egypt resorted to the Dispute and Settlement Center of the Egyptian Olympic Committee, which ruled against the player to pay two million dollars, and the club implemented the ruling through the natural courts, which decided to freeze Abdullah Al-Saeed’s money last June.
In exclusive statements to Al-Ittihad, Hani Zahran confirmed that he traveled to Zurich last week, with the aim of choosing a “Swiss arbitrator” to plead before the Swiss Federal Court, to which Al-Ahly resorted.
He pointed out that Al-Ahly’s haste in the case, and not waiting for a decision on it from “CAS”, and resorting to the dispute center and the unrecognized settlement from “CAS” itself, comes to the “Red Castle” certainty that the ruling will be in the interest of the player, after “FIFA” acquitted him, as My grandmother recovered.
He added: I am currently in the Netherlands, in order to set a date to file a new official complaint against Al-Ahly, with the International Federation of Professional Players, to support the player in the illegal pursuit of him, in addition to the failure of the Egyptian Players Association, to stand by Al-Saeed in the same case.
Zahran revealed that the player had filed a complaint with FIFA because of what he was exposed to, and because Al-Ahly did not respect articles 58 and 59 in the International Federation’s list, in addition to the player’s tendency to request compensation, if the “Cass” decided to acquit him, stressing that the Court of Arbitration for Sports suspended the consideration of any communications in The case, pending a ruling by the Swiss Federal Court, to resume its consideration following the court’s ruling.

See also  A match in the English second division is more expensive than the Champions League final.. these are the returns