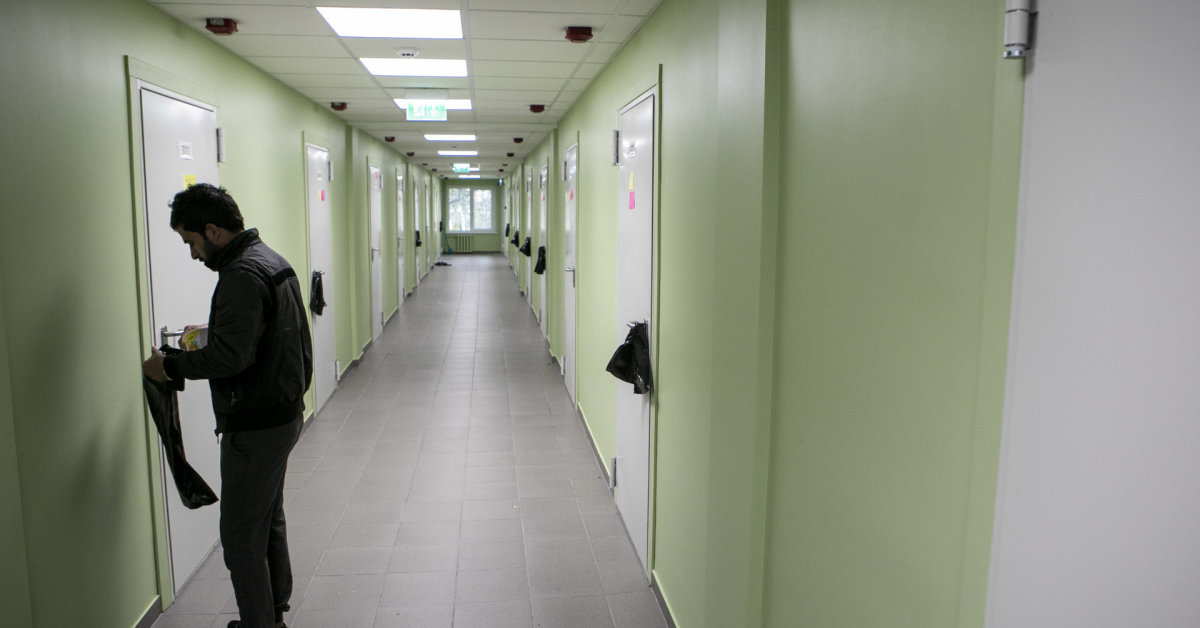 The building in Naujininkai has recently housed homeless people who have come here. However, after the reconstruction of the hostel on A.Kojelavičiaus Street was completed, they returned there, and this building became the place in Vilnius where migrants who crossed the Lithuanian border illegally would live.

According to the Ministry of the Interior (MIA), this is the only place in the capital that is currently planned and where migrants crossing the border from Belarus illegally will settle.

Now this one is called the Novice Refugee Reception Center.

It is promised that both here and at the Refugee Reception Center in Rukla, conditions will be created for children to study and engage in various activities.

VIDEO: 80 migrants have been accommodated in the Naujininkai district of the capital – comments by M. Navickienė

The Minister of Social Security and Labor Monika Navickienė stated that the first migrants had already been transferred to the former Vilnius hostel, about 80 people had come here. Of these, 32 children and 9 infants.

“The conditions are well adapted, there are well-equipped bathrooms, a kitchen, and the migrants will prepare their own food according to their needs, as is the case in Rukla. The installation of a medical point, a cabinet where doctors will consult twice a week is also being completed.

Basic needs will be taken care of. As in Rukla, we will have a team of social workers, about 17 people work here, who will identify the basic needs and people will be provided with and guaranteed those needs, ”said M. Navickienė next to the new migrant camp.

See also  Coronavirus: The US Drug Regulatory Body Authorizes the Use of Pfizer's Covid Vaccine in Children Five to 11 Years Old | Society

According to the Ministry of Social Security and Labor (SADM), the center accommodated 83 migrants on Monday, including 38 children and one woman with a disability.

The majority of migrants living in Naujininkai (73) are Iraqis, as well as 5 Syrians and 5 Afghans. Migrants came to Vilnius from Medininkai modular houses (63) and Kazitiškis Ignalina district (20). It is planned that about 200 more migrants will be accommodated in Naujininkai in October.

The majority of migrants living in Naujininkai (73) are Iraqis, as well as 5 Syrians and 5 Afghans.

According to the Minister, talks are underway with non-governmental organizations on adult employment.

The store will be open

According to the Minister, the migrants will prepare their own food, the food bank has taken care of the food stocks for the time being, but soon, on October 4, a store will be opened where people will be able to buy their own products.

Migrants will be provided with 2.5 euros per day for meals – the amount will reach 77 euros per month.

See also  They find murdered and buried Camila Tarocco, the young woman who had disappeared in Moreno

“The third floor is occupied, the others are managed, we are going to bring about 200 more people here. Most of Medininkai modular houses are in terms of vulnerability, namely groups with children, especially with babies, because it is not so comfortable to live in modular houses with babies. We strive for people raising the youngest children to live in the building, ”said M. Navickienė.

Assures that the protection is adequate

The Minister assures that the protection of the campsite is ensured, the needs of the surrounding residents are taken into account.

“The territory of the Refugee Reception Center will be guarded around the clock by police officers. Police patrols in the surrounding streets will also be stepped up. The purchase of security services is currently announced. When it happens, the safety of the facility will be taken over by the security service from about mid-October.

Area lighting will be installed in the territory of the migrant camp. The territory and its accesses will be monitored by video surveillance cameras, ”says SADM about the protection of the camp.

So far, according to M. Navickienė, there are enough two places for vulnerable groups of migrants – families with children, in Rukla and Vilnius. There is no need for more yet, but the state is said to have property in various places, but talks are not taking place.

See also  Researchers discover that due to the warming of oceanic waters, planet Earth shines less than 20 years ago

Warm clothes are available, if you need more – will buy

Beatričė Bernotienė, the director of the Refugee Reception Center, stated that the third floor of the building had been installed, so there was no need to invest here. Due to the installation of other floors, calculations are still ongoing, estimates are being made. And a tender for the installation will be announced.

From next week, 16 school-age children will start learning Lithuanian. Vilnius Lithuanian House will take care of their training. It is also coordinated that children have other activities – art, sports.

She also said that warm clothes and shoes were already prepared, part of which was donated by the community, which responded to the requests. However, if necessary, a contract will be signed, they will be bought.