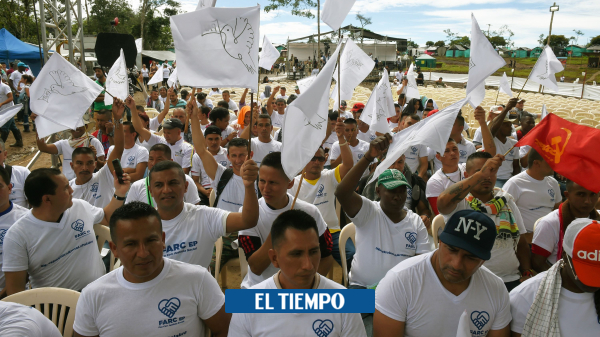 The priest Francisco de Roux remembers that when the delivery of weapons by the FARC guerrillas ended, on June 27, 2017 in Mesetas, Meta, two young men approached him. They told him that they had handed over their security to society and the state. “Do you think we can believe in them? We are afraid”, they told them.

Three years later, around two hundred ex-combatants have been killed. For the Farc party, there are 212, 10 more than those who until now were known. This figure includes cases that occurred after the Cartagena signature, but before the accreditation of the Office of the High Commissioner for Peace, and for that reason it is different from that of the authorities. It also collects murders abroad, mainly in Ecuador, explains Camilo Fagua, the FARC’s human rights coordinator lawyer.

The Attorney General’s Office includes in the list of crimes against exFarc only people accredited by the Government, so its accounts indicate that 195 ex-guerrillas were murdered. De Roux, chairman of the Truth Commission, says that regardless of the number, it is “a very profound tragedy.” “We have to protect them so that the peace of all Colombians works” and that those who are still in reincorporation have no doubts.

(It may interest you: Short-term peace policies are 62 percent behind)

The accounts of the Prosecutor’s Office indicate that 195 were murdered.

For Eduardo Pizarro, emeritus professor of the National University and former director of the defunct National Commission for Reparation and Reconciliation between 2006 and 2008, these crimes are related “to the absence of a real control of the State in the peripheries of the country, where there is all kinds of illegal economy ”. Although that is the context, he considers that it is “very difficult to define clear patterns” in these crimes.

In response to EL TIEMPO, Deputy Prosecutor Martha Janeth Mancera assured that “There is no criminal pattern towards the reincorporated population” and that, in about half of the cases in which clarification has advanced, “the cause has been other than being a former combatant.”

Fagua assures that this assertion must be demonstrated with sentences. The Farc party counts 274 facts between homicides, attempts and disappearances. They consider that the 39 convictions do not show a high level of clarification, in which they do not accept the accusations to alleged perpetrators until they are convicted by justice.

For Pizarro, several hypotheses must be taken into account to understand these crimes, from other demobilization experiences.

One is the participation of ex-guerrillas in programs to substitute illicit crops in areas where the war for control of these incomes persists.

Another is the claims about land formalization in the regions where the ex-guerrillas are. One more is the “justice by own hand” of sectors that were victims of the FARC guerrillas.

Finally, it points out how possible that illegal groups try to recruit these people and by refusing, threaten or kill them.

(More of your interest: The FARC asks Bachelet for assistance in the face of crimes against ex-combatants)

This multiplicity of factors “makes it difficult to speak of patterns”, concludes Pizarro: “If you do not have patterns of victimization, the protection of the demobilized becomes almost impossible.”

Although Deputy Prosecutor Mancera has stated in different scenarios that the majority of victims are men, in remote rural areas where there are territorial disputes over illicit economies, for María Victoria Llorente, director of the Ideas for Peace Foundation, This is not enough, since “it is of a generic level that does not allow us to truly understand the motives behind these crimes,” Llorente assures us.

For Fagua, it is clear that in 90 percent of cases the modality was that of the hitman. “We believe that the pattern is related to violence of a political nature against a group of people who signed an agreement, who have a special degree in international law and that the State has unprotected,” he says.

Security guarantees were implemented in a fragmented, non-articulated and not very participatory manner

The most recent accounts of the Prosecutor’s Office, as of June 12, indicated that 68 percent of 239 affectations to ex-combatants (threats, murders, displacements, among others) are concentrated in six departments: Cauca (45), Nariño (30), Antioquia (28), Norte de Santander (21) and Caquetá (20). These coincide with those that, according to the Farc, concentrate more murders (see graph).

One difficulty in protecting the reintegrated is in their dispersal. Although in former ETCR there is a record of only two homicides, only 2,877 of the 12,767 ex-guerrillas in reincorporation are in those 23 spaces. The rest, according to the Special Jurisdiction for Peace (JEP), are in at least 522 municipalities in the country. For Llorente, this shows that individual reincorporation has prevailed over collective.

The murder of Mario Téllez was considered the 200th, until the records were reviewed.

How are we going to invite others
to put down your weapons
if these murders await them? We should take care of them because they are the ones that indicate to others that it is possible to go out

The phantom of the UP, a reflection?

The murder of ex-combatants after the peace processes is a historical constant, not only in Colombia, but in the world. However, what is happening now in the country has particular characteristics that make it different from those of the past.

In the 1980s, when the Patriotic Union (UP) party emerged from the peace negotiations with the government of Belisario Betancur, it faced a reality “that was not clear,” explains priest De Roux.

By then, both the FARC guerrillas and the Colombian Communist Party adopted the “combination of all forms of struggle”, for which while there was a political community made up of civilian sectors of all kinds, It was perceived that it still had an armed wing, the guerrilla that did not demobilize then.

While the UP tried to make legal policy, the FARC continued with their violent actions, so the way out (way out) that that match marked was not entirely clear, explains De Roux.

Today, however, there is no combination of forms of struggle. The Farc laid down their arms and became a political party without an armed wing, so the president of the Truth Commission points out the importance of believing in the commitment of peace of the reinstated.

Eduardo Pizarro agrees that “the massacre against the UP is profoundly different from what the Farc is currently experiencing.”

Although the UP party was the “exit door”, “due to a wrong decision of the FARC leadership they did not take the step and left the UP dramatically exposed in a climate of dirty war” and the emergency of paramilitary groups.

Although he indicates that the direct responsibility was of those who perpetrated the crimes against nearly 3,000 UP militants, he considers that the Farc and the Communist Party have part of the political responsibility for these acts.

Today, state agents have little incidence in the murders of ex-combatants, except in the case of Dimar Torres, says Pizarro. In the 1980s, on the other hand, “without a doubt there was a relationship between state agents and paramilitary groups at the regional level.”

At present, Pizarro insists, crime patterns are not clear: who, why, under what orders are committing these murders and other threats.