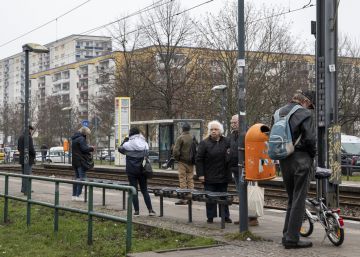 It’s cold that freezes and empties the streets of this dormitory city on the outskirts of Berlin. This is the north of Marzahn, a stigmatized area and the constituency in which the German extreme right triumphs like nowhere else in the capital. Here, just over half an hour from Berlin by public transport, one in four voters chooses the Alternative for Germany (AfD) ballot. And here, in this sea of ​​prefabricated blocks of former East Germany (GDR), the thesis that the support for the extreme right comes from the depopulated field falters and it becomes clear that peripheral disaffection is also urban and, above all, mental.

The north of Marzahn rose in the eighties, when police officers, professors and military officers who were well acquainted with the socialist regime among others populated the so-called Plattenbauten prefabricated Here Vietnamese workers lived and still live, landed in the days of the GDR, to which Russian citizens would join after the collapse of the Soviet Union. Throughout the district, about 240,000 people live and here in the north, about 23,000 in puzzle-buildings built with assembled plates, which give the large mass of bees an orderly hive.

“See this? Everything is broken, nothing has changed since the GDR, ”complains Gunnar Lindemann, deputy of AfD for Marzahn in the Berlin regional parliament with a strong anti-immigration speech. “This” is a cracked cement board that forms the sidewalk. Lindemann justifies the vote protesting his party for the state of the neighborhood, but the truth is that Lindemann’s catastrophic discourse does not match the reality of a landscaped district through which a light rail or tram connects every ten minutes Berlin center, where many houses have been rehabilitated.

But it is equally true that despite the improvements, the streets of Marzahn distill hopelessness. It is observed in the tired faces of the neighbors who come and go to the tram with the work overalls, in the elderly with a walker and the plastic bag hanging on the side, or in the fattened young people who run errands without haste and in tracksuit to midmorning.

In northern Marzahn, AfD obtained 30.6% in the regional three years ago, ahead of Die Linke, the post-communist left-wing party that won 25.5%. Across the district, AfD achieved second place, also in the general and European last year. In the 2017 generals, the extreme right won 12.6% of the votes in the country; more concentrated in the east. Here, as in the rest of the country, AfD especially fished in the fishing ground of abstentionists. Of people who distrust politicians and who have decided to give those who promise to do something different an opportunity. The strategy is also the same as in other areas. When the cold subsides, Lindemann, runs the neighborhood with a mobile office twice a week. People approach and share their problems; It feels heard.

With an anti-immigration speech in an area with few newcomers from abroad and with hardly any conflict, AfD snatched the leadership in this area of ​​the constituency from Die Linke. Together, they account for more than 50% of the electoral support. Bjoern Tielebein, head of the Die Linke parliamentary group in Marzahn-Hellersdorf blames much of the success of the extreme right on what he considers the abandonment of traditional parties in areas like this, which they consider lost. “They are places abandoned by traditional parties. Die Linke and AfD are the only ones that go out here. Social democrats and conservatives stay in bourgeois areas because they find it too complicated and people feel abandoned. ”

Tielebein talks about the social problems of the area, but concedes that there are other places in Germany with more acute needs and yet do not vote for AfD. “But one thing is the material condition of the sites on the outside and another is what people feel inside,” warns the representative of Die Linke.

Steffen Mau, professor of Macrosociology at the Humboldt University of Berlin and former neighbor of a similar periphery in Rostock, offers an explanation that is also very enlightening. Account that unlike in the west of the country, these areas enjoyed some prestige at the time of the GDR. While the city centers deteriorated, these were landscaped neighborhoods inhabited by officials and other privileged. But with the fall of the wall and German reunification in the early 1990s, the perception and discourse of the west was imposed that the peripheries are for those who cannot afford to live in the center and these places are no longer considered attractive. Prestige and the feeling of privilege were transformed into resentment. Author of Lütten Klein: Life in the transformation society in eastern GermanyMau says that “who could, emigrated and those who did not have a better place to go remained.” Frustration grew with a stigma that kept growing.

At the gates of one of the few shops embedded in the basement of a building, Nicole Woisnitza is the vivid image of the socio-political dynamics of the neighborhood. “Nobody takes care of this neighborhood. I’ve been here for 20 years and every year is worse. Politicians do not offer solutions. ” At 49, he is a furniture assembler in an event company. Earn 1,400 euros per month and pay 560 rent. Before, he did not vote or elect the animalist party, but in the last electoral calls, he has voted to AfD because “we have no other choice. Others have shown that they have not done anything in the past 30 years. Next time, I will vote again for something to change, for new politicians to come and for something to finally happen. ” At his side, Verena Becker, 31, with pink hair, who is dedicated to caring for the elderly also for the minimum wage. He nods all the time when he hears his friend. When asked if they would like to live somewhere else, it makes them laugh. “Where? Prices have risen everywhere, ”says Woisnitzh after ten o’clock in the morning, while dodging a drunk who is beating and almost stamping against a poster.

The problem here is not unemployment – about 6% – it is rather the labor poverty of those who get up every morning to go to the pit and at the end of the month receive the minimum wage. 11% of the district earns less than 900 euros per month, according to official figures. This northern area is the epicenter of subsistence. “Only on this street, half receive social subsidies. It’s not that they don’t have a job, it’s that they don’t earn what is necessary, ”says Lindemann, a neighborhood neighbor. A rental of an apartment of 70 square meters can be around 650 euros; a much lower price than what is paid in other areas of Berlin. “They want to put everything they don’t want in the center here on the periphery.”

The low purchasing power is also noticeable in the consumption rate of the neighborhood. The mall has a very soulless air. On the second floor the premises are empty and on the one below, there are hardly any low-cost supermarkets, a travel agency with posters in Cyrillic, an oriental nail studio, a lounge with slots and little else. At the entrance a young Vietnamese sells illegal tobacco.

The demographic evolution of Marzahn is a case of a book. With the fall of the wall and the collapse of the socialist system, many people lost their jobs and emigrated to other parts of the country, in search of a better future. In the mid-1990s, about 50% of the apartments in this area of ​​Marzahn were empty. The situation was so extreme that the authorities chose to lower many blocks, which once had eleven floors and today have four. The empty houses had to be inhabited and flood people began to arrive, people who could not afford to live elsewhere. Thousands of Russian citizens also arrived after the collapse of the Soviet Union and in AfD they have found a party that strongly advocates the end of sanctions and that promotes a close relationship with Russia. Lindemann, controversial over a recent trip to Donetsk It is a clear exponent of that alliance.

Over the years, rents in Berlin have been rising and people with lower incomes went to Marzahn. Now here new homes are now built to accommodate those who no longer have a place in the center of the capital. Three red cranes in full activity today attest to the budding demographic change.

Refugees as an alibi

A political turning point in Germany and also in Marzahn was the so-called refugee crisis of 2015, when more than one million asylum seekers entered the country. Very few arrived here, just a few hundred, who continue to arrive at a refugee center built in the neighborhood. Its presence has been key in the rise of AfD, which has become a problem in the eyes of many voters, something that in Marzahn is not. “They are not criminals, but in summer, when it is hot they sit outside and eat, drink and speak loudly. They are loud and the neighbors complain. They don’t work, but the people in the houses around them do want to sleep, ”says Lindemann, next to the gray refugee center, with a patio, which is empty today. “There are almost no foreigners here [un total de 11%, una de las cifras más bajas de la capital], but we don’t want to end up like other areas of Berlin. People are afraid, women are afraid of being attacked in the street. ”

The arrival of refugees has been exploited, as usual, by means of comparative grievances, among a historically homogeneous population. “People get angry, because they were told that there was no money to fix the heating of the school but to build a refugee center,” says the AfD politician. Isn’t it your job to explain to citizens that the money comes from different items and that it has nothing to do with the other? “Yes, but in the end everything is taxpayer money,” Lindemann shields, who says “refugees are the main motivation of our voters.”