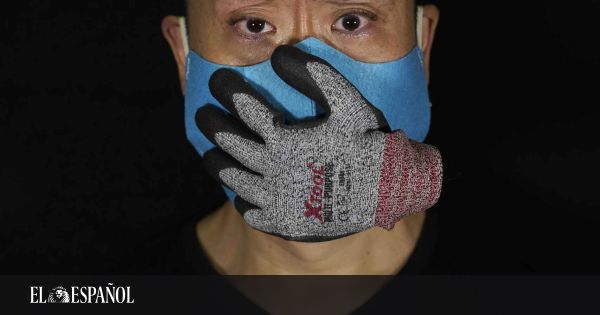 The 80% of Covid-19 patients recover from the disease without requiring hospital treatment, according to the World Health Organization (WHO). But nevertheless, one in six may develop a severe condition with shortness of breath (dyspnea) and loss of voice quality (dysphonia).

According to the Spanish Society of Otorhinolaryngology and Head and Neck Surgery (SEORL), the cases in which the disease is more likely to complicate occur both in the elderly and in those who suffer from certain conditions. Among them, respiratory diseases, immunosuppression, high blood pressure, heart problems or diabetes.

Any respiratory consequence will have effects on the voice. Even the protective measures to avoid contagion (the use of a mask or the maintenance of interpersonal distance, among others) substantially affect its handling, both socially and professionally.

How is Covid spread?

When speaking, expel respiratory particles at high speed, reaching even 160 kilometers per hour. They can reach 12 meters in distance. During singing, for example, they can throw up to 1000 microscopic drops. Many of them will remain suspended in the air for up to 8 minutes.

In addition, the saliva that accompanies the air in the cough or sneeze can cover an area of ​​about 7 square meters. Therefore, protecting the oral cavity with a mask and interpersonal distance in any interaction is crucial to contain the spread of the disease. The British Voice Association has published some special recommendations for choirs, since they are a notable source of contagion.

How does it affect the voice?

Between the general symptoms caused by covid-19 and described so farAlthough these vary between patients, we find severe symptoms (dyspnea, fever and lung injury) or mild (nausea, vomiting, dry cough, fatigue, laryngeal irritation, congestion, headache or loss of taste or smell).

During the onset of contagion, the acute phase or recovery, even for months, a person may have limited breathing capacity. The quality of the voice will also be affected, producing dysphonia.

The symptoms described show loss of voice quality, respiratory fatigue, odynophagia (pain when speaking), feeling of pressure in the chest or tiredness in any slightest movement. Also hoarseness or a dull, choppy, “harsh” or dry voice; laryngeal and chest pain; feeling of stiff throat; pain in the neck or decrease in the tone scale.

Why does it affect the voice?

The voice is voiced air produced by the speech apparatus and amplified in the resonators. The larynx is made up of cartilage, muscle, and mucous membranes located at the top of the trachea and the base of the tongue. Sound is created when the vocal cords vibrate from the exhaled air that passes through them. Therefore, without air, there is no voice.

If the respiratory capacity is affected, the same will happen with the quality of the voice. Dysphonia is an alteration of the voice in any of its qualities, mainly in the timbre, which allows us to differentiate between two sounds.

When you have Covid-19, you are likely to experience prolonged and excessive coughing spells. This tightly joins the vocal folds to allow a strong expulsion of air. Thus, it clears any mucus from the lungs and throat.

Continued coughing can make the vocal cords swollen, stiff, and less flexible. In this sense,voice quality changes, often turning into a harsher and deeper sound. Possibly no more than an awkward whisper.

The speech therapy intervention with people affected or recovered from covid will be based on the type of symptoms and limitations that the person has developed. Also in the strengths it presents.

If it’s about mild symptoms, parameters are recovered with rehabilitation and respiratory practice. If, on the contrary, they are serious and the person has required intubation, the secondary damage is greater. Their quality of life and voice are deeply compromised.

In addition, it is important to learn to handle the voice in certain situations. For example, when using a mask, which causes difficulty in breathing, articulating and resonating. Social distance also influences, which requires adjusting the volume of the voice.

Speech therapy is the scientific discipline in charge of the study, prevention, evaluation and treatment of voice and communication. But not only that, it also takes into account hearing, language and non-verbal oral functions (breathing, chewing, sucking and swallowing).

In these times of crisis it is even more necessary to trust the discipline and its specialists, avoiding professional intrusion. The Spanish Association of Speech Therapy, Phoniatrics and Audiology (AELFA-IF) provides access to supporting scientific materials.


* Lidia Rodríguez García is a professor and researcher in Speech Therapy, and president of AELFA-IF., Of the University of Castilla-La Mancha.

** This article was originally published on The Conversation.