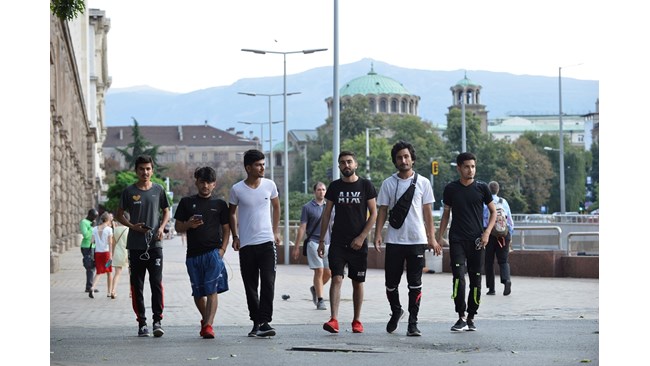 They are already here, they left a month ago

They paid 4,000 euros each smugglers to get there to France, are filmed in front of the fountains and send shots of their loved ones

Boys in small groups gather in the evening near the fountains of the National Palace of Culture and try to communicate with passers-by in broken English, readers of “24 Chasa” reported.

They are not aggressive, they look harmless because they are very young, but they are definitely dirty.

These are the Afghan refugees in Bulgaria.

4,000 euros is the tariff they paid to smugglers to get to Europe, said refugees with whom a 24 Chasa team spoke in downtown Sofia.

All hold modern smartphones in their hands, sitting in groups, usually from 4 to 6 people. One of the places they liked was the garden opposite the Halls. They are sitting in the shade, not worried about the appearance of the team of “24 hours” and the camera directed against them. We start asking them if they are from Afghanistan, but on the second question it is clear that they do not know English.

However, they immediately show us where there is another group in which there is an Abdul who knows English. Abdul and his company are leaning against the fence of the mosque – only there is a shadow.

They eat salad when we talk to them. We arrived in Bulgaria a month ago. We decided to leave after the Americans announced that they were leaving our country. We were sure that the Taliban would come to power, so we fled, Abdul said.

And he explains that they walked from Afghanistan, through Iran and Turkey to reach Bulgaria. They were just men.

explains the Afghan. He and his group paid 4,000 euros each to flee to Europe. The canalists promised to take them to France.

The group was captured by police. The Bulgarian authorities detained and registered them. They are now housed in a camp of the State Agency for Refugees and can stay there for 3 months. They are free to move during the day, but must return by 10 pm.

The groups buy a liter of soft drinks in the evening and roast chicken from the 24-hour shops of the capital.

They prefer hypermarkets where there can be wordless communication. And that’s how the citizens of Sofia recognize them – little boys with one-liter bottles of cars in their hands, say taxi drivers.

Those who have stayed in Bulgaria are those who have run out of money for smugglers or have been caught by the police. The fountains and lights in the evening in front of the National Palace of Culture, as well as the presence of many young and carefree people, especially impress the refugees. Some of them stop in front of the fountains and turn on the cameras on their phones, connecting with their relatives and acquaintances to show them live how nice it is in the Bulgarian capital.

Bulgaria is a country that they like very much, because it is calm, beautiful and has a doner for 1 euro. They can also find other halal food (allowed by the Muslim religion) because there are many Arabic and Turkish fast food restaurants. The problem for most of them is that they cannot find a suitable job in Bulgaria. There is no large Afghan community here to find support.

Only a few dozen Afghans live in the whole of Bulgaria, who have long since settled down, speak Bulgarian, have families and are practically invisible as a community. That is why young refugees cannot benefit from them.

Most of the migrants stay in Bulgaria until they find an opportunity to leave the country through traffickers and continue west.

Upon arrival, they register as refugees, but after submitting the documents before their registration is issued, they leave the country.

The options are different – there are already groups that go not only through Serbia but also to Romania to take the so-called northern route – through Poland to Germany and Scandinavia.

Many of these youths left quickly so as not to be recruited by the Taliban militia, and those who fled earlier did so so as not to be drafted into the Afghan army and sent to fight the Taliban. Abdul’s group is one of the lucky ones.

When they were caught, they had documents in them, so they were sent to one of the agency’s two camps in Sofia. They are located in the neighborhoods “Vrazhdebna” and “Voenna rampa”. There are also in the Ovcha Kupel district, but mothers with children are accommodated there. If they did not carry ID cards, the migrants would be sent to a police station in Busmantsi or near Harmanli. They are closed and refugees cannot leave until their identities are established. Only then are they moved to the agency’s homes. And while Abdul’s group still wants to reach France, Basser’s is happy to stay in Bulgaria. The 6 young people arrived less than a week ago and also paid 4,000 euros each.

but they gave it to us

“Then they will arrest us,” the man said. And he explains that he and his friends will try to acquire the status of permanent residents in our country, but they do not have money for lawyers. That is why they hope for non-governmental organizations. Men are ready to work in our country.

“I was a laboratory assistant. I worked in a blood lab, I think I’m good at my profession. “If they don’t let me stay, I can’t work.” And he explains that one of the boys in his company was a doctoral student in history. Another – assistant chef.

However, until they solve their residence problems, they will not be able to start work and this worries them.

“So far we are fine, we are fed in the camp, we have some money left,” said the company. As we speak, one of them breaks away, for

in front of the Museum of Sofia. He immediately sends the WhatsApp photo to his family.

“Our relatives gave us a lot of money so that we could leave. That’s why we show them that we are fine. We constantly ask them if the Taliban are harassing them, “they said. They are adamant that the Bulgarians are kind, hoping to stay in the country.

There are already 953 migrants accommodated in the homes of the Ministry of Interior until their identities are established. Only a week ago, they were 1,016, according to data from the Interior Ministry. They have already increased the capacity of the refugees they can accommodate, and from 1060 the number has jumped to 1260 in just 7 days.

Of all illegal migrants, 416, or 43.6%, are Afghans. 487 are the people from this country in the homes of the State Agency for Refugees. However, there is a significantly larger group of Syrians – 843. SAR homes are empty, according to data for the previous week – 1486 accommodated with a capacity of 5160 people. The reason why the capacity is only 28.8%, however, is the large number of people who left arbitrarily – only last week there were 256 people.

It is noticeable that there is a decrease in those caught at the entrance to the country – only 20 people per week. Curiously, half of them tried to enter our country across the border with Serbia. Migrants usually flee from there. The other 10 are caught in the act with Turkey.

Many more in the last 7 days have tried to escape from Bulgaria – 89 people. 230 are migrants caught in the interior of the country.

From the beginning of the year until August 23, a total of 745 people tried to enter the country illegally. The Afghans are the most numerous – 267. 1098 are the migrants who tried to continue to Western Europe. Again, most Afghans – 598. The most common route is through Serbia. In recent weeks, however, it has been noticed that refugees are trying to leave our country across the border with Romania. Such attempts were made by 168 of all migrants caught at the exit of the country.