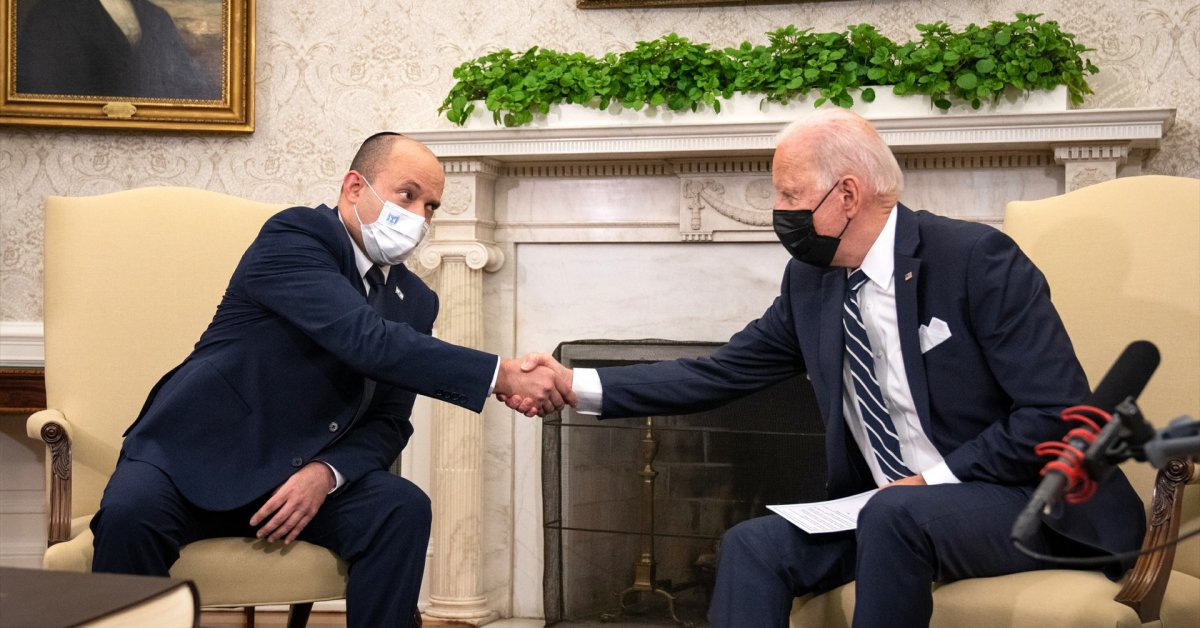 Due to the bombing in the Kabul airport area, this meeting between N. Bennett and J. Biden was postponed – it was to take place on Thursday.

The Israeli prime minister said he was bringing a “new spirit of cooperation” from Jerusalem. The 49-year-old politician took over the government in June after 12 years of former Israeli Prime Minister Benjamin Netanyahu, a close ally of Biden’s predecessor Donald Trump, ruled by polarization and, at times, hostility to U.S. Democrats.

But the meeting was overshadowed by an attack in Kabul that killed at least 85 people, including 13 American soldiers, in a bomb blast.

However, a meeting took place on Friday. An Israeli high-ranking official said Biden extended the meeting, which began in the Oval Cabinet, in a private presidential dining room “where the prime minister is treated to coffee.”

Bennett arrived on his first official foreign visit since taking over the Israeli government at the helm of an ideologically divided coalition in June. Bennett’s tough right-wing alliance Yamina has only a few seats in the Knesset.

“I will bring a new spirit from Israel, a spirit of people who sometimes have different opinions but work together,” he said in a meeting with Blinken on Wednesday.

“This is the same spirit I want to bring to our relationship of cooperation, goodwill and friendship,” the Israeli prime minister added.

There are disagreements between him and the White House on key issues.

Bennett has said he will continue to build settlements and opposes the creation of a Palestinian state in the territories occupied by Israel in 1967.

He also opposes the reopening of the U.S. consulate in Jerusalem, which has taken care of relations with the Palestinians. Trump closed the mission in 2019, relocating the U.S. embassy from Tel Aviv to Jerusalem, thus supporting Israel’s disputed claims to East Jerusalem.

Blinken hinted at those differences in his summary of Tuesday’s meeting. His office wrote that “the secretary also stressed that Israelis and Palestinians deserve equal measures of freedom, prosperity and dignity.”

Speaking to the media in the run-up to the visit to the US, Bennett said he would focus on Iran.

Israel is strongly opposed to Biden’s efforts to overturn Trump’s decision to withdraw from the 2015 powerful agreement with Iran over the Shiite republic’s nuclear program. Under the agreement, Tehran had to limit its nuclear program in exchange for easing sanctions on Iran.

Since 2018, when Trump announced it was withdrawing Washington from the agreement, Iran has begun to default on some important commitments, including those related to uranium enrichment.

After meeting with Bent on Wednesday, US Secretary of Defense Lloyd Austin did not talk about the agreement with Iran, but said he was concerned about “Iran’s worrying nuclear steps and continuing regional aggression.” He pledged “to ensure that Israel can defend itself against threats from Iran, its envoys and terrorist groups.”

“Netanyahu was convinced that he knew better than any president he had to deal with, what the United States should do,” Kurtzer said.

Under Mr Bennett’s leadership at the time, “even if there were – and certainly will be – policy disagreements [su J.Bidenu] will be able to speak without the spice of disrespect. “