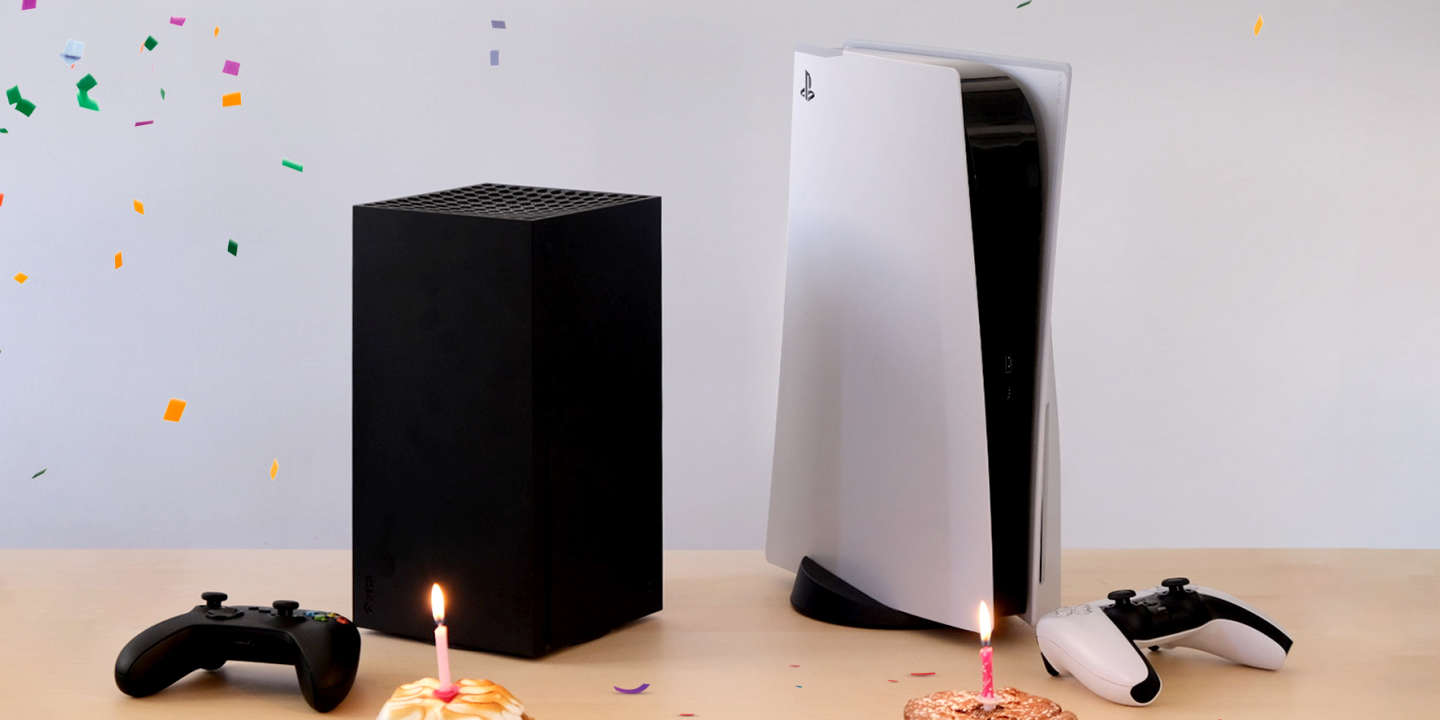 Happy birthday to the next generation consoles: the Xbox Series (X et S) de Microsoft and the Sony PlayStation 5 were released in France on November 10 and 19, 2020, respectively. What conclusions can be drawn from these past twelve months for the most powerful consoles from Microsoft and Sony?

The year of their release, marked by the Covid-19 pandemic, was atypical. All over the world, entire countries have been confined for several months. But, while the demand for home entertainment has never been greater, machines have experienced regular supply problems, due to the shortage of semiconductors, to the point of not being able to meet demand.

Without this Sony would undoubtedly have been able to announce a record sales volume for the PlayStation 5: with 13.4 million units distributed between November 2020 and October 2021, only matched the success of the PlayStation 4 over the twelve months after its own launch. Impossible to put these sales in perspective with those of the Xbox Series: Microsoft no longer communicates on the number of consoles sold since 2015.

Sales of consoles are not, however, the only indicator of their success: it is thus customary to say that the interest of a console is measured by that of its games. But, another shadow on the table for new generation consoles, since 2020, the development of certain games has also been troubled. Deferrals accumulate: the American site IGN has, for example, counted fifty-two in the current year.

However, it appears that, contrary to popular belief, this new generation is the one that had, the first year, the richest in terms of number of releases. This is indicated by our calculations, based on the site Metacritic.

The PlayStation 5 particularly stands out. And that’s without counting the many old games available identically on Xbox Series thanks to the “Game Pass” subscription: as these are not strictly speaking new releases, they do not appear here.

Figures inflated by a new phenomenon: the publication of “optimized” versions of games released on previous consoles, which they offer a simple graphic facelift, such as Gears 5 on Xbox Series, or take the opportunity to add new content, such as Ghost of Tsushima : Director’s Cut on PlayStation 5 – both count here.

The number of exclusive games, that is to say, according to our definition, released only on one of these platforms but not with its direct competitor, is, on the other hand, lower than ever. This is true for “manufacturer exclusives” (such as Forza Horizon 5, playable on all Microsoft consoles currently on the market) as well as for “console exclusives”, such as Returnal, Demon’s Souls Where Ratchet & Clank : Rift Apart, playable on a single medium, in this case the PlayStation 5.

Read also Teleworking, canceled shows, serial delays… The video game industry is still groping its way a year after the start of the pandemic

The games of the new generation have been the best received

” It was better before ! “, rehash the nostalgic. Our data, however, tends to show that the first games of the new console generation enjoyed better critical reception than those of the previous two generations. The Xbox Series X is particularly illustrated, where the catalog of the Xbox One, on the contrary, had rather disappointed.

Here again, we relied on data from Metacritic, whose scores out of 100 obtained by aggregating the reviews of the international press present numerous biases. To limit the scope, we preferred to the graduation out of 100 a simple classification in three categories, inspired by the three categories that Metacritic : we considered as “positive” the scores between 75 and 100, as “mixed” those between 50 and 74, and “negative” those below 50.

See also  Madara Cosmetics evaluates the results of the first half of the year as excellent :: Dienas Bizness

New versions of old games are multiplying. Of Demon’s Souls (a game from 2009 “remake” in 2020 on PlayStation 5) to recent GTA : Trilogy Definitive Edition (which brings together remasters of three parts of the series Grand Theft Auto released in the early 2000s), the resumption of successful titles on new consoles is a fundamental trend.

In that first year of the latest Microsoft and Sony consoles, nearly one in four “new games” was actually a remake, remaster, or port with additional content.

Bonus: What were the best (and worst) rated games in the year these consoles were launched?

We have decided, to limit the bias of Metacritic, to force us to compare catalogs rather than individual works. However, we did not resist the curiosity to know which were the games that had marked the launch of the last three generations of consoles, whether by their quality … or their emptiness.

A guilty pleasure to be found in this last painting.