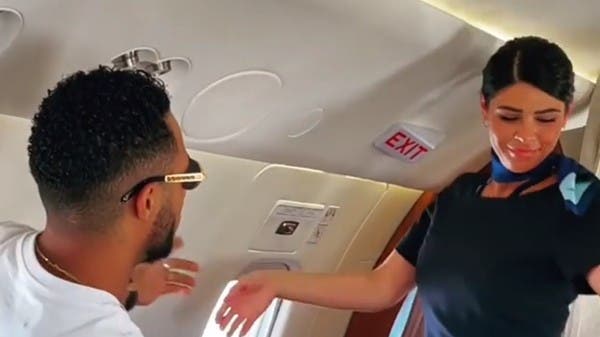 The Egyptian artist is back Mohamed Ramadan To grab the headlines and news as usual, but this time after the video in which he appeared dancing with two flight attendants on his private plane.

Following the uproar that the clip aroused, well-informed sources at the Ministry of Civil Aviation indicated to Al Arabiya.net that the ministry had no right to interfere or punish the two flight attendants, because the incident occurred on On board the artist’s private planeWhile the official regulations and legislation issued by the ministry are applied to the Egyptian crews belonging to national companies.

She explained that in the case of Ramadan, the hospitality staff is subject to the laws and regulations of their own company, even if it is in Egyptian airspace.

She stressed that the Egyptian authorities have no right to interfere in the accountability of the hostesses or their affiliated company, even if it is in violation of international regulations, in this case the company responsible for the hospitality staff is the one who has the right to hold them accountable or issue a penalty against them.

In a related context, Egyptian sources at the Ministry of Aviation pointed out to the media that the crew of the private plane that appeared in the video with Mohamed Ramadan is a German hospitality crew affiliated with a German company and not an Egyptian, explaining that it is the duty of the hospitality crew to serve and assist the passengers.

It is noteworthy that the Egyptian artist, Mohamed Ramadan, had posted on his accounts on social media, a video clip showing him dancing with two flight attendants on his private plane on his way to El Gouna, to the tunes of one of his famous songs, “Ya Habibi”.

While the video sparked widespread controversy, as the pioneers of social networking sites recalled the incident of the late pilot Ashraf Abu Al-Yusr with Muhammad Ramadan, which caused the pilot to stop his work for allowing a passenger to enter the cabin of the plane, and then his death after that.