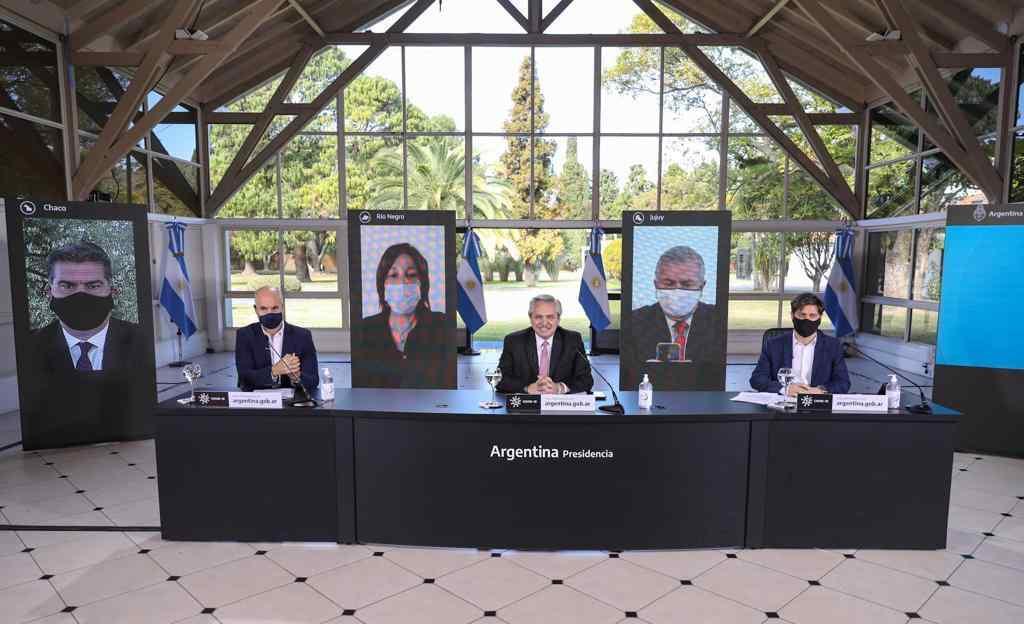 After dictating a tightening of the quarantine for three weeks in the Federal Capital and the Buenos Aires suburbs, where 15 of the country’s 45 million inhabitants live, Alberto Fernández announced this Friday that from Monday in this area of ​​the country and in others where There is also community transmission of the new coronavirus (some cities Chaco, Río Negro and Neuquén), it will go to a more flexible phase, with staggered openings.

ASPO, unlike DISPO (Social, Preventive and Mandatory Distance), means that nobody can leave their homes except to make purchases in the supermarket, the greengrocer or the kiosk, or that they are workers of essential and excepted activities.

The President announced that ASPO in these areas of the country will continue until Sunday, August 2, which means that in much of Argentina the quarantine will have lasted 136 days, probably the longest confinement in the world against the disease pandemic respiratory Covid-19.

The president justified the decision to keep ASPO for two more weeks and resume the gradual opening of activities, and breathe life into millions of people, based on epidemiological data.

As is his custom, he explained with films the numbers of infections and deaths from Covid-19, and he once again highlighted Argentina among the Latin American countries that the best health results were achieved in containing the pandemic thanks to the strategy faced by his government. .

However, the image of Fernández had been falling in the polls, to the din of the increasingly insistent and growing demands of different economic sectors and the opposition for the paralysis of the economy and the fatigue of people for being forced to remain in their homes for almost four months.

Friend’s Day, from a distance

The President made the announcement at the Olivos residence, accompanied by the head of the Buenos Aires Government, Horacio Rodríguez Larreta, and the Buenos Aires governor, Áxel Kicillof, who were joined by teleconference from their provinces, the governors of Chaco, Jorge Capitanich; from Río Negro, Arabela Carreras, and from Jujuy, Gerardo Morales.

“If we have to go back we will go back, and if we have to adjust more we will adjust more,” said Fernández, after noticing the health situation is still far from being overcome.

The head of state said that the average age of the deceased is 73 years, so he asked that people over 60 “continue to isolate themselves in their homes and continue to take care of themselves.”

He also asked citizens to take special care and respect social distancing measures before the celebration of Friend’s Day, on Monday 20.

“Those of us who love our friends so much, the best we can do is greet them from a distance,” he said.

Fernández affirmed that the health system was not saturated as a “consequence of care”, which must “be extreme to continue controlling the situation”, and asserted: “Isolation allows us not to fall into the crisis that other countries fell into, nor to choose who lives and who dies ”.

In the particular case of the Capital and the Buenos Aires metropolitan area, he stressed that “the isolation has allowed us to correct the contagion time”, but that it is still “very far from overcoming that problem”.

See also  Argentina: The death toll from confirmed coronavirus cases has risen to 136,118

He reported that 110 thousand cases have been registered in that area so far, with a bed occupancy that is 64 percent of its total capacity.

In the Federal Capital several economic and social activities and services will be progressively enabled in the coming days.

For example, physical activity will return individually. That is to say that, after three weeks of prohibition, people will be able to go for a walk, run and do physical exercise outdoors by DNI number from 6 in the afternoon to 10 in the morning.

Local businesses will reopen; Musical concerts will be allowed, with the physical gathering of the musicians but transmitted by streaming; The possibility of buying take-away food will be resumed, and activity will be resumed in schools, but only administrative activities, not classes.

In addition, shopping centers will be reactivated, except for those with high circulation and public transport will continue to be allowed only for workers with essential activities.

Children can also continue going out, accompanied by their parents, for one hour per day from 10 am to 6 pm, so as not to cross paths with the runners.

In addition, the religious temples will be reopened but only for individual prayer, with up to 10 people, and the ceremonies may be broadcast by streaming.

“The pandemic caused freedoms to be restricted around the world. With this plan we trust everyone’s responsibility to be able to recover those freedoms,” said Rodríguez Larreta.

See also  Flemish rectors argue for unity of command: “What we ...