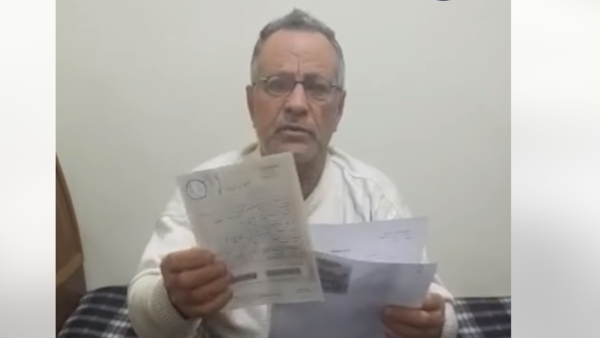 After Al-Arabiya.net published his story, the Egyptian Ministry of Interior revealed, on Tuesday, the circumstances of the harm of a citizen named Taha Imam Shafi’i Ghazala From the fact that he was registered in the official papers as “deceased”, and he was unable to obtain his identification papers.

In the details, the ministry clarified that “it was found that a notification was received to the Civil Status Sector on February 22, 2019 from the Port Said Health Office first of the death of the complainant himself.

By submitting to the Public Prosecution, it decided to seize and bring the reporter of the death, who is the specialized doctor and the health employee who recorded the data.

The accused were arrested and then it was found that on the same date that the complainant’s death was recorded, his mother died, and one of the complainant’s neighbors from his family helped him finish the procedures for the burial permit and handed him a photocopy of the complainant’s national number card, and the hospital reported the death to the health office staff to finish the procedures, so the matter got mixed up on the competent health employee By entering and recording the data in the office, where she erroneously established the incident of death in the name of the complainant, based on a copy of his ID card that was handed over to her among the papers, in addition to proving the name of a person who was present to report another death, as a reporter of the death being examined by mistake. .

Legal measures were taken to stop the death registration, and a national number (identity) card was issued to the complainant.

Find out while voting

The incident dates back to two years ago, when the 65-year-old man told Al Arabiya.net, saying that he went to vote in the House of Representatives elections in 2020, and there he discovered that he was not registered in the voter register, and when he surveyed the matter, he was surprised by the shocking news that His name is included in the records of the deceased, and a death certificate was issued to him from Port Said Governorate in the year 2019.