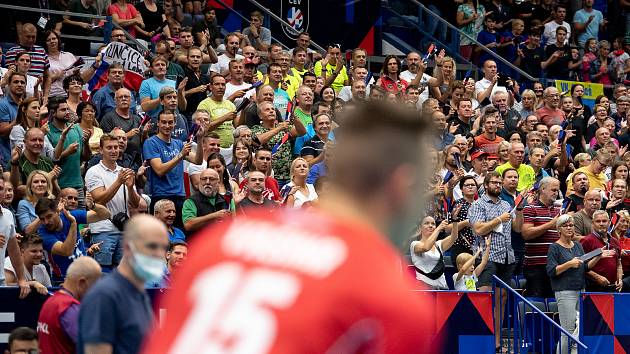 Thursday’s match with one of the candidates for the title, but the Czech team eventually lost 1: 3 (-20, -21, 23, -22). They will compete against other stars on Monday, their opponent in the round of 16 will be France, the Olympic winner from Tokyo.

In the last match of the basic group B, the Italians were only interested in prestige, the Czech Republic in improving their position in the table. That’s why they bit into the opponent like lions and played boldly.

“We got into it head on, so it has to be, it is not possible to play timidly against such opponents. We had to take risks, “remarked the universal Michal Finger, who spent two seasons on the Apennine Peninsula.

The gold cup is already in the hall. Olympic winners will also fly to Ostrava for him

Together with the 22-year-old blocker Josef Polák, they were Coach Novák’s secret weapon, which he drew on Italy. And both players did great – Finger played 23 points, Pole 11. “Great experience. As a kid, I was hoping to play in the Czech national team. And even against Italy, unbelievable, “the Pole revealed his feelings after the match.

The brave Czechs led over Italy in the 1st set. The last time was 10: 9, then Michieletto broke their resistance with his service. In the next act, his lead was up to the end (20:19), but the conclusion from the state of 21:21 arranged Pinali’s aces from the service.

See also  The people of Madrid manage their advance and run towards the title ... Barça can't do it ...

“The Italians had an excellent service, which bothered us a lot, but we helped each other with replacement blows,” said Universal Finger.

The Czechs only prevailed in the 3rd set, when in the end the pressure of the nervous Italians withstood. And in the fourth they demonstrated the impossible. Even though they lost by six points (12:18), their opponents were able to get within range of one (22:23). But the opponent managed the last two points more experienced.

The Czechs go to Italy and want to enjoy it. Hadrava has something to pay his opponents

“It simply came to our notice then. Unfortunately, it ended in a loss…, “regretted coach Jiří Novák. “Things that are not so visible are decisive, but they can turn the scales on our side. I’m glad that we didn’t pack the fourth set, but got into it again, and that we present ourselves with a fighting performance at the limit of our possibilities, “stated the Czech coach.

His team will also need courage on Monday, when he will play in the Ostravar Arena from 7 pm in the round of 16 against France – to the Olympic champion from Tokyo. Ten players will arrive from the golden cadre to the north of Moravia and Silesia.

Basic group B in Ostrava:

See also  Sensation: Rossi in FP1 at number 2 behind Viñales