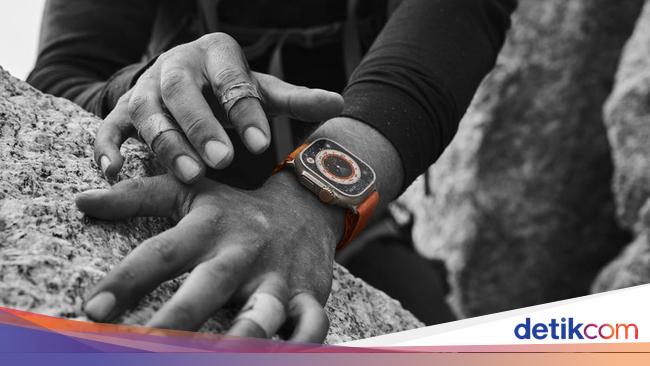 “Inspired by explorers and athletes from around the world, we created an entirely new category of Apple Watch designed for new and extreme environments – it’s the most powerful and capable Apple Watch ever,” said Jeff Williams, Apple’s Chief Operating Officer. “Apple Watch Ultra is a versatile tool that empowers users to push their limits with adventure, endurance, and exploration.”

Apple Watch Ultra has a body made differently to withstand extreme weather conditions. The case is made of aerospace titanium and the screen measures 49mm.

The screen is completely flat and made of sapphire crystal, which should increase its sturdiness. It still has the familiar crown but there are additional buttons to quickly access various features, such as including Workouts, Compass Waypoints, Backtrack, and more.

The buttons have been designed to be accessible even when wearing gloves. To optimize nighttime conditions, turning the Digital Crown turns the interface red for better visibility in the dark when using the Wayfinder watch face.

Apple Watch Ultra is equipped with multi-band GPS. As a result, it provides the most appropriate distance, speed and route data for training and competition.

The battery life can reach 36 hours. But there is a new battery optimization feature that can extend up to 60 hours of life.

Apple is equipping the Watch Ultra with three new bands. There is the Alpine Loop which is made with a two-layer nylon loop. There is an Ocean loop specially designed for extreme water sports and diving, and a lightweight Trail Loop.

The speakers on this smartwatch are promised to produce a louder sound. There’s also an improved microphone for windy situations.

The Watch Ultra is built to be WR-100 waterproof – and has an automatic built-in depth gauge. It is also EN13319 certified, which is the internationally recognized standard for diving accessories, including the depth gauge that recreational divers around the world rely on.

Apple Watch Ultra features the Depth app designed with an intuitive user interface. With just a glance, the Depth app displays the time, current depth, water temperature, duration under water, and the maximum depth reached. The user can program the Action button to directly launch the Depth application.

Not only that, this smartwatch is designed to help you explore the most extreme and remote locations, from the freezing cold mountains at -4° F (-20° C) to the scorching desert heat at 131° F (55° C). Apple Watch Ultra is MIL-STD-810H certified. Tests include Low Pressure (Altitude), High Temperature, Low Temperature, Temperature Shock, Contamination by Liquid, Rain, Humidity, Immersion, Sand and Dust, Freeze/Thaw, Hail/Freeze, Shock, Vibration and more .

Apple Watch Ultra can be purchased starting September 23. Prepare funds of USD 799 or around Rp. 11.9 million.