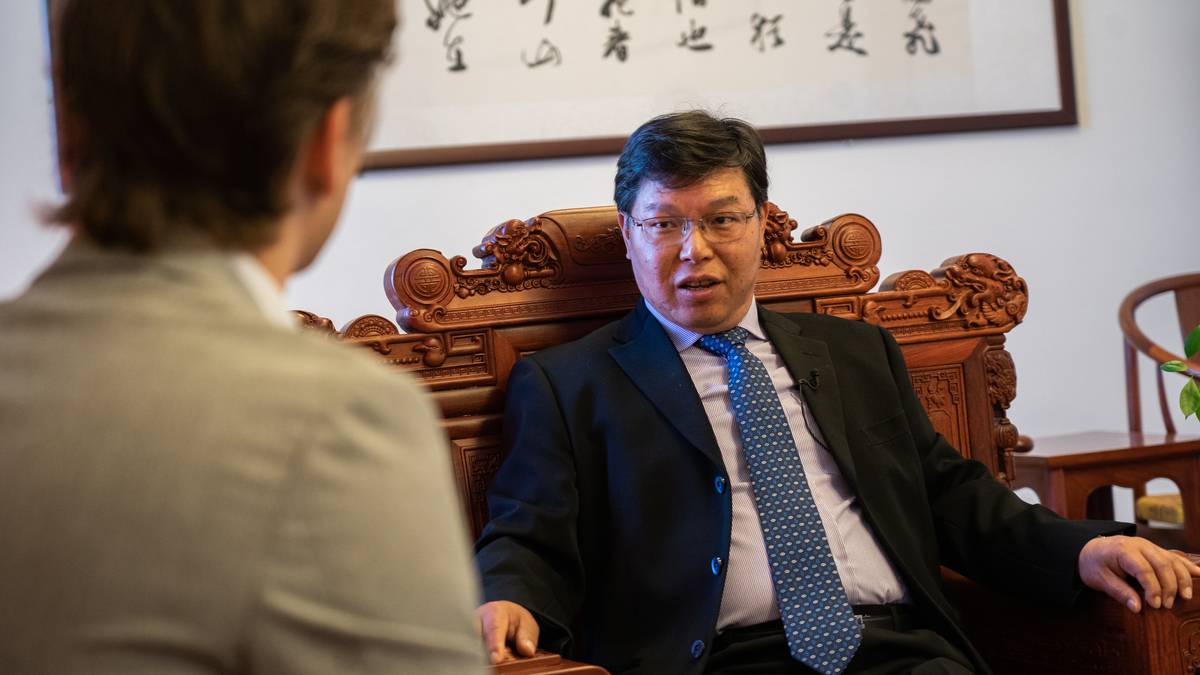 On Tuesday last week, an international crisis broke out around the island of Taiwan.

Until the start of this week, China thus held its largest ever military exercise around Taiwan.

Tensions are higher than in a long time, both in the Taiwan Strait and between China and the West.

At the same time, China’s ambassador to Norway Yi Xianliang says that he is grateful for the support the Norwegian government has given.

One-China policyis the principle that there is only one China and that Mainland China, Hong Kong, Macao and Taiwan together belong to itDepth.

” data-term=”One-China Policy”>One-China Policy, as well as the fact that Taiwan is part of China. We very much appreciate that Norway supports China’s territorial integrity and sovereignty, says Yi to NRK.

The Norwegian Ministry of Foreign Affairs would not comment on the matter on Friday. In an email to NRK earlier this week, State Secretary in the Foreign Ministry, Eivind Vad Petersson (Ap), writes that although the situation in the Taiwan Strait causes concern, it does not change Norway’s policy towards China:

– Norway’s “one China” policy is firm. Like most other countries, Norway does not recognize Taiwan as an independent state. President Biden also emphasized last week that the US’s “one China” policy is firm. We are concerned about the increased tension in the Taiwan Strait. Going forward, it will be important to prevent military activity that further increases the tension in the Taiwan Strait”.

At the same time, Ambassador Yi issues a warning to all Norwegian politicians who could be inspired by Pelosi.

– What would China do if a Norwegian parliament member or government member visited Taiwan?

– We would of course be against it. The Storting members belong to the government, they are politicians. We have nothing against cultural and economic ties with Taiwan. But it is serious if a politician touches this matter. That shouldn’t happen, says Yi.

– If we are forced into a corner, we have to react

Ambassador Yi says it should not surprise the world that China is holding major military exercises around Taiwan. He is also certain that there will be more such exercises if the US and Taiwan continue with “provocations”.

But it is not an easy decision. Increased tensions may also lead to a deeper desire for independence among Taiwanese.

– Maybe there are some who fear it. But it is a double-edged sword. If we had done nothing, those who want independence for Taiwan would also have been strengthened, the ambassador replies.

And it’s not just exercises that can be relevant:

– If we are forced into a corner – and you know what that means – then we will have to react.

– In other words, is China willing to go to war if, say, the US declares support for an independent Taiwan?

– The ball is in the USA’s court. Taiwan is a Chinese province. If what you say happens, 1.4 billion Chinese will stand against any risk. This is a fundamental interest of the nation. But I have faith that the United States will stand by its obligations. I have faith in that, says Yi.

– But if you invade Taiwan, wouldn’t the destruction and loss of human life outweigh the goal of reunification?

– In the last 20 years, the desire for “white supremacy” has returned in the West

More generally, Ambassador Yi says that Western countries are to blame for the deterioration of relations with China.

– I have traveled a lot and worked in the Ministry of Foreign Affairs for 30 years. I am convinced that people are good, but some politicians are not so good. The problem with Western countries is that they want to dominate the world. In the last 10-20 years, the desire for “white supremacy” has returned, he says.

Yi also believes that China has done nothing to worsen relations with the West and the US.

– We Chinese are 1.4 billion people. The fundamental challenge for the government is to meet the needs of this population. We have no additional resources to compete with other countries, says the ambassador.