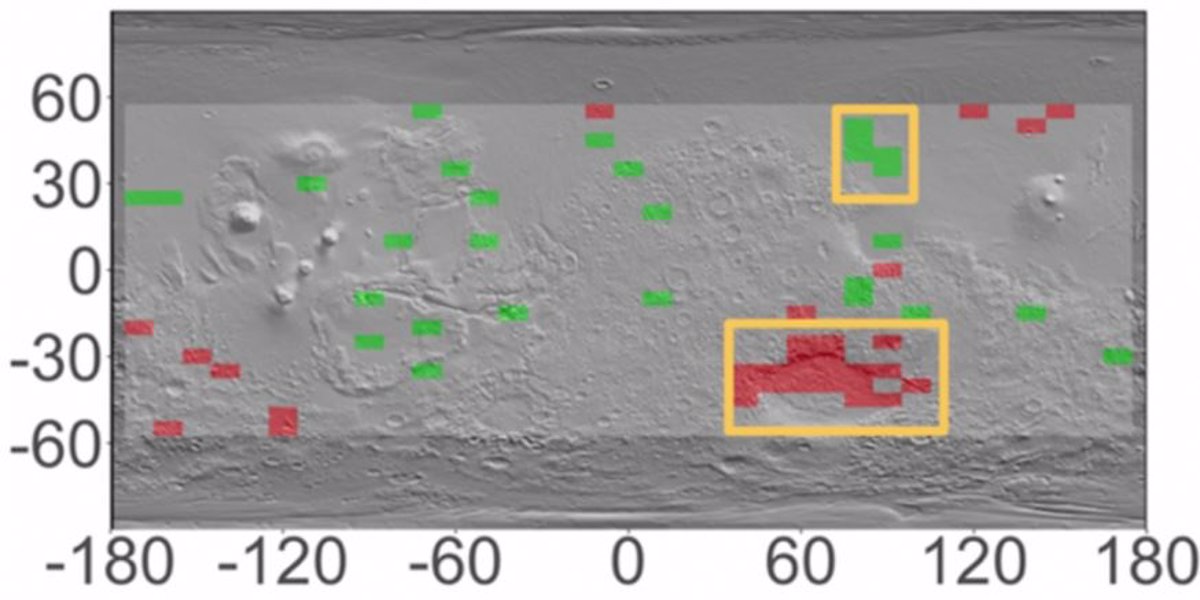 Seasonal variations of hydrogen have been used to identify probable underground deposits of water ice in temperate zones of Mars, where it would be easier to lay foundations.

Using data from NASA’s Mars Odyssey, which has spent nearly 20 years orbiting the Red Planet, Dr. Germán Martínez and his colleagues have identified two areas of particular interest: Hellas Planitia y Utopia Rupes, respectively in the southern and northern hemispheres. Seasonal variations in detected hydrogen levels suggest that significant amounts of water ice can be found a meter or so below the surface in these regions. The results were presented at the European Planetary Science Conference (EPSC) 2021.

Martínez, from the Lunar and Planetary Institute (LPI), says it’s a statement that “data from the Mars Odyssey neutron spectrometer showed signs of hydrogen below the surface of Mars from mid to equatorial latitudes, but we still had the challenge of figuring out if this is in the form of water ice, which can easily be used as resource, or enclosed in mineral salts or in grains and minerals of the soil. This is where seasonal variation provides an important clue.. As the colder soil temperatures occur at the same time as the largest observed increase in hydrogen content, it suggests that water ice is forming in the shallow subsurface of these regions during the fall and winter seasons. and then sublimates into gas during the warm season of each hemisphere. “

Shallow subsurface water ice has been found in abundance at the poles. However, freezing temperatures and low sunlight make the polar regions a hostile environment for human exploration. Areas from equatorial to mid latitudes are much more hospitable to both humans and robotic rovers, but Only deeper deposits of water ice have been detected to date, and these are difficult to reach.

To survive on Mars, astronauts would have to rely on resources already available on-site, as sending regular supplies across the 55 million kilometers between Earth and Mars at its closest point is not an option. Since liquid water is not available in the cold and arid environment of Mars, ice is a vital resource. The water will not only be essential for the sustenance of the life of the explorers or for the growth of plants and food, but also it could be broken down into oxygen and hydrogen for use as rocket fuel.

Two other regions are rich in hydrogen: Tharsis Montes and the Medusae Fossae Formation. However, these do not show seasonal variations and appear to be the least accessible forms of water.

“Definitely, those regions are also interesting for future missions,” Martinez added. “What we plan to do now for them, or Hellas Planitia and Utopia Rupes, is study their mineralogy with other instruments in hopes of detecting water-altered rock types. These areas would be ideal candidates for robotic missions, including sample returns. , since the ingredients for the rocket fuel would also be available there. “