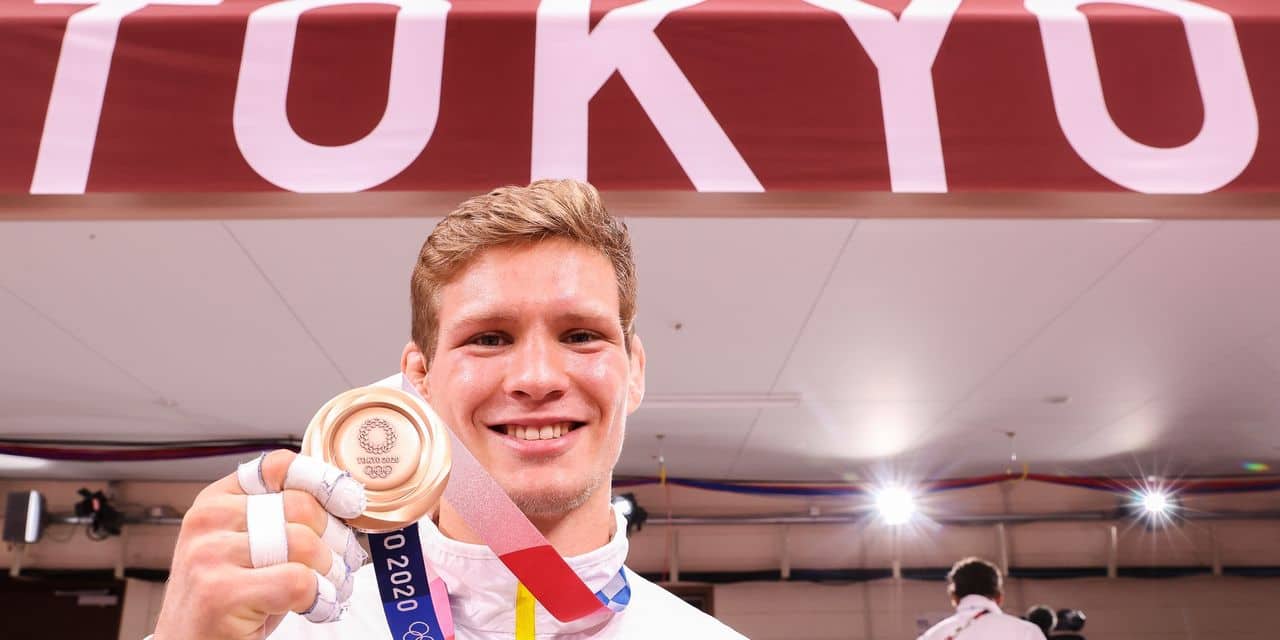 1. Michèle George, 47 years old, paralyzed in her left leg after being hit with a hoof in 2008, won two gold medals in equestrianism at the Tokyo Games, bringing her capital of Olympic medals to

2. The Royale Union Saint-Gilloise begins 2022 at the top of the Pro League championship standings. The Brussels club joined the elite at the end of the 2020-2021 season. After how many years of absence?

3. On August 8, 2021, at the Tokyo Olympics, Bashir Abdi offers Belgium a splendid bronze medal at the end of a fiery marathon. But his season does not end on this day. On October 24, he broke the European record in 2 hours 3 minutes and 36 seconds and won the marathon of

4. By winning the title of Belgian field hockey champion at the end of the 2020-2021 season, the Antwerp team of Dragons won its

5. Matthias Casse, 24, had a great year 2021, gleaning gold at the world judo championships in the under 81 kg category, silver at the European championships and bronze at the Olympic Games in Tokyo. The Mortselois has three brothers, all accomplished sportsmen. Jeroen is a judoka, like him. Robin and Vincent both practice

6. Taking into account the calendar year, which trio of top scorers in the Pro League?

7. The Belgian show jumping team present at the Tokyo Olympics, made up of Pieter Devos, Jérôme Guery and Gregory Wathelet, took a beautiful bronze medal. But Belgium signed another feat, also taking bronze (behind Switzerland and Germany) at the European Championships. Only one of the titled riders in Tokyo was part of the medalist quartet in Riesenbeck

8. At the Tokyo Paralympic Games, Liege Roger Habsch won two bronze medals, over 100 and 200 meters in a wheelchair. The day before the 100 meters, he experienced a mishap that could have deprived him of a medal.

9. At the Tokyo Olympic Games, what was the proportion of Belgian athletes supported by the Wallonia-Brussels Federation?

10. On October 3, an anthological Paris-Roubaix cyclist takes place, finally won in the sprint by the Italian Sonny Colbrelli in front of a Belgian rider and the Dutchman Mathieu Van der Poel. Which Belgian are we talking about?

11. In the qualifiers for the Women’s World Cup, the Belgian national team atomized, on 25 November, that of Armenia, with a historic score of 19-0. Who was the top scorer in this crazy match?

12. At the World Alpine Skiing Championships in Cortina d’Ampezzo (Italy), Norwegian Sebastian Foss-Solevag won the men’s slalom on February 21, 2021. A Belgian, Armand Marchant, took part in the event. It’s over

13. At the Tokyo Olympics, Nafissatou Thiam became the first Belgian athlete to retain her Olympic title, that of heptathlon. Thanks to his immense talent, his tenacity and an unparalleled competitive spirit. But also thanks to his trainer, himself a former athlete. It is

14. Who has just been crowned, in a poll organized by the DH and the Belgian Interfederal Olympic Committee, best sportsman of the year 2021

15. There is no question of ending this Belgian sports quiz without mentioning the extraordinary performance of the Red Lions, medalists at the Games. A little gift for the road. IF Vincent Vanasch did the job against Australia, during the shoot-out session, it was a field player who allowed Belgium to finish the final 1-1. In short, who was the Belgian striker that evening?