The head drives the legs. Even when air does not seem to enter the lungs, determination is an intangible that can affect more than fatigue. Nobody like Argentina is so conflicted in South America before going up to La Paz. The Bolivians themselves tell it, the statistics show it: the other selections run from the trauma of the undoubted effect that facing a similar demand causes on the body. Perhaps the best learning that this young team can take from the first victory achieved there in 15 years is this: if fear is left in the background, it can be competitive in such an adverse environment. And win, even after losing.

The balance of this first double opening day of the qualifiers closes perfect in the numbers and it ends better than it started if you just look at the football tour. You cannot remove the rival in the analysis, and it is seen that Bolivia is once again a candidate to be the worst team on the World Cup qualifying path. But Argentina, within the possible margin, managed to impose the highest hierarchy that it undoubtedly possesses. A piece of information, once again, on the value of being convinced: in the second half, when the legs weigh the most, the national team showed their dominance in the 10 shots they tried on goal, against just 3 of the local team. He had less of the ball, but controlled the game. Dosed the efforts as required by the chair, and got the definitive advantage in the good definition of Joaquín Correa.

The goal that gave Argentina the victory

The merit, in any case, was having corrected what had been done wrong against Ecuador, in the pale debut at the Bombonera, last Thursday. A little because of Acuña’s injury and another little, perhaps, by conviction, Scaloni made a background retouch, more than in form or name: the inclusion of Exequiel Palacios meant giving priority to the pass and control over vertigo and the round trip. The Bayer Leverkusen midfielder, a weakness of the coach, corresponded to the appointment with a complete game, almost without errors.

The numbers reflect the impact it had on the development of the game: Palacios led the virtuous statistics of the selection. He was the one who recovered the most balls (15), the one who gave the most passes to his teammates (49), the one who combined the most in the rival field (32) and the one who received the most fouls (5). Of course, on top of that, the 22-year-old just turned he was the most active to build partnerships and dare to break with monotony and lateral play. A start of his, after all, was the start of the tying goal maneuver. His ability to play defense and attack, little used in Germany because he is usually a substitute, was reflected again. It will be a valuable letter from now on.

Avoid centers. Cover the middle distance shots. Do not offer spaces between lines. The manual for a team on the plain to play so high above sea level has these three basic concepts in the defensive section. There’s no more. Whoever runs off that script will suffer. It took almost half an hour of the game in La Paz for the Argentine team to understand it. And it was, by far, the worst of his trip to such a height: the Hernando Siles stadium is at 3,577 meters, just a little below the city’s landmark: 3,640 meters marks the bibliography.

In that section, Bolivia pounded with the best it could do: climbs on the wings, openings and centers. The first, from the outset, discovered that this facet is the worst of Franco Armani: his bad start did not end in a goal because Martins’ header went wide. But Chumacero already found the free spaces behind Paredes to receive and Bolivia, a team without recognizable virtues, was approaching the goal. What did he achieve with that manual page that Argentina did not remember: another center and now a goal from Martins with a header.

That so much activated the alarm clock in the selection. It was the element that unlocked the fears, He deactivated the chains on his legs and gave rise to a new face. The national team already knew that there was a limited team in front (Farías, the coach, made six changes with respect to the defeat against Brazil, betting on including players who usually play in La Paz), but until he did not receive the hit of the goal, it seemed don’t take care of that. So yes, Ocampos’s individual arrests found company, Messi ran from the shadow that until then was, Lautaro Martínez had someone to chat with on the court and Palacios ordered the game. 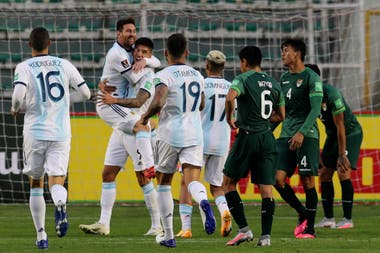 The second time, with Argentina in command, it went from lowest to highest. Already Messi, limited in his starts to take care of the air, participated in almost all the plays and did not lose the ball, while the threatening Lautaro began to prowl the goal. He did not find it after a great pass from 10 and a shot that Lampe deflected, but the next association between the captain and the striker – who had barely combined against Ecuador – came Joaquín Correa’s goal, effective to resolve with one touch. And they could be more, even.

But it was not necessary: ​​in the end, the selection reaped a victory that is worth three points but much more for the lesson. If soccer is a contagious game, it will always be good to continue trusting those who perform it best. Those must be followed. And, above all, understand that external difficulties are faced with a strong head. So that the feet dance. 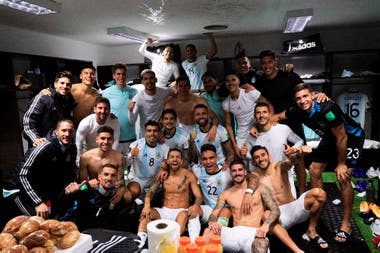 The photo of the dressing room, after the victory: the team added six starting points in the qualifying rounds. Credit: @ Notamendi30