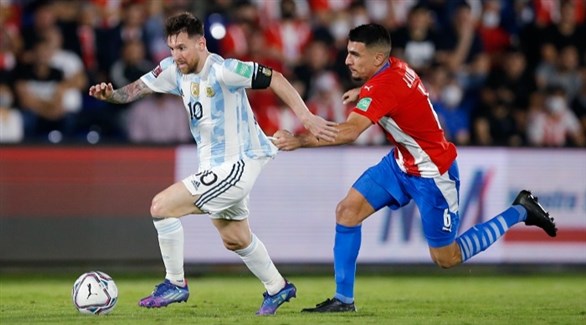 Argentina failed to score for the first time since June 2019, but a 0-0 draw with its host Paraguay preserved its unbeaten record in the South American qualifiers for the 2022 FIFA World Cup.

The Argentine national team played 23 matches unbeaten under the leadership of coach Lionel Scaloni, and is ranked second in the qualifiers behind Brazil, which defeated Venezuela 3-1.

The top four teams automatically qualify for next year’s Qatar finals, while the fifth-placed team plays a playoff against a team from another continent.

Argentina played without striker Lautaro Martinez, and Lionel Messi played an unusually calm match, and the confrontation lacked excitement, especially in the first half.

The visitors had the most dangerous opportunities, but the Paraguay team entered the atmosphere of the match in the second half and tested Argentine goalkeeper Emiliano Martinez more than once.

Scaloni made five changes in the second half and the match became even more exciting.

Paraguay goalkeeper Anthony Silva made a superb save from substitute Alejandro Gomez 12 minutes before the end and on the other side Carlos Gonzalez knocked the ball over the bar with three minutes remaining.

Argentina will meet in its next match with Uruguay (10 October) and Peru (14 October) at home, while Paraguay plays abroad against Chile on Sunday and Bolivia on Thursday.