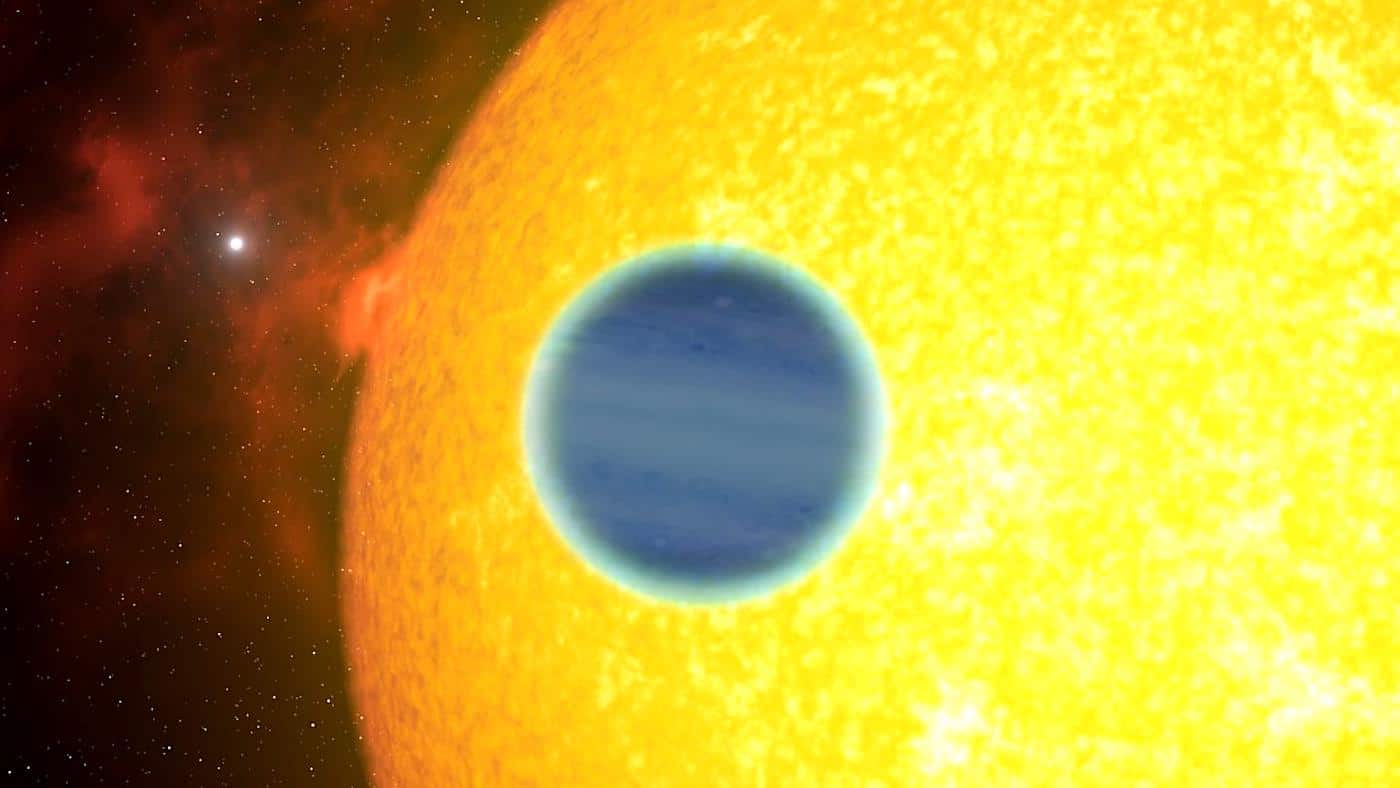 The distant exoplanet WASP-127b is of great interest to researchers because of its unusual characteristics, including a hypothetical thick cloud layer. Recently, an international team of astronomers was able to confirm the presence of these clouds on the exoplanet, then managed to measure their altitude with unprecedented precision.

By combining data from a space telescope and a terrestrial telescope, the team was able to reveal the upper structure of the planet’s atmosphere. This paves the way for similar studies in many other distant worlds. The study was presented at the Europlanet 2021 Scientific Congress by Dr Romain Allart.

WASP-127b, located more than 525 light years, is a “hot Saturn” – a giant planet of mass similar to Saturn that orbits very close to its star. The team watched the planet walk past its host star in order to detect patterns that embed in the star’s light as it is filtered by the planet’s atmosphere and altered by its chemical constituents.

By combining infrared observations from the ESA / NASA Hubble Space Telescope (HST) and visible light measurements from the ESPRESSO spectrograph at the Very Large Telescope at the European Southern Observatory in Chile, the researchers were able to survey different regions of the atmosphere. And the results brought some surprises. The SPectrograph for Rocky Exoplanets and Stable Spectroscopic Observations (ESPRESSO) Scale is the world’s most accurate spectrograph for radial velocity measurements, a method of detecting exoplanets.

First of all, as has already been seen for this type of planet, astronomers detected the presence of sodium, but at a much lower altitude than they expected. Second, there were strong water vapor signals in the infrared, but none in the visible wavelengths.

« This implies that water vapor at lower levels is filtered by clouds that are opaque at visible wavelengths, but transparent in the infrared. Said Allart, of iREx / University of Montreal and University of Geneva, who led the study. The combined data from the two instruments allowed the researchers to reduce the altitude of the clouds to an atmospheric layer with a pressure between 0.3 and 0.5 millibar.

« We do not yet know the composition of clouds, except that they are not composed of water droplets like on Earth. Said Allart. ” We are also puzzled as to why sodium is found in an unexpected place on this planet. Future studies will help us better understand not only the atmospheric structure, but also WASP-127b, which turns out to be a fascinating place. ».

WASP-127b, a planet of growing interest

With a full orbit around its star occurring in about four days, WASP-127b receives 600 times more irradiation than Earth and experiences temperatures of up to 1,100 degrees Celsius. This “inflates” the planet to a radius 1.3 times the radius of Jupiter, with only a fifth of its mass, making it one of the least dense or “fluffy” exoplanets ever discovered. .

The extended nature of “fluffy” exoplanets makes them easier to observe, and WASP-127b is therefore an ideal candidate for researchers working on the characterization of the atmosphere. The team’s observations with the ESPRESSO instrument also suggest that, unlike the planets in our solar system, WASP-127b orbit not only in the direction opposite to that of its star, but also in a plane different from the equatorial plane.

« Such an alignment is unexpected for a hot Saturn in an old star system, and could be caused by an unknown companion Said Allart. All of these unique characteristics make WASP-127b a planet that will likely be much studied in the future.

A new method for detecting water vapor on distant exoplanets

« We propose a new framework for researching water vapor and other molecular species at high resolution. Despite the good quality of the data, we did not detect any water vapor. However, we combined this result with a low resolution detection of water at 1.3 microns to constrain the presence of clouds in the atmosphere of WASP-127b. », Write the researchers.

According to the researchers, their study shows for the first time that high-resolution visible data can be used to differentiate cloudy and non-cloudy exoplanets by measuring water content, and can also provide essential information on cloud layer pressure. . ” The framework developed here to measure this water content will be applied to other exoplanets in the ESPRESSO GTO atmospheric survey and other surveys, such as the NIRPS GTO atmospheric survey. », They add.