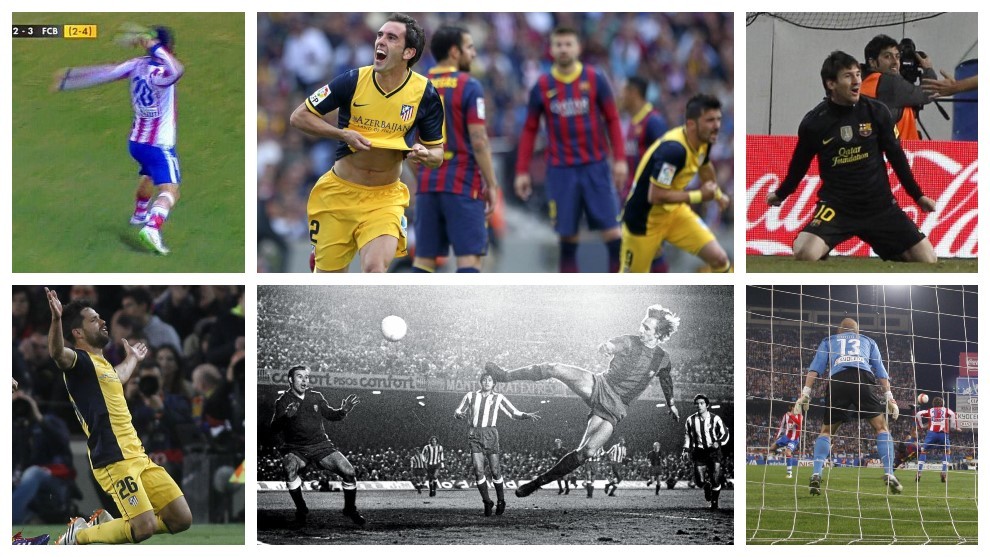 Atletico Madrid host Barcelona this Saturday night in a game that is sure to deliver. It’s a fixture that is filled with history and we’ve looked back at some of the most memorable moments from past meetings between the two.

On February 26, 2016, at the Estadio Vicente Calderon, Barcelona visited Atletico needing a win. It was a tense game with 13 yellow cards in all. Dani Alves opened the scoring, Radamel Falcao levelled and then Lionel Messi produced brilliance.

With a freekick from an unlikely angle, the genius caught Thibaut Courtois – and everyone else – of guard by taking it quickly to seal a 2-1 win.

On May 17, 2014, Atletico made the trip to the Camp Nou, knowing one point would win them the title. Alexis Sanchez put Barcelona into the driving seat, but a Gabi corner was headed home by Diego Godin after the break for the equaliser and title-winning goal.

On March 1, 2008, Frank Rijkaard’s side visited the Calderon already showing signs of decline. But, on the half hour mark Xavi put a ball in to Ronaldinho, who produced a spectacular overhead kick to open the scoring in a game that ended 4-2.

It was August 25, 1996, and Ronaldo had just arrived at Barcelona under Bobby Robson. At 3-2, the Brazilian showed his sublime dribbling skills to cut Atleti apart before teeing up Ivan de la Pena to make it 4-2.

That same year, on April 20, Radomir Antic’s Atleti were en route to the title, but they had to overcome Barcelona first. In the 10th minute, Caminero was under pressure from Nadal, but a clever feint bought him space to assist the opening goal in a 3-1 win for Los Rojiblancos.

By December 22, 1973, Cruyff had been at Barcelona for long enough to revolutionise the atmosphere at the club, but Atletico’s visit was a test. In the 43rd minute, the Dutchman produced a moment of magic to amaze the Camp Nou and open the scoring in a 2-1 win, with Barcelona going on to win the title.

On January 29, 2015, in a Copa del Rey quarter-final, Arda Turan’s temper boiled over. With Gabi already sent off, the Turk lost his cool and threw his boot at the linesman. Already booked, Arda wasn’t punished, neither on the day nor by the competition committee.

It was March 12, 1997, in another Copa del Rey quarter-final. The first leg had ended 2-2, and a Pantic hat-trick saw Atletico leading 3-0 at the Camp Nou. Barcelona scored two, but then a penalty made it 4-2 before an incredible comeback clinched a huge win for Barcelona.

On April 1, 2014, in a Champions League quarter-final, Diego Simeone’s system was frustrating the Catalans. In the 56th minute, Diego Ribas, who had replaced Diego Costa, launched a missile from 30 metres that found its way into the net. In the end, Atleti knocked out the Blaugrana.

In 1998, on May 10, the two met at the Calderon in the league. Barcelona fans were treated to a glorious moment as Rivaldo scored a fine goal from his own half. Atleti came back to win 5-2, though.

On April 24, 2000, Barcelona hosted Atleti in the second leg of their Copa del Rey semi-final, having lost 3-0 at the Calderon.

What happened was one of the strangest moments in the fixture’s history. The game coincided with a Dutch national team game and Barcelona claimed they didn’t have enough players to play the game, though the Spanish football federation didn’t agree and the game went ahead.

Barcelona arrived at the stadium, but, with the exception of captain Pep Guardiola, nobody took to the field. Barcelona were handed a loss and suspended from the competition for a year, although that suspension was later overturned.