When humans first arrived in what is now Queensland, Australia, they would have discovered land inhabited by massive animals, including 6-meter-long monitor lizards and twice as large kangaroos. than a human.

The scientists who brought to light these discoveries have studied fossil bones of these animals over the past decade and can now provide some answers to the mystery of what led these ancient megafauna to extinction.

The first bones were found by the Barada Barna people during cultural heritage surveys on their traditional lands about 100 kilometers west of Mackay, in the South Walker Creek mine (which is an open-pit coal mine ), in Australia.

The researchers’ discoveries share the very first reliable glimpse of the giant creatures that roamed Australia 40,000 to 60,000 years ago. It was then a veritable megafauna, in which the largest land animals in Australia had lived since the time of the dinosaurs. Understanding the ecological role they played, as well as the environmental impact of their loss remains, according to the researchers, ” their most precious story. “ 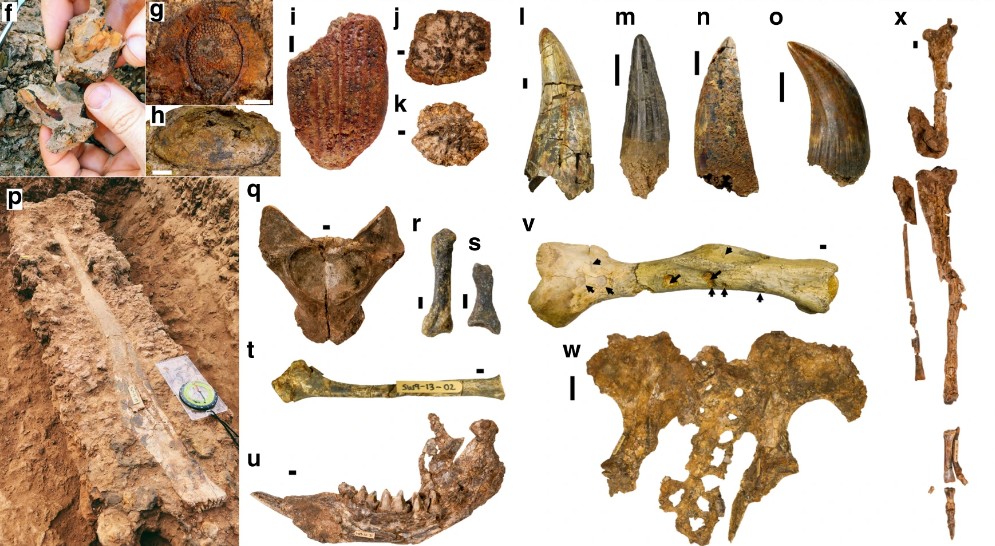 While this megafauna lived in South Walker Creek, humans arrived on the mainland and spread across the land.

Discovery of a megafauna

Researchers discovered fossils at four different sites and carried out detailed studies of the sites themselves, with the aim of finding the age of the fossils and understanding what the environment of the areas looked like in the past.

So far, researchers have discovered at least 13 extirpated species at South Walker Creek, including megareptiles as super predators (or apex predators; predators that, once in adulthood, are at the top of the food chain and are not the prey of any other animal species) and mega-mammals as prey. 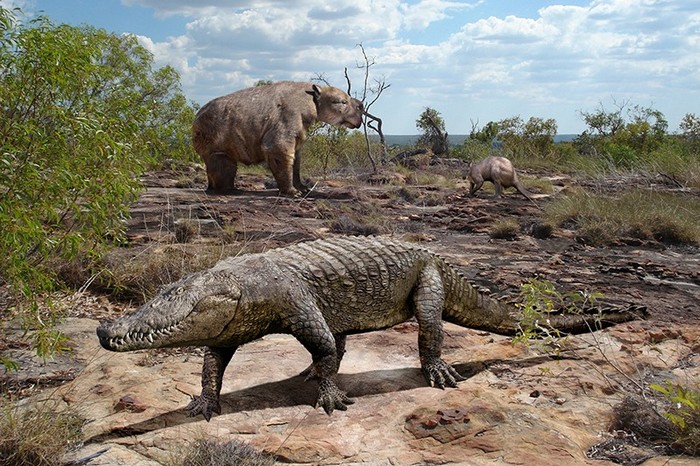 According to the researchers, many of the species discovered are most certainly new species, or northern variants of their southern counterparts.

Various animals, like some crocodiles, have disappeared a long time ago (long before humans arrived at these places). However, we now know that they survived in at least one place 60,000 to 40,000 years ago.

For the first humans in this area, it must have been surprising to see. Imagine coming face to face with a 6-meter monitor lizard, or even with a huge terrestrial crocodile. And the mammals were just as strange, including giant black-toothed wombats, strange marsupials and huge kangaroos.

Indeed, a gigantic kangaroo has been discovered (the latter has yet to be named) and it is the largest kangaroo ever found. With a mass estimated at 274 kilograms, it beats the previous competitor, the Procoptodon goliah, which measured 2.7 meters and weighed about 240 kg. 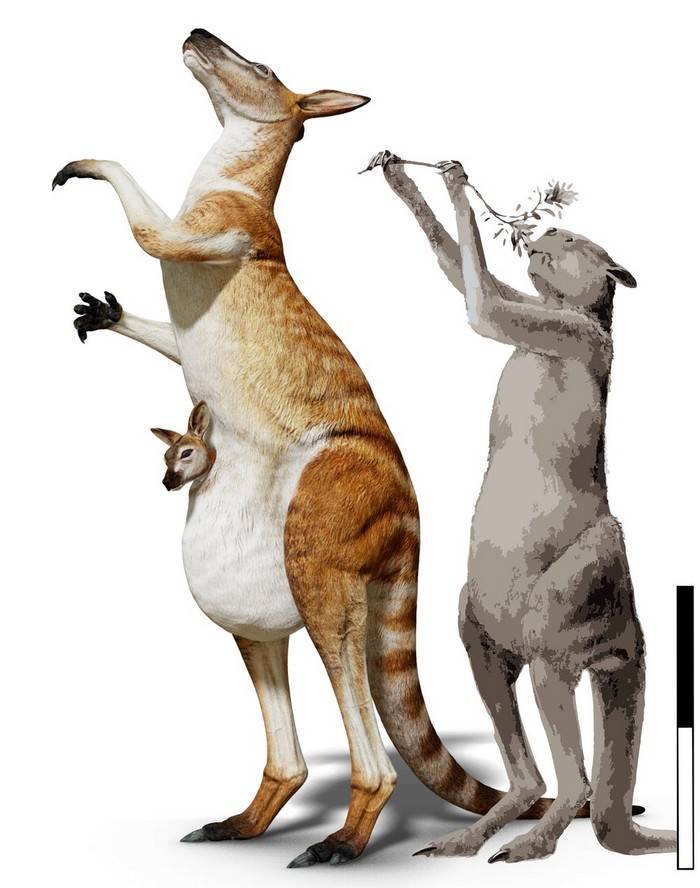 The South Walker Creek giant kangaroo is perhaps the largest kangaroo ever discovered. In the image, the latter is next to the previous title holder, Procoptodon goliah. The scale bar is one meter. Credits: V. Konstantinov / A. Atuchin / R. Allen / S. Hocknull / Queensland Museum

At that time, the largest of all mammals was the marsupial Diprotodon three tonnes. The deadliest of them was the predator Thylacoleo. Alongside these giants, other species of megafauna still survive today: theemu, the red kangaroo and the marine crocodile.

But then, why did these megafauna disappear?

Some scientists speculate that the extinctions were caused by over-hunting by humans, and occurred shortly after humans arrived in Australia.

However, this theory is not supported by the research team, which, by its discoveries, can conclude that a number of ancient giant species still survived 40,000 years ago, that is, after humans have spread across the continent.

Indeed, the extinctions of these tropical megafauna occurred some time after the formation of the youngest fossil discovered by researchers, 40,000 years ago.

The timing of their disappearance coincides with sustained regional changes in water and vegetation, as well as an increase in the frequency of fires. This combination of factors can prove fatal for giant terrestrial and aquatic species.

You may also like: In just 40 years, the world’s freshwater megafauna has declined by 88%

With an overlap between humans and the megafauna spanning a period of about 15,000 to 20,000 years, new questions arise about cohabitation: how did people live with these giant animals (and predators) during a time of such radical environmental change?

What other additional changes can Australia support?

Major environmental changes and extinctions are not an unusual part of our geological past. However, this time, it concerns us also. Indeed, throughout the Pleistocene (the period that ended with the last ice age), Australia has undergone major climatic and environmental changes.

In the same watershed of these new megafauna sites, a study shows how the major climatic upheavals that began around 280,000 years ago have caused the disappearance of a diverse fauna from the tropical forests. This triggered a sequence of ecosystem changes that led to the loss of the megafauna at South Walker Creek about 40,000 years ago. As of today, we still do not know what impact these long-term environmental changes and the loss of megafauna have had on the surviving species.

This long-term trend of extinctions has now been accelerated by the major changes in the human-made environment that continue today. In Australia, at the start of the 21st century, there was an increase in floods, droughts and bush fires, and researchers predict that these increases will continue in the decades to come. 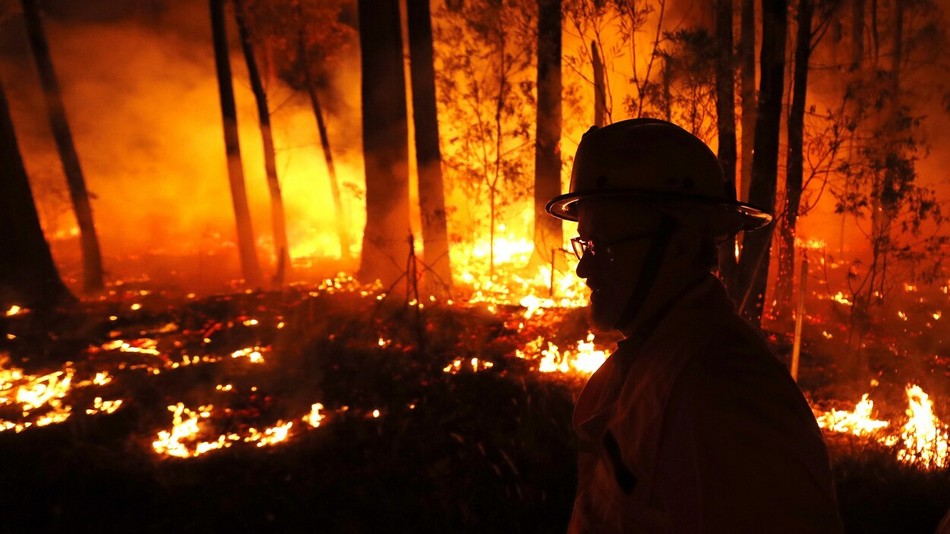 Fossils, these windows on our past

The fossil record provides us with a window into our past that can help us understand our present. As the study shows, dramatic environmental changes are weighing heavily on the survival of species, especially for those at the top of the food chain.

So we can ask ourselves: will we heed warnings of the past, or suffer the consequences?

The rigged elections will maintain the dictatorship and impunity in Bolivia

Elections in Bolivia (EFE) Ten months after the resignation of Evo Morales, the dictatorship in Bolivia is intact and...
Read more

Gáldar puts out to tender the works of the new institute

Life before COVID-19 will not return until 2022, even with the first vaccines

By: Paul PadillaPhoto via: Twitter @MillosFCOficial At the age of 43, former soccer player Ricardo Ciciliano died after having relapsed...
Read more

https://www.youtube.com/watch?v=xWJLZdxZMcw The Tavern of Meristation returns for the fourth season...
Read more
Technology