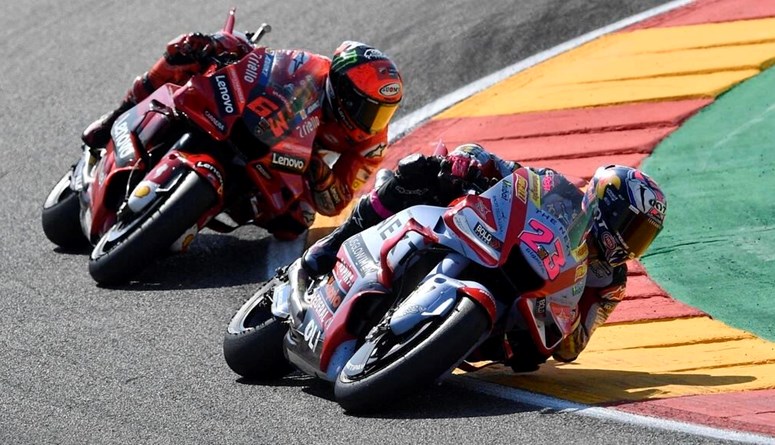 Italy’s Inia Bastianini (Ducati-Grezzini) won the Aragonese Grand Prix, round 15 of the MotoGP World Championship, after he succeeded in overtaking his compatriot Francesco Bagnaia (Ducati) in the last lap, while the most prominent losers were the title holders. Frenchman Fabio Quartarao (Yamaha), as he came out empty-handed due to his withdrawal from the first lap.

Bastianini, who finished the race with a time of 41:35.462 minutes, deprived the factory Ducati rider in pole position and second in the standings for Banaya riders of a fifth win in a row, by 0.042 seconds, while Spaniard Alex Espargaro (Aprilia) finished third by 6.139 seconds.

Ducati was crowned the constructors’ champion thanks to the Bastianini and Banyana double to retain his title, with five races remaining.

“The race was great for me from the start,” said Bastianini, fourth overall with 163 points. “I made some mistakes during the race, but in the end I managed to win, it’s like a dream.”

The two Italian riders fought a fierce battle for first place, while Bastianini overtook his future Ducati teammate next season on the last lap of the race.

Banaya explained what happened to him at the end of the race: “I didn’t think I could pass Enya again because I had taken a lot of risks in the previous laps.”

Although he was satisfied with the second place, Banaya, who comes from Turin, came out with a sufficient mule of points (20) and is no longer only 10 behind the leader Quartararo (211 to 201), who withdrew after a collision with Spaniard Marc Marquez (Honda), knowing that the fate of The latter, the six-time world champion in the Queen category, was similar to the title holder, as after a few seconds his Japanese colleague Takaki Nakagami collided with him, causing damage to his bike to announce his withdrawal.

Quartararo, who started from sixth place, fell on the first lap of the race after colliding from behind with Marquez’s bike, returning to Moto G after three months (112 days) due to an arm operation.

Marquez’s knot continued in his country’s race at the Spanish Aragon circuit, where he did not succeed during his career to climb to the podium.

The Frenchman, who did not suffer a strong injury, but only minor burns, commented on what happened to him, saying: “Things are good. I still feel pain and some burns, but this is what happens. For once we had a rhythm to compete in order to achieve a good result, but unfortunately we did not We can do that.”

The Yamaha rider added: “I don’t remember the accident very well, and I think a lot of the riders made mistakes… Marc (Marquez) turned around and slipped and hit the back of his bike. I stopped too early.”

The riders and technicians observed a minute’s silence before the start of the race in honor of Britain’s Queen Elizabeth II, who died last Thursday.

Here are the top five rankings for the Aragonese Grand Prix:

3- Spain’s Alex Espargaro (Aprilia) with a difference of 6.139 seconds.

5- Australian Jack Miller (Ducati) with a difference of 6.964 seconds.

The top five rankings in the World Championships: