Before Kamala Harris made history, there was Charlotta Bass

As a candidate for the nation’s second-highest office under the Progressive Party ticket in 1952, she addressed convention attendees on March 30 that year.

“I stand before you with great pride,” she said. “This is a historic moment in American political life. Historic for myself, for my people, for all women. For the first time in the history of this nation a political party has chosen a Negro woman for the second highest office in the land.”
In a nod to her minimal chances of winning, her campaign slogan was, “Win or lose, we win by raising the issues.” Her party lost to Republican Dwight D. Eisenhower, but her campaign decades ago helped open doors for minority candidates today, according to experts.

“Bass certainly paved the way for the Kamalas of today, in terms of both her identity and her politics of coalition-building,” said Keisha N. Blain, associate professor of history at the University of Pittsburgh and author of “Set the World on Fire: Black Nationalist Women and the Global Struggle for Freedom.”

“But it is equally important to talk about the countless Black women whose labor has formed the backbone of the Democratic Party.” 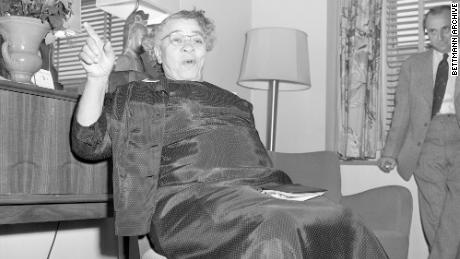 Bass made history before she ran for VP

Bass started making history long before she ran for office. The activist turned politician was born in South Carolina in 1874. She later moved to the West Coast, where she became one of the first African American women to own and operate a newspaper — the California Eagle.

Her fight against injustice started decades before her political bid. She used her newspaper as a platform to highlight issues such as police brutality, restrictive housing, the Ku Klax Klan and civil liberties.

She was such a major advocate for civil liberties, women’s rights and immigration, she received death threats. The FBI also placed her under surveillance after she was labeled a communist, government records show.

When Bass’ husband died in 1934, she ramped up her activism by joining groups fighting against injustices. She also founded the National Sojourner for Truth and Justice Club, which worked to improve working conditions for Black women.

“Throughout her career, Bass evolved and worked with various political groups, capturing the richness and complexity of Black politics,” Blain said.

She served as president of a chapter of the Universal Negro Improvement Association, engaged with the more moderate NAACP, and was a leader among leftists and communists in the Sojourners for Truth and Justice, she added.

“Bass’s ability to move within radical and more mainstream circles — and her ability to draw significant insight from each — is an important lesson for Harris as she strives to craft a successful political coalition with Biden,” Blain said.

While Bass was a key figure in politics, Blain said, equally important are Charlene Mitchell, Shirley Chisholm and countless of other Black women who’ve worked — oftentimes behind the scenes — to make minorities in politics mainstream. 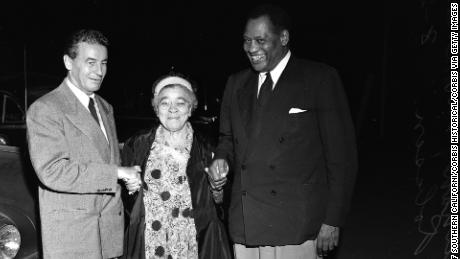 “Mitchell ran for president on the Communist Party ticket in 1968, and Chisholm campaigned in the 1972 Democratic presidential primary. These women paved the way for Harris and other Black women in presidential politics,” she said.

The Progressive Party candidate for president was Vincent Hallinan, an attorney who ran for office from behind bars after he was jailed for six months on contempt charges.
Denise Lynn, a history professor at University of Southern Indiana, said that the Progressive Party was opposed to the United States serving as a global police force, especially in former colonies where the majority of people were not White.
“The Progressive Party ran … on a platform that opposed militarism, war, and political contest with the Soviet Union in favor of social justice, economic equality and peace. Bass was instrumental in getting the Progressive Party on the ballot in California,” Lynn wrote in a piece published this year.

The Private Hospital of the South...
Read more
Health

Call of Duty Modern Warfare Server Down: is Battle Royale Warzone to blame?