File photo. Acting President of Bolivia, Jeanine Añez, during a ceremony for the 195 years of independence of the country, in La Paz, Bolivia. Aug 6, 2020. REUTERS / David Mercado

The interim president of Bolivia, Jeanine Áñez, assured the United Nations General Assembly that Latin America is facing a “bifurcation” that can lead the region down one of two paths: that of oppression or that of freedom.; indicated that despite attempts at “selfish power seizures” it has led the Andean country “on the path of freedom” and He emphatically denounced the Argentine government for having welcomed former President Evo Morales, something that he said represents a “systematic and abusive harassment against republican values ​​in the country”.

In a speech recorded and screened at the UN compound in New York, Áñez said that “many societies run the risk of falling to new forms of authoritarianism”. In clear reference to the MAS, although without naming it, the interim president assured that the objective of “These groups seek to seize the culture, the economy and, ultimately, the freedoms of the people”.

However, he assured, his administration is “leading Bolivia on the path of freedom after more than a decade of authoritarianism and dictatorship.” And he said that this is illustrated in the organization of the presidential elections that will take place on 18 October “despite attempts to prevent it a few weeks ago”.

Áñez was referring to the blockades carried out by organizations related to the MAS, which asked that the elections be held on September 6, the original date that was later postponed by the Covid-19 pandemic. “They blocked the passage of oxygen for people who had Covid-19. It led to deaths and suffering, ”he added. The blockades were finally lifted and Bolivians will go to the polls on October 18.

During her speech, the interim president defended the health management of her administration with respect to the pandemic, highlighting the direct transfers to citizens and “the decision to invest 10 percent of the budget in health.” 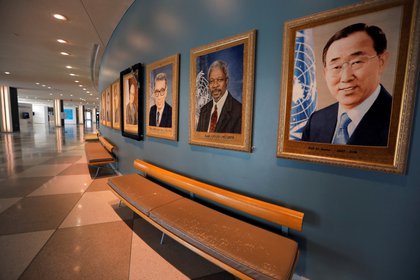 The United Nations building, empty during the General Assembly due to the Covid-19 pandemic. Photo: REUTERS / Mike Segar

By the end of his speech, he returned to the political arena with an energetic denunciation of the Argentine government for hosting Morales, who arrived in the country after going into exile after weeks of violence catalyzed by the frustrated electoral process of October 2019.

“We denounce before the world the systematic and abusive harassment that the Kirchnerist government exercises from Argentina against the institutions and against the republican values ​​in Bolivia. We have nothing against the noble Argentine people. Furthermore, it is a nation that we value and love a brother like, “he said.

That of the UN is the latest complaint from the Áñez administration, which has also brought its claims about an “interference” by Buenos Aires in its internal affairs before the Organization of American States (OAS).

His foreign minister, Karen Longaric, backed La Paz’s position saying that Argentina has tolerated political statements by Morales on Bolivian politics. And she indicated that the government of Alberto Fernández ruled in favor of a report by the United Nations High Commissioner for Human Rights, Michelle Bachelet, on political violence in Bolivia at the end of 2019., after the annulled elections. 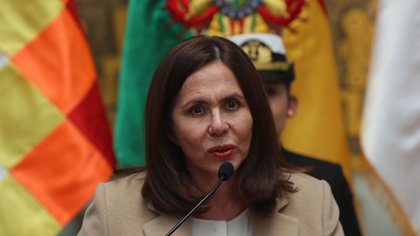 “Evo Morales abuses his position to generate political instability in Bolivia. It does not pursue an electoral or democratic benefit. It only seeks to provoke the conflict between Bolivians and evade their obligations before the Justice ”, Longaric denounced in dialogue with Infobae.

Áñez he got off the presidential last week, arguing about the need for the political sector that opposes the MAS to unify behind a candidate to avoid his return to the executive. The intention to vote of the interim president had dropped significantly in recent weeks, making her chances of winning the elections – or at least reaching the second round – almost nil.

“I do it to help the victory of those of us who do not want the dictatorship,” Áñez said in a recorded message issued on Thursday afternoon. “If we don’t join, come back [Evo] Morales, if we don’t unite, democracy loses”, He added.

The two candidates with the highest voting intentions are Luis Arce – former economy minister of Morales and his dolphin – and former president Carlos Mesa. If the polls are confirmed on the day of the vote, The former minister of Evo Morales would win in the first round, but would not reach 50% of the votes or at least 40% with a difference of 10% compared to the second, necessary conditions according to the Constitution to obtain the presidency.

Thus, there would be a ballot on November 29 between the two candidates with the highest votes, presumably Arce and Mesa. To conclude his message to the multilateral organization, Áñez invited the international community to observe the elections. “They will be clean and without fraud,” he concluded.

Jeanine Áñez announced that she is lowering her candidacy for the Bolivian presidential elections: “If we don’t unite, Morales will return”