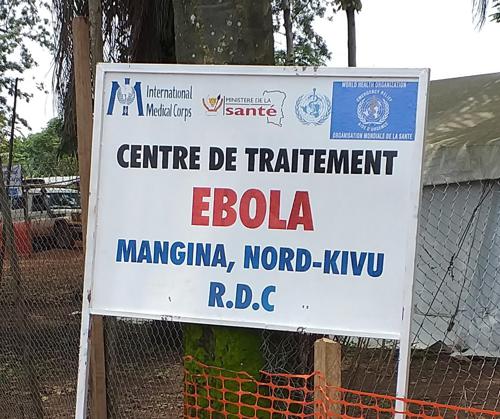 The Ebola treatment center in Mangina, a rural town located 30 km northeast of the city of Beni where the first cases of Ebola in North Kivu were detected. Radio Okapi / Ph. Martial Papy Mukeba
“/>

No case of Ebola virus disease has been recorded in the areas of the Beni health zone since October 30.

The coordinator of the response in this region congratulates the health providers for their bravery but especially the population who have taken ownership of the fight against Ebola virus disease in the Beni health zone.

Dr Michel Tosalisana, response coordinator, let it be known on Monday in Beni, when the campaign was launched to receive the booster dose of the vaccine against Ebola virus disease in Beni.

For him, it is the result of the awareness of the population who voluntarily agreed to be vaccinated in order to curb the spread of the virus in the community.

Dr Michel Tosalisana also talks about insurance with the current licensed vaccine which is already available.

“It is since October 30 that we have no longer registered new cases. Hats off to you, the service providers, and to the community we work for. Last times we were using the experimental vaccine. And this time, the approved vaccine is there, we must be happy because, there are not many protocols, we can no longer sign a consent, because the vaccine is already approved ”.

He added that the hundreds of contact cases scattered around the community have been found and have voluntarily agreed to be vaccinated.

This means that currently, the health zone of Beni has no case of Ebola virus disease, said Dr. Michel Tosalisana.

He calls on the population to continue with the observation of the health measures indicated by health professionals to block the road to this disease in the region.