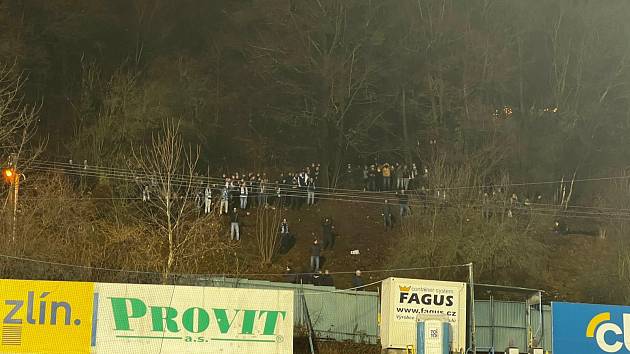 They have once again shown that they stand behind their pets under any conditions. Although the government has ordered sports clubs not to go to the stadium for more than a thousand people, which means a stop sign for visiting fans, fans of Ostrava’s Baník have found a way to cheer and see football. There are ideal conditions for this in Zlín. It had only one catch – to climb a steep hill on muddy terrain.

Great Budinský, the help of VAR and the fans were not enough. Baník in Zlín drew

At 3 pm, when the teams entered the playing area, a small group stood there, who began to sing the miner’s anthem. “There won’t be many of them,” said in the summer stands. Truth. It is an exaggeration to say that there were more police officers standing nearby than the fans themselves. The weather also played a role, which did not record a high number of visitors.

From the Zlín-Baník Ostrava match, November 27, 2021.Source: with the permission of Petr Kotala

Only a few minutes later, however, Zlín sounded like a thunder chant. Another large number of fans occurred, and so a crowd of several dozen, maybe even a hundred, heads emerged. At the end of the match – just at the time when the home team equalized to 2: 2 – they pulled out the banner “Better all together than split. Better behind the fence than behind the monitor. ” And then they started their pyroshow.

The Christmas image of Ostrava, for some kitsch, disgusting, according to the curator, is a step forward

“They must have felt and thank you very much for that. They were in large numbers, even though they could not go to the stadium, they stood there, they supported. Hats off. They drove us, “said Baník’s goalkeeper Viktor Budinský.

However, due to the development of the epidemic situation, it is possible that this form of support will soon have to be taken over by home and domestic supporters, which was noticed by the defender, 2: 2 goal scorer and former Baník quarterback Václav Procházka. “Every day something changes and for the worse, so unfortunately. We must abide by what is dictated. Today, however, we felt support, “praised Zlín’s Procházka fans.

There was also a soft thank you note after the match. The players were especially to thank the fans for their support, they didn’t show much on the field themselves and they could still be happy for the point in the result.