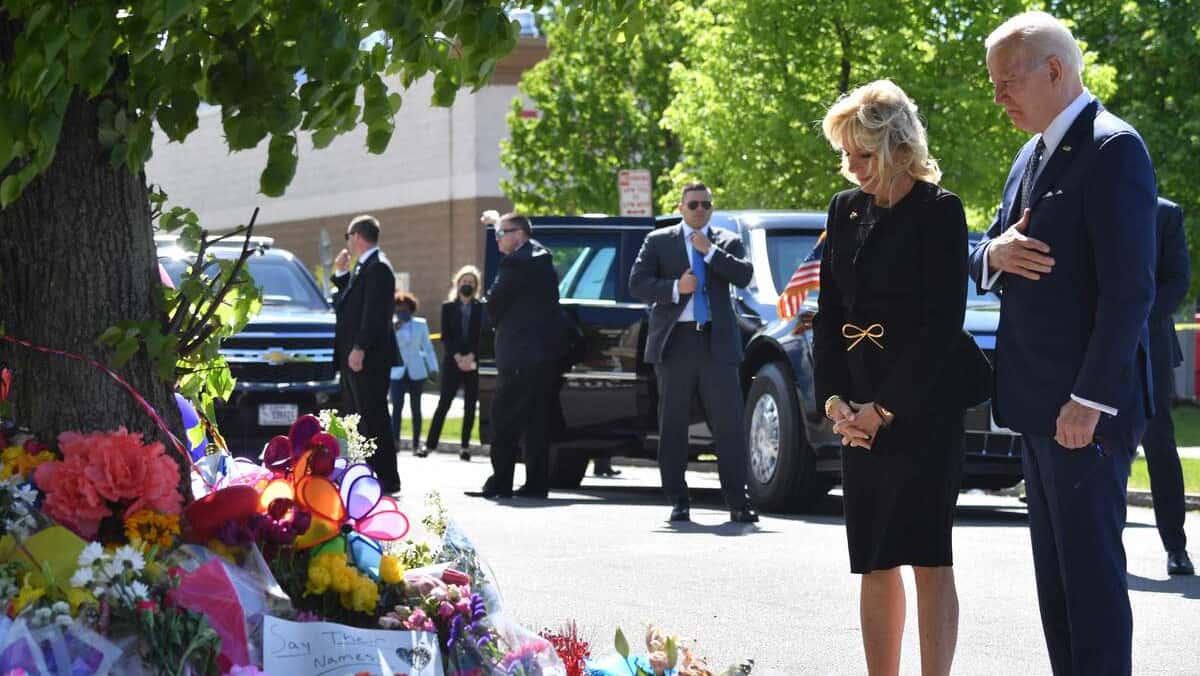 Joe Biden vehemently denounced the “poison” of white supremacism and those who help to spread it on Tuesday, after a racist killing spree that killed ten people on Saturday in Buffalo.

• Read also: Shock wave in the United States after the racist massacre of Buffalo

• Read also: Buffalo massacre: a mother witnesses the murder of her daughter on Facebook

In this city of New York state, where a young man adept at conspiracy theories such as that of the “great replacement” committed an assault rifle massacre on Saturday, the American president spoke of an act of “terrorism “.

Evoking this racist thesis of the “great replacement”, Joe Biden, very moved, very solemn, struck: “I call on all Americans to reject this lie and I condemn all those who spread it to gain power, votes, the money”.

“Those who claim to love America have given too much fuel to hate and fear,” the 79-year-old Democrat said again, without mentioning names or party affiliations.

“This venom, this violence cannot be the history of our time”, he pleaded, while the United States has experienced several killings in recent years targeting African Americans, Jews, people of of Latin American origin.

Listen to Luc Laliberté’s column at the microphone of Richard Martineau on QUB radio:

Joe Biden began his speech with words of comfort for the families: “the time will come” when the memory of the disappeared “will put a smile on your lips before bringing tears to your eyes”, promised this president whose life was peppered with family dramas.

He listed the names, recalled that one victim was broke while buying ‘strawberries to make her favorite pastry’, another wanted treats ‘for family movie night’, a dad had was killed when he came to get “a birthday cake” for his little boy.

The American president made a point of recounting briefly the lives put at the service of a community and of families, mentioning an old lady who went every day to take care of her husband residing in a retirement home, or a supervisor of the supermarket having tried unsuccessfully to arrest the killer.

Previously, the American president and his wife Jill Biden had stopped at an improvised memorial at the scene of the killing.

Under a dazzling sun, they advanced towards bouquets, words and candles placed at the foot of a tree, in a silence disturbed only by the breath of the wind and the clicking of cameras.

Jill Biden laid an armful of white flowers. Joe Biden, after removing his sunglasses, signed himself.

The president again called on Tuesday to regulate firearms: “I am not naive. I know the tragedy will happen again (…) But there are things we can do. We can ban assault weapons from our streets”.

The Democrat has long called on Congress to ban assault weapons – like the one used on Sunday. This is what New Zealand did after the racist massacre against mosques in Christchurch in 2019, a massacre which was also inspired by the alleged Buffalo murderer, Payton Gendron, 18.

But Joe Biden has always stumbled so far on a Republican opposition hostile to any kind of regulation.

The organization Gun Violence Archive has already counted more than 200 “mass shootings” in the United States this year, in which at least four people were injured or killed.

Including the one perpetrated on Saturday by this young white man, Payton Gendron, who before the massacre claimed to be “fascist”, “racist” and “anti-Semitic” in a 180-page manifesto.

Joe Biden again recalled on Tuesday that he had decided to run for the White House because he could not bear to see the ultra-right parading in August 2017 in Charlottesville (Virginia, south).

But since his election, he has seen his powerlessness to appease, as he had promised, an America plagued by racial hatred and bloodied by gun violence.

Constrained by his too thin parliamentary majority, confronted with conservative states endowed with extensive prerogatives, limited by a Supreme Court now firmly anchored on the right, Joe Biden had to content himself with acting at the margins, for example by issuing decrees on marginal limitations of firearms.