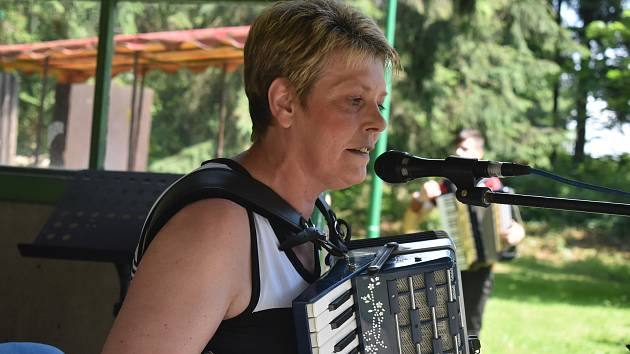 Accordion players and heligon players from Rokytna near Nové Město na Moravě came from all over the country. The duo Veselé heligonky came from Tábor. “We are here for the first time, we will play the song Škoda lásky, among other things, but you have to listen to the end. We have a slightly different version, “Bohumil Šmejkal and Jaroslava Basíková from Tábor advised the audience.

The boys from Moravia arrived again from Starovičky near Hustopeče. “We go to meetings of accordionists regularly, we used to have up to fifty performances a year. We were already looking forward to it, “said Slavek Strouhal and Kája Hájek, aka Chlapci z Moravy, in unison.

Head in a tambourine, a goat on the roof: firefighters from the Vysočina region help children and animals

“I didn’t miss a single year of the Rokyten Accordion. This year I will play a heligonka from 1941. She is two years younger than me, “one of the performers, Vladimír Zítka from Rozsoch, showed everyone a unique instrument.

Another of the regular visitors of the meeting in Rokytna, David Kopáček from Sezimovo Ústí, has a respectable thirty-three accordions and heligons in his collection. “I’m self-taught, I don’t even know music,” he admitted. However, he played the accordion very well. “He’s very good,” said one of the listeners.

Primary from Vysočina: The older age of mothers is also a question of ethics

Other performers also received applause. Songs were happy and sad. The duo from Sazomín amused themselves with the song Boky as a wardrobe, ten-year-old Anežka Strážnická from Náměště nad Oslavou brought the audience to the boil. “I’ve been playing for three years. I sang with Šlapet in Semafor and I have already won the accordion and heligonist competition twice, “Anežka Strážnická boasted about her stellar career, who was a very strong competition for others performing even at a young age.

See also  'I'm bored by the sea, so I'd rather Chrudim.' See how people are having fun on behalf of the Czech Railways campaign Home

The audience and the performers had a perfect time. However, more serious things also came to the fore. “I was a volunteer in South Moravia a week ago. I had tears in my eyes when I saw it there. That’s why I would like to dedicate one of the songs from my performance to people from there, “said Iveta Bláhová from Zubří.