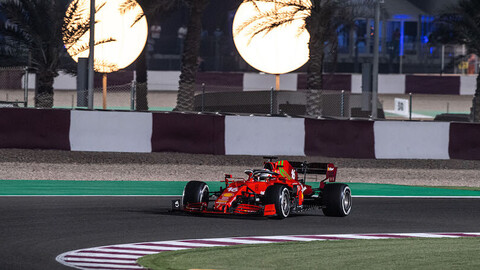 One minute and 22 seconds scored by the winner; Alonso, Ocon and Stroll finished up front. There Ferrari that leaves the Qatar it wasn’t the best of the year, yet, in a global key Constructors, have managed the race on a “shrewd” pace allowed to finish with two cars in the points and widen the advantage over McLaren.

If in absolute terms it was a negative GP, contextualizing the limits of SF21 it was possible to bring home the result. A perspective that Mattia Binotto explained by referring to the crisis suffered by Ferrari in France last summer.

Read also – Leclerc: “GP below expectations, we need to understand why”

“A GP below expectations? I would not say. A seventh and eighth place is not what one aspires to, though we knew it would be a difficult track for us, as for tire wear. This is a car with which we have suffered a lot at Paul Ricard from wear, it is not that the car has changed, but we have learned to manage it better than we had at Paul Ricard “.

Fears that dictated the approach to the race, which could have been run at a higher pace, exposing itself to the risks of tire holding, where instead the garage managed to bring home the strategy on a single pit, with tire change at lap 27.

“Right from the first lap we asked the drivers to never push to attempt a single pit: they kept driving, they never pushed in the first stint on the mediums, nor then on the hard ones until 10 laps from the end, when we were sure we could go to the bottom with the tire. I have to say it worked, if you look others who pushed when it was not needed and did laundry. Thanks to the team that knows how to manage the tires today, it’s clear that the car has a wear problem and we couldn’t push harder, but the team was able to manage it and that’s the positive aspect. “, explains Binotto.

The hitch of the double pit stop

A Qatar lived on the defensive compared to single-seaters during the slower championship, such as Alpine and Aston Martin. Probably a better placement, in the case of Carlos Sainz, would have been possible with a different race tactic: “The double pit stop, too bad there was a radio communication problem with Carlos, otherwise he would have been in front of Stroll after the pit and maybe even able to attack Ocon at the end and do better. Removed this radio problem, the double pit was managed well by the boys, returning from three consecutive races with fatigue and with a change of chassis between yesterday and today. I see positively the management of the track, the strategy, the tires, the mechanics, the reliability that allows you to get to the bottom – even the riders themselves had a good race – “.

Swapping positions is never an option

As proof of a race faced a little with the “handbrake on”, there is the evaluation of a race finale in which the train of cars Ocon, Stroll, Sainz and Leclerc found itself competing for fifth position. Unlike in the recent past, a temporary position change between Sainz and Leclerc to try and attack Aston Martin was not among the options discussed: “Charles also asked us over the radio, but We were managing the tires at that stage, it’s not that Carlos couldn’t go faster, we did not want to go, so as not to be in a position of risk, to puncture as happened to others “.

A positive element, in a season finale passed by difficult and subdued performances after the excellent exploits between Sochi, Istanbul and Austin, lies in the power unit. Choosing to replace the engine on Leclerc’s car – at the chassis change after qualifying – was never an option: “For us it would have been irrelevant to replace the power unit; we have introduced a new unit with development on the hybrid side. Our engine is reliable and does not degrade in performance with km. If we had also changed the engine we would not have finished eighth “.