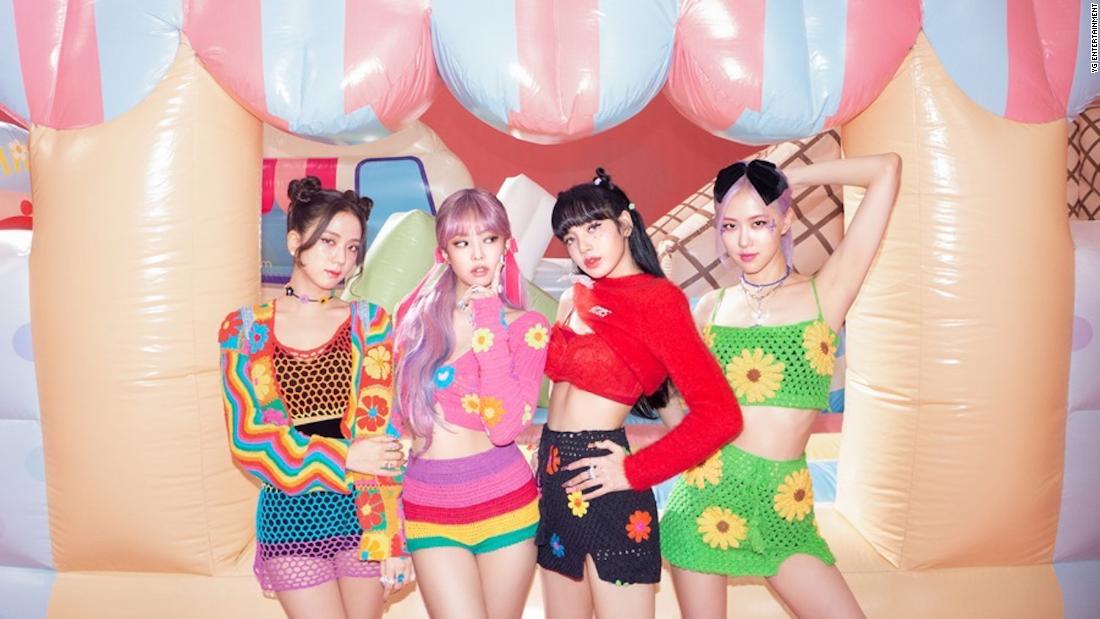 After teasing fans with posters, snippets and stills for weeks, South Korean megaband Blackpink and American pop princess Selena Gomez unveiled their track “Ice Cream” on Friday. And in addition to the song’s dangerously catchy, upbeat vibe, the accompanying video is a stylistic treat, too.

Serving up a series of retro-inspired looks referencing 1950s pin-ups and 1970s flower power — think high-waisted beachwear and macramé outfits — the three-minute-long video boasts all the glossy visuals we’ve come to expect from both Blackpink and Gomez.

Selena Gomez in the video for “Ice Cream” with Blackpink Credit: From YouTube

In the opening scene, the American star pairs a striped bikini with a sailor hat, white gloves, chunky gold hoops and wind-tousled hair, as she drives up to meet the K-pop group in an old-school ice cream truck. Lisa, Jisoo, Rosé and Jennie — who are known for their maximalist fashion — then appear with chunky gold necklaces, a Dior newsboy cap, pink hair and cherry-shaped earrings. The message is clear from the start: Bold outfits and highly curated embellishments are the order of the day.

From then on, it’s one colorful fashion moment after the other.

In keeping with each member’s signature image (cutesy Jennie; feminine Jisoo; street style queen, Rosé; and rapper with attitude, Lisa), the singers transition from feathered skirts and OTT tops to outfits that wouldn’t look out of place in teen movie “Clueless,” complete with pink headbands and plaid coordinates.

Members of Blackpink in the video “Ice Cream” with Selena Gomez Credit: From YouTube

Then, around the two-minute mark, the 1980s get a clear nod when the quartet appears in complementary black-and-white ensembles as they pose in a hot-pink ice cream store.

“Throughout the music video we tried to have each look suit that entire set, and we especially focused on wearing bright colors that suit the overall vibe of the music and concept,” Blackpink told CNN Style over email. “We really wanted to portray that fun, bright, summer energy through our outfits, and we hope this message went through to our fans.”

Gomez’s sartorial contributions are just as captivating, though slightly more toned-down than her K-pop counterparts. The singer — who shot her portions of the video in the US, not South Korea, due to the pandemic — is seen eating ice cream in a neon-green visor and Puma racing romper. She then serves up more retro vibes in a polka-dot yellow top and blue culottes, before appearing in a Chevrolet with an off-the shoulder playsuit that couldn’t scream pin-up any louder if it tried.

Her makeup is just as eye-catching, perhaps offering an early glimpse at her highly-anticipated beauty line, Rare Beauty, which launches next week. And the backdrop makes “Ice Cream” even more compulsive viewing. It’s a bonkers theme park with giant inflatable cones, cotton candy houses and giant cherries — an elaborate, saccharine visual feast that changes just as quickly as the fashion on show.

The video comes courtesy of director Seo Hyun Seung, who has worked with a number of notable K-pop bands, including 2NE1, iKON and Big Bang, and has a penchant for colorful, whimsical sets.

“Ice Cream” will appear on Blackpink’s forthcoming album, “The Album,” and follows high-profile collaborations with the likes of Dua Lipa, in 2017, and Lady Gaga earlier this year. The Lady Gaga and Blackpink track, “Sour Candy,” earned the K-pop stars their highest position on the US Billboard Hot 100 to date. And “Ice Cream,” with its pastel-coated playfulness and social media hype, could be another crossover hit for the four-piece.