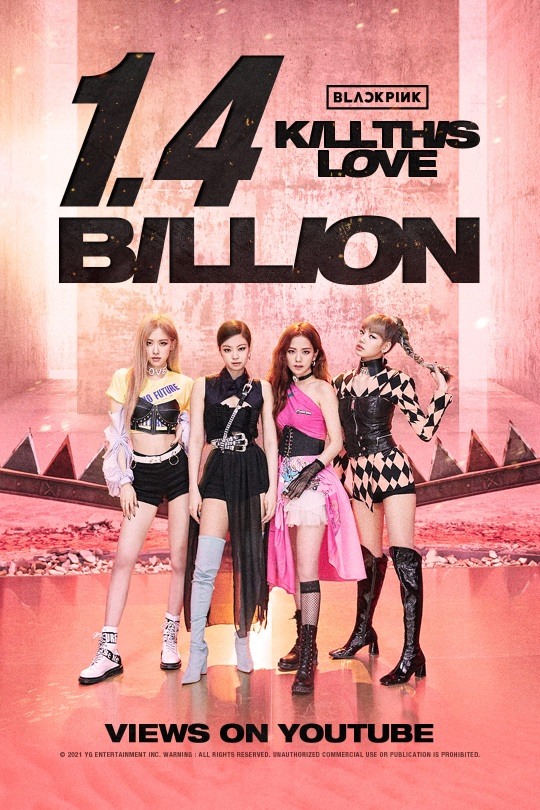 According to YG Entertainment on the 26th, the music video for ‘Kill This Love’ surpassed 1.4 billion YouTube views at 5:58 pm the previous day.

With this, Blackpink became the first K-pop group to have two music videos with more than 1.4 billion views. Previously, there was another mega-hit song ‘DDU-DU DDU-DU’, and this music video recently broke through 1.7 billion views, breaking new records for the first and highest views of a K-pop group.

In terms of all Korean artists, it is on par with Psy, who enjoyed worldwide popularity with the music videos for ‘Gangnam Style’ and ‘Gentleman’ about 9 years ago. Considering that Blackpink’s ‘Kill This Love’ was released in April 2019, the trend of the music video views is overwhelming.

The music video for ‘Kill This Love’ captured the hearts of fans around the world with BLACKPINK’s powerful yet charismatic dance lines and sophisticated visuals. The action like shooting a long gun and the addictive point choreography were evaluated as impressive, and it was named as the only K-pop in the top 10 of the ‘2019 Most Viewed Music Videos in the World’ released by YouTube.

The soundtrack also achieved remarkable results. The song reached #41 and #24 on the Billboard 200 and Hot 100, respectively, on the US Billboard main charts in the first week of its release, replacing the top K-pop girl group rankings at the time. In addition, Spotify, the world’s largest music platform, is the only K-pop girl group to surpass 500 million streaming times.

See also  Spotify snatches the price of a star podcast

Meanwhile, as Lisa’s solo single album ‘LALISA’, released on the 10th, swept various global charts, the number of subscribers to Blackpink’s YouTube channel is showing an explosive increase. Now with more than 67.3 million people, this is the number one spot among male and female artists worldwide.

The song ‘LALISA’ topped the iTunes Top Song Charts in 72 countries, ranked No. 1 on the YouTube Song Top 100 Chart, and No. 15 on the Spotify Global Chart. In addition, it entered the 2nd place on the US Billboard Global 200, 84th on the Billboard Hot 100 chart, and 68th on the UK Official Chart Singles Top 100, solidifying its presence in the mainstream pop market.

Blackpink is breaking new records on its own, regardless of group or solo. Lisa’s title song ‘LALISA’ music video surpassed 100 million views in two days, and then 200 million views in about 13 days, setting a new record for the shortest K-pop female solo artist. The Initial Chodong sales of ‘LALISA’ album exceeded Black Pink’s ‘THE ALBUM’ (690,000 copies) based on Hanteo Chart’s tally of 73,621 copies, and it was found that it exceeded 800,000 copies if overseas sales were included.
[email protected]