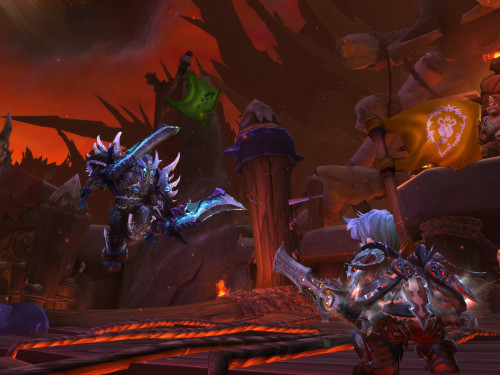 Since we implemented an updated design for Shadowlands PvP in the Beta This week, we have seen several requests for a more detailed explanation of the intentions behind this system.

Earlier in the Shadowlands Beta, we tested a skin where Conquest served as currency for the Grand Chamber and for purchasing PvP gear from vendors, with a weekly maximum. From the beginning, two of our main goals with the PvP team in Shadowlands were:

However, in beta testing, we saw that since no more Conquest can be earned after reaching the weekly limit, using the same currency for both systems limits Conquest and winning the Conquest team requires much more effort than the that had been done in previous expansions of the Conquista system.

Currently in the game, we have updated Honor to be a currency that is rewarded for all PvP activities, including Scored. So in this design, we’ve changed the Grand Chamber to require Honor to be for Scored activities only. Earning Honor through Punctuated PvP each week will yield a huge Great Chamber reward, allowing us to separate Conquest from the Great Chamber and set the Conquest cap much lower.

This means that players who do Rated PvP will get their purchases from the PvP vendor much faster, and since the Honor from Rated activities is not limited those who are PvP players can continue progressing to unlock the second and third options of the Grand Chamber. after reaching the weekly maximum.

As the Beta draws to a close, please know that we greatly appreciate all the testing and player feedback we’ve received since PvP testing began in the Shadowlands Beta. Thanks for all the forum posts and tweets and bug reports and Youtube videos. We’re looking forward to the PvP scene in this expansion.