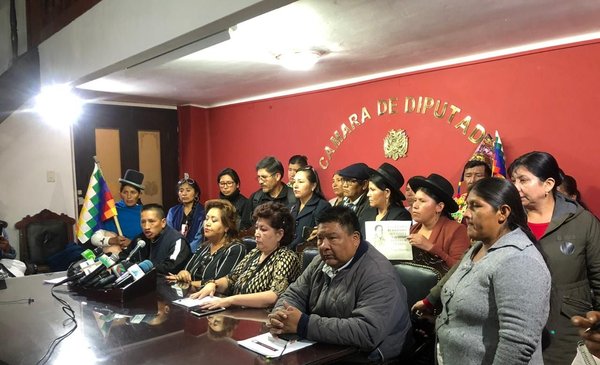 The interim government of Bolivia today called for a dialogue with supporters of former president Evo Morales to deactivate the protests that left at least 23 dead and more than 700 injured and avoid the shortage of supplies in La Paz, after the coca growers of Cochabamba gave 48 hours to the self-proclaimed president Jeanine Áñez to resign.

However, the Movement for Socialism (MAS), Morales’ party, demanded the “withdrawal” of the Armed Forces as a condition for talks.

The call, anticipated earlier by other officials, was formalized this afternoon by the Minister of Communication, Roxana Lizárraga, and includes the authorities of the La Paz department and the city of El Alto, bordering the capital.

“I am pleased to address the courageous city of El Alto and especially its representatives from the 14 districts and 20 provinces; the reason for this is to cordially participate in a joint work and dialogue table to meet their respective demands in search of to be able to reach agreements that allow pacification, “he said when reading the invitation letter, according to the state news agency ABI.

“We do not want to intervene by force because we are not going to authorize an aggressive intervention, we are going to wait for the dialogue mechanisms to be exhausted,” added the Minister of Hydrocarbons, Víctor Zamora, in relation to the blockade of the Senkata fuel plant. in El Alto, which has already begun to cause shortages in the capital.

But the MAS had already warned that it will not dialogue as long as the government does not remove the Armed Forces from the streets.

“We demand the withdrawal of the Armed Forces; give conditions for peace, give conditions for a sincere dialogue; it cannot be that while dialogue is being promoted on the one hand, on the other hand massacres are being carried out with our people,” said the Sonia Brito deputy at a press conference, accompanied by other legislators, according to the EFE agency.

Instead, the MAS summoned for tomorrow “all the heads of the caucus (of the two chambers of parliament) to work, talk, debate the political situation”, in “a clear sign that the MAS wants to pacify this country.” added the Masista deputy Betty Yañíquez.

Meanwhile, Government Minister Arturo Murillo said that today the “intensity” of the conflict had dropped by half and warned that the government will initiate legal actions against MAS legislators who incite violence.

He indicated that the protests “have decreased by 50% in intensity”, although there were still “some confrontations taking place in Sacaba (Cochabamba department), although” decreasing the intensity “of them, and sources of conflict remained open in El Alto and Yapacaní ( Santa Cruz).

In addition, Murillo assured that the government will begin to criminally prosecute a group of MAS legislators for inciting violence.

“There are senators and men and women deputies, not all, a few, who are doing subversion; I already have lists, that the same leaders of various areas are passing me, saying that they are forced to do this or that; they are going to start arresting with orders from the Public Ministry; I am going to set up a special apparatus of the Prosecutor’s Office, because we cannot allow this to continue, “he said.

Meanwhile, the interim government avoided ruling on the ultimatum that the coca growers in the Cochabamba region of Chapare – where Morales emerged as a union leader – gave last night for Áñez to resign no later than 48 hours.

In Sacaba, during the wake of five of the victims of the protests, the coca growers warned that if Áñez does not resign, they will carry out a national roadblock indefinitely, according to El Deber and the ANSA agency.

At the same time, other groups related to Morales plan to completely surround La Paz and El Alto by blocking their accesses, and preventing their supply as a form of pressure to achieve the resignation of Áñez, as revealed by unidentified leaders to the La Paz newspaper Página Siete.

“Not even a grain of food has to arrive in La Paz; producers have been prohibited from taking food from their farms; it is preferable for it to rot, than to give food to the k’aras (whites),” said a peasant leader .

On the other hand, the Minister of the Presidency, Xerxes Justiniano, affirmed that the controversial decree that exempts members of the Armed Forces from criminal responsibility in relation to the repression of protests “does not in any way become a license to kill.”

“It is a deterrent, because what the government intends is simply to avoid confrontation, what it intends is to prevent further deaths and, above all, (it intends) for social peace to be restored in our country,” Justiniano said last night, at a press conference.

That decree, known yesterday, was harshly questioned by the UN High Commissioner for Human Rights, Michelle Bachelet, and by the Inter-American Commission on Human Rights (IACHR), which today reported that the protests that began on October 20 left 23 dead and 715 wounded (of them, nine dead and 122 wounded only last Friday).