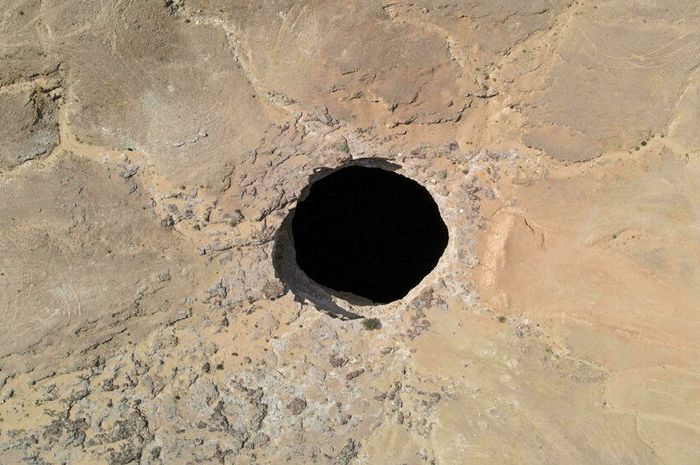 The appearance of the Barhout Well, better known as the Well of Hell in Yemen.

Nationalgeographic.co.id—Barhout Well or known by the name Hell’s Well (Well of Hell) from Yaman believed by locals to be a prison for jinn. Has a diameter of 30 meters, Barhout Well located in the middle of the desert in Al-Mahra province, Yaman.

Last week, the Oman Caves Exploration Team (OCET) managed to reach the bottom of this well. Reported from France 24, the team of cave explorers lowered eight members into the well, while the other two remained at the top.

This team is said to be the first to successfully descend to the bottom of the well. It is known that the depth reaches 367 feet or 112 meters. Much different from the spooky story about Barhout Well, cave explorers reported findings from the bottom of the well. Explorers found cave pearls, animal carcasses and snakes that didn’t bother them as long as they weren’t disturbed.

“The passion drives us to do this. We feel that this is something that will reveal a new magic and a piece of history Yaman,” said Mohammed al-Kindi, professor of geology at the German University of Technology, Oman and the OCET team AFP.

“We collected samples of water, rock, soil and some dead animals but have not analyzed them yet. There are bird carcasses which do give off a bad smell, but there is no strong stench,” he continued.

As for footage given to AFP shows cave formations as well as gray and lime green cave pearls formed by water droplets. Earlier, in June last office Yaman said they didn’t know what was in it and added they never got to the bottom.

Also Read: A Man Finds A 500-Year-Old Well Under His House

The Barhout Well is 112 meters deep.

“We have visited the area and entered the well reaching a depth of more than 50–60 meters. We noticed strange things inside, we also smelled something strange. It is a mysterious situation,” said Salah Babhair, director general of the Mahra geological and mineral resources survey authority, in June.

Reported from Live Science, the exact age of the Barhout Well is unknown, estimated to be millions of years old. Many local myths have sprung up about sinkhole (hole) or dolin, apart from being a prison for the jinn, there are also those who believe that if they are too close to the well they can fall into it.

Other than that, AFP reported that others claim this gaping hole is a supervolcano capable of destroying the earth. However, there is no scientific evidence to support this evidence. In the past, people also reported a foul smell emanating from the well, sparking stories about this place as a gateway to hell.

Philip van Beynen, an expert at the University of South Florida who was not involved in the project, says there are different types of sinkhole (hole) or doline. He said the most common were crumbling dolines and subsidence.

Doline collapse is formed when the cavity in the bedrock, below the surface expands in such a way. This makes the upper part no longer supported, as a result the rock and sediment above suddenly collapse into the cavity. While doline subsidence occurs when surface sediment slowly drips into small cavities beneath the ground until a sinkhole is formed.

Both types sinkhole this relies on a special type of landscape known as karst. Its characteristics can be seen from carbonate bedrock, such as limestone and dolomite which dissolve in water and lead to caves, springs and sinkhole.

Unfortunately it is difficult to say exactly how or when sinkholes formed. “Unless it happened when people were staying on site and filming the event,” he replied.