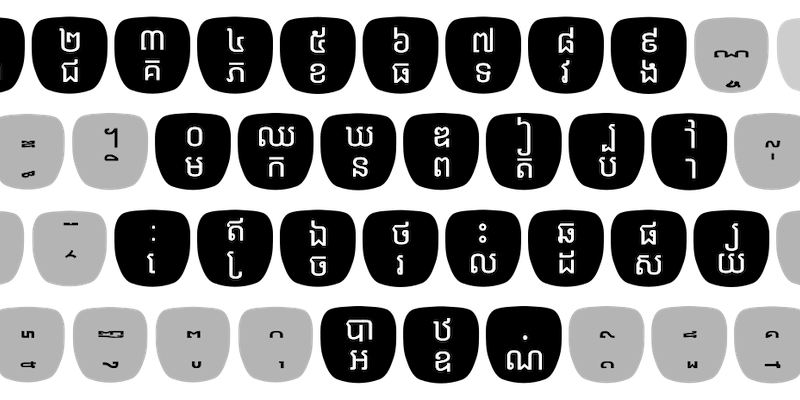 Among the various revelations contained in the internal documents of Facebook released recently by former employee Frances Haugen, a rather surprising figure emerged: almost half of the global traffic of voice notes exchanged on the Messenger application in 2018 came from Cambodia.

The percentage surprised Facebook itself, which in fact commissioned a survey among local users to understand the causes: it found that it did not depend so much on a problem related to the platform or the level of literacy in the country, but on the fact that for Cambodians to write a message in their mother tongue on digital keyboards it was just too difficult.

The official language in Cambodia is Khmer language, the one spoken by the majority of the country’s 17 million inhabitants and which has more characters than any other widely used language in the world: 74. But in a small and not very profitable market like Cambodian, technology companies have never invested a lot of money and this has meant that keyboards and word processing software have spread with great delay and slowness compared to those for most of the most common languages.

The success of voice messages over those written in Cambodia was told in a magazine article Rest of World, which deals with analyzing the impact of technology in countries “far from the Western bubble”. The site reports that anomalous distributions of data consumption, biased in favor of voice messages, had been found by Facebook – Meta, as it is now called – also in other countries, although not at the level of Cambodia, and also on the other application proprietary messaging system, WhatsApp.

See also  satellite messages would be restricted to certain countries

The first word processing software available in Cambodia had been developed to be used in English, although the Unicode system, which associates an identification number to each character in order to standardize word processing between different software, actually arrived quite early, between 2006. and 2008. But the problem was the keyboards: designing the physical ones with 74 keys was quite complicated, and the same problem arose for the digital ones. They were designed so that each key housed two characters, a feature that however forced users to continuously switch from one level of the keyboard to another. The limited number of fonts available in Khmer characters, then, often meant that the same text was often not readable on different devices.

This is why the introduction of the voice message functions on the main messaging apps was soon exploited by Cambodians. As one had pointed out studio of the United States Agency for International Development in 2016, most Cambodians preferred to phone or communicate through voice notes because it was easier and faster than typing on a computer keyboard or smartphone. In addition, many did not know how to use keyboards in Khmer or at least considered it too cumbersome and time-consuming to do so.

– Read also: Because in English the spelling and pronunciation are so erratic

Various Cambodians interviewed by Rest of World they said that most people they know communicate through voice notes not only as a matter of convenience, but also because they are tools that allow you to express yourself better than written messages. Today also Prime Minister Hun Sen uses them, who in fact got into trouble when some recordings have been disseminated without your consent.

Cambodians don’t seem to have too much trouble talking about private things in public or recording voice messages on the street. It is a habit that also has disadvantages, first of all the inconvenience of not being able to read the latest exchanges with the interlocutor or to be able to do a text search in the history, but it is also faster for the speaker. Written messages are mostly used for business purposes or for exchanges in English.

Spanish computer engineer Javier Sola, who had worked on a team since 2005 to develop a Khmer word processor program, told Rest of World that although most laptops are sold with keyboards with Latin characters and English layouts, there are now more innovative keyboards that make it easier to type words. But many people don’t even know they exist: “over the years, habits have cemented”, Sola noted, and for this reason many simply continue to use voice messages.

However, using keyboards in Khmer seems so complicated that according to Cambodian computer engineer Sok Pongsametrey many young people prefer to write Khmer words on their smartphones using the Latin alphabet. One thing that according to Pongsametrey is making it difficult for his colleagues who are working to develop artificial intelligence in Khmer, and which according to other critics could also create problems for girls and boys who risk losing familiarity with systems to write in their mother tongue. .

– Read also: Sure Neanderthals weren’t great conversationalists, but maybe they talked to each other