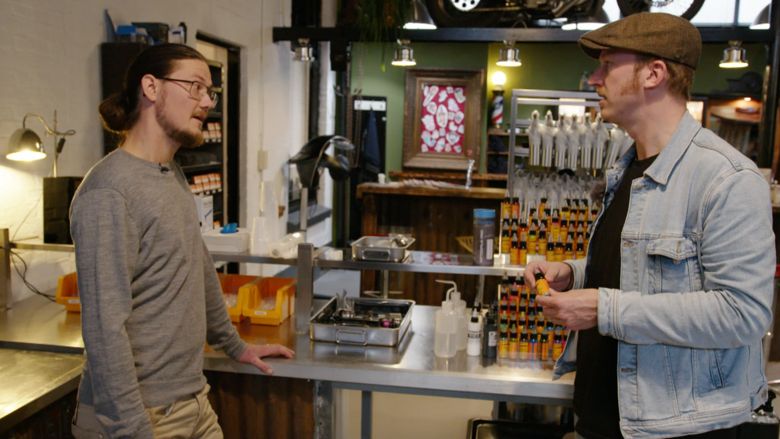 ‘Which tattoo do I want and where do I want it on my body?’. Everyone asks these questions when getting a tattoo, but have you ever wondered what health risks are associated with a tattoo? There are different types of ink that contain substances that are potentially carcinogenic.

PAHs, heavy metals, preservatives and azo dyes; all substances that can be in the ink of tattoos and that are carcinogenic. The NVWA monitors these substances in response to notifications, but can consumers also monitor this themselves?

‘That is almost never possible,’ says Thomas Rustemeyer, professor and dermatologist at Amsterdam UMC. ‘The tattoo artist often doesn’t know what’s in it. The labels are currently generic. The rules are clear, but the control on them is poor.’

‘Manufacturers have to prove that the ink is safe, whereby safety can be divided into three categories: proven safe, not proven safe and proven unsafe. The substances that are now in it are not proven safe, but also not proven unsafe,’ says Gerrit Grootenhaar, chairman of the Dutch Branche organization Tattoo Kunst and owner of tattoo shop Sailors & Crooks.

‘The bottom line is that there needs to be an investigation into exactly what ink does. That task now lies with the producers, because they have to demonstrate that we are allowed to work with their products. But at the moment I have not heard whether they are investigating this.’

In order to provide consumers with more information and to better monitor the inks, new European legislation will be introduced on 1 January 2022. ‘A tattoo artist must be able to show the consumer the label of the ink used from that date. In addition, a tattoo artist must keep track of which ink he has used for each customer’, says the NVWA.

See also  Our reporter checks how hard the Covid Safe Ticket is being used... (Brussels)

‘It is the responsibility of the supplier to ensure that tattoo dyes comply with the Tattoo Dyes Commodities Act Decree’, according to the NVWA.

Tattoo shops not aware of the new legislation

But is the supplier aware of this? A tour of Fons along several tattoo parlors and suppliers shows that many of them are not aware of this new legislation at all. Grootenhaar believes that research into the inks should have been done much earlier.

‘It is possible that a large part of the inks will suddenly be banned, because it has not been proven whether or not it is carcinogenic. It is therefore also important for us that more research is done into this and that we do not suddenly have to deal with certain ink that is banned.’

‘As a trade association, we must be able to rely on it being safe. There is now a danger, because later you may have to ban things and then an underground scene arises. Then you really run the risk that dangerous inks will suddenly be used in the future.’

What do we now know about the risks?

The RIVM indicates that the cancer risk of tattoos is small, but not negligible. The numbers of how big the chance is that you can get cancer from a tattoo vary widely. According to the RIVM, this depends on the following factors:

But what is the chance that you can get cancer from this ink?

According to Rustemeyer, much more research needs to be done. ‘Some studies have been done and a study has shown that someone with a tattoo gets cancer more quickly – it often concerns bladder cancer – but these studies are all very thin.

‘You need a lot of people with a tattoo for such a study and who also subsequently developed cancer. Look at smoking and tobacco, it took decades before it was shown to be carcinogenic.’

Rustemeyer has also researched the inks himself. ‘We have found inks containing hazardous substances. That depends on the color. With black ink, for example, which is made from soot, there is a good chance that it is made from PAH substances.’

It is therefore not yet possible to check whether the inks from your tattoo artist are safe. Tattooists and importers can only provide certainty about safe dyes if they have had the inks tested.

However, it is wise to only go to a tattoo artist with a GGD permit. Then you are assured that the tattoo artist works hygienically. In addition, the tattooist is more likely to use safe tattoo dyes. On the website www.veiligtatoeerenenpiercen.nl you can find out which tattoo artists have a permit.