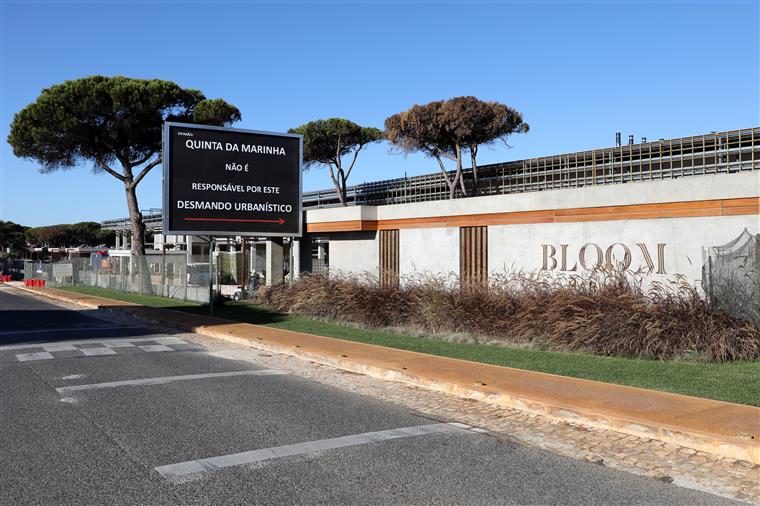 On Rua das Palmeiras, one of the main arteries of Quinta da Marinha, there are black posters with the inscription «Opinion: Quinta da Marinha is not responsible for this urban mismanagement» accompanied by a red arrow pointing towards the buildings under construction that will constitute the Bloom Marine. Already in the notices, it is read on a white background: «Quinta da Marinha holds, at all times, the legal right of preference in the transaction of these houses/buildings».

Released at 7:00 am on October 1, by Quinta da Marinha SGPS, led by Miguel Champalimaud, these messages will be, Nascer do Sol learned, a retaliation by two promoting companies, Zaphira Capital and Reformosa (of the Chinese-American businesswoman Ming Chu Hsu), having acquired the land of approximately 14 hectares after Champalimaud had lost it to the bank.

Initially, it was announced that Bloom Marinha would provide housing of small types (6 T1 and 28 T2) and medium or large types (30 T3, 12 T4, 6 T5 and 6 T6). However, this number is expected to differ due to the high demand for housing with outdoor spaces since the beginning of the pandemic, taking into account the need for isolation and the successive confinements implemented in different countries. Thus, it is expected that the space that would be destined for two houses, by way of example, can be transformed into one destined for only one. If, in a previous phase, 50% of buyers were foreigners and 50% were Portuguese, currently there are more of the first than the second. All houses, inserted in lots with a dimension between 320 m2 and 2,900 m2, will have their own swimming pool and private garden. Zaphira Capital and Reformosa also intend to create a commercial area – with, among other establishments, a gourmet supermarket – which all residents of Quinta da Marinha and not just Bloom Marinha’s residents can enjoy.

“He was always a litigator and this scenario is not surprising. He has had attitudes such as putting up posters and destroying the trees around Bloom Marinha for many decades», explains a source, who prefers not to reveal his identity for fear of reprisals. The truth is that, among cypresses and other autochthonous species, Champalimaud led Bloom Marinha – whose project he had conceived “before he ran out of money for it” and this was carried out many years later without him – to see the investment of 100,000 euros that he had made to make the area greener and more aesthetically appealing.

Waking up to the sound of chainsaws

“Megalomania comes to this. We just need to search online to understand that this gentleman has always wanted to recover what he thinks is rightfully his just because it once belonged to his family and/or even to him in the past. As if the inheritance continued to exist and there had been no monetary problem or any sale”, stresses the aforementioned source, recalling events such as the one reported in the article Árvores below and criticism of the Sintra-Cascais Natural Park, published in the Público newspaper on 16 of August 2000.

«Miguel Champalimaud does not forgive the Government for the obstacles placed on the projects of the Quinta da Marinha group and believes that golf courses and other tourist developments would defend the Sintra-Cascais Natural Park much better. Yesterday, the businessman went on the attack and advanced on his own with cleaning and felling actions. Reforestation can wait until tomorrow. The criticisms of the management of the protected area are not”, reads the article by Público.

Twenty-one years ago, after the great fire that broke out in the Sintra-Cascais Natural Park, Champalimaud ordered “half a dozen workers from the construction company Jodofer – which usually works for the Quinta da Marinha group” to walk “in the picnic park in the Winch, chainsaw in hand, cutting down some of the trees affected by the fire».

See also  Arcelor, Patuanelli: "The company does not comply with the agreements. For months, various excuses, the last one is the Covid. Now start from agreement of march"

«In anticipation of the actions to be developed by the Government to recover the burned area in the Sintra-Cascais Natural Park, Miguel Champalimaud, chairman of the Quinta da Marinha group administration, yesterday marked the start of preliminary work on cleaning and cutting trees in the area of Vale da Foz, next to Guincho”, at the time, described Público, drawing a partial portrait of the man who carried out the “declared expression of distrust regarding the deadlines to be met by the Government” when he did not wait for it to start the reforestation process. .

“As promised the day after the fire, here we are starting the work to recover the burned area”, the businessman said.

The situation described is very similar to that which took place a few weeks ago and was denounced by guests of hotels located in the vicinity who, hearing the sound of chainsaws in the early morning, made a point of trying to understand what was happening.

“This man’s bad livers are already known to most people. He didn’t even want the firefighters to put out the fire that was dominating the golf course because, in his opinion, they were going to destroy it,” says one of the sources contacted by Sunrise, making it clear that “only someone who doesn’t love nature does things like this».

In addition to the destruction and felling of trees, Champalimaud had the wooden pillars that had been placed on the sidewalk cut to prevent abusive parking. Even today, the traces of its previous existence form a sort of row a few meters from the place where workers struggle to finish building the two houses that, in principle, will be ready to inhabit by the beginning of next year.

«At Quinta da Marinha there are public and private spaces (access roads, verges, flower beds, etc.). These in particular are private. Residents do not pay for access/use of public roads. Not at Quinta da Marinha, nor anywhere else in the county. In reality, this is a dispute between two private parties (Quinta da Marinha SA and the company Zaphira, responsible for the works of the Bloom Marinha Condominium), in other words, it is a private legal situation, as no green space was damaged. of public domain or damage to urban furniture», clarifies, at Sunrise, the Municipality of Cascais. Another source who also did not want his name to be made public stressed that Champalimaud “insists on continuing to charge people money.” “Does it make any sense for the owners to spend a lot of money for the houses and still have to pay them to move around Quinta da Marinha?”, he asks.

Nascer do SOL wanted to understand if this climate of tension also exists between Quinta da Marinha Original and other adjacent projects, such as Marinha Prime and Marinha Garden Residences. “As for the questions you ask us, we would like to refrain from commenting. In reality, Marinha Prime has no involvement in them and we would like to remain that way», reacted the management of the enterprise.
It is known that Bloom Marinha has already filed an injunction and is waiting for a favorable decision from the court.