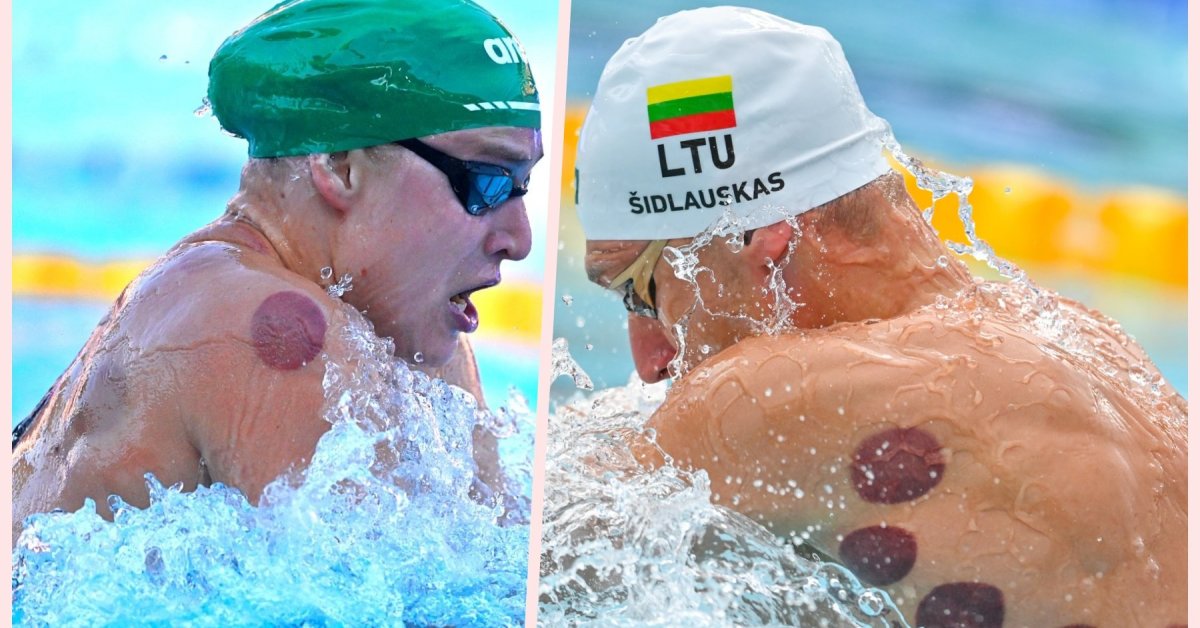 They are clearly visible even through splashes of water. They become even more visible when swimmers emerge from the pool at Rome’s Foro Italico sports complex.

At the European swimming championship in the capital of Italy, the bodies of all the swimmers of the Lithuanian national team and not only them are covered with brown circles – bright or already faded in the skin.

No, these are not traces of paintball games or passionate kisses. And there are certainly no dangerous fish in Rome’s outdoor swimming pool.

These are the marks left by the medicine cups, which sometimes work faster than the masseuse’s hands.

When the physiotherapist of the Lithuanian national team, Indrė Kalnutė, touched the biceps of Andrias Šidlauskas, who had returned from the competition, she called it “stone” – the muscles of the arms remained as if frozen after the competition, so cups were needed to loosen them.

“I came back late, like 10 p.m., I ate dinner, instead of a massage they just put on cups,” said Andrius Šidlauskas about the crazy rhythm of the starts, when after winning bronze in the 100 m breaststroke and receiving the award, he had only half a day left to prepare for the 200 m qualifying competition in the morning.

“To stand up, so that the blood moves faster, so that you don’t need a massage, and the body heals itself”, – the 25-year-old swimmer, who reached the highest places in his career at this European Championship, explained the meaning of the cups.

See also  What Is Low Blood Pressure, Why Does It Happen, and What Does It Do?

The former professional basketball player took up the position of physiotherapist of the Lithuanian swimming team after replacing Andrii Bogdelis, who worked with the best swimmers of the country for several years.

I. Kalnutė, who has been working with Lithuanian swimmers since October of last year, is trying to combine her experience as an athlete and a physiotherapist, where one of the tools is cups placed on the swimmers’ bodies.

“Each sport has its own nuances. Swimming is no exception – the body moves differently in water than on land, said the physiotherapist of the Lithuanian swimming team. – Every athlete needs individual care, recovery, and physical therapy exercises. The duty of a sports physiotherapist is the prevention and recovery of sportsmen’s injuries after heavy physical exertion during training and competitions.

To accomplish these two goals, I use a variety of therapies, exercises, and tools on our swim team. One of them is vacuum cups.”

The physiotherapist of the American swimmer, who won the most titles among all athletes in the history of the Games, used this method to restore M. Phelps’ muscles after exertion.

Some joked that Mr. Phels may have fallen asleep on his medals, but the USA swimming superstar did a big promotion for the cups. In seven years, their use has rapidly become popular in various sports: basketball, tennis, football, cycling and others.

“Vacuum cups remind many of the glass cups seen in childhood, which grandmothers or mothers used to place on their backs.

I was introduced to vacuum cupping therapy and practice in Canada. After I started using them in Lithuania, I get a lot of questions about what they are for and what their benefits are, – said I. Kalnutė. – Sports medicine claims that microtraumas heal macrotraumas.

Muscle tissue consists of fibers, they are bound together into fibers, and thus they form a whole muscle. An untrained person has muscle fibers of different lengths, short or long. During intense exercise, the short myofibrils break. With regular training, the myofibrils inside the muscle fibers become uniform in length. During physical exercise, the muscle structure is always destroyed and damaged, fibers are torn, and microtraumas occur. During muscle healing, new fibers are formed, the muscle increases in size (hypertrophies). So, intense training is a kind of muscle damage, which is what the muscle growth process is based on.

During the championships, athletes’ bodies are exposed to a lot of physical stress and have very little time to recover, and they need to be in top shape between swims.

The recovery process can be improved by using vacuum cupping therapy. After intense physical exertion, the cups help reduce muscle pain, improve blood circulation, and stimulate the tissue regeneration process. The effect is similar to a massage.”

Although the load is often similar, some swimmers use cups frequently and some do without them.

“It should be noted that although there is still little scientific research on the effects of vacuum cups, when working with professional athletes, I noticed that vacuum cups help some more than massage,” said I. Kalnutė. – Each time an athlete lies on the physiotherapist’s table, cups will not necessarily be placed immediately.

I use a variety of techniques depending on the athlete’s injury or recovery needs, and vacuum cups are just one tool.

The process itself takes about 20 minutes. Most often, this method of treatment is applied when the athlete develops a muscle strain or inflammation. Time doesn’t matter – before or after swimming.”

Be that as it may, the leaders of the Lithuanian swimming team are doing well so far during the marathon competition at the European Championships.

After four days of competition in Rome, the Lithuanian national team has two bronze medals won by Andrias Šidlauskas and Rūta Meilutytė in the 100 m breaststroke, and four swimmers have reached the finals.