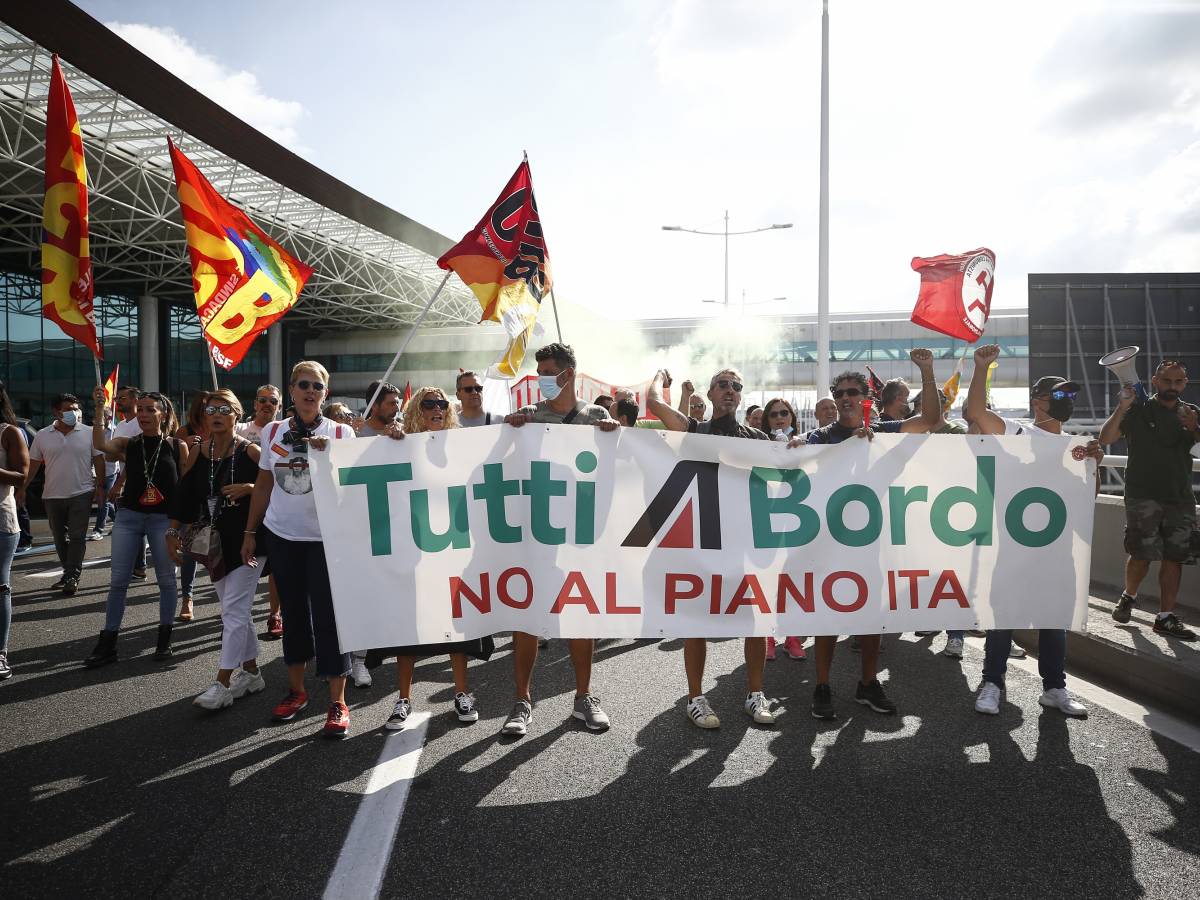 The Alitalia crisis falls on the government table. The tension rises after the failure of the negotiations with the new leaders of the new Ita on the hiring and on the contract of the 2,800 employees of the now former national airline. Prime Minister Mario Draghi is forced to change the executive’s agenda, now giving priority to the Alitalia dispute. Already at the beginning of next week, Palazzo Chigi will take over the dossier directly. Anger exploded yesterday during the mobilization called by former Alitalia workers in front of the Fiumicino airport. The toll is 8 officers injured in clashes between workers and police. The situation worsened when part of the demonstrators, after passing in front of the Fiumicino airport terminals, headed towards the Rome-Fiumicino motorway, hindering the circulation in the direction of the Roman airport. The police were forced to force the garrison of the workers who then returned to the Roman airport. On the street, the climate is on fire. An agent denounces: “In 2 thousand against 8”. In the Roman palaces, the government and parliament try to find a solution. The first signal comes with the convening of a discussion table with the trade unions by the Minister of Labor Andrea Orlando: “I called the table with the unions to tackle a piece of the problem, namely that of social safety nets and for Ita I can only hope that there is a resumption of the confrontation that brings the situation back to a riverbed ». The real game, net of social safety nets, is played between Palazzo Chigi and the Ministry of Economic Development. The workers demand a new bailout of the flag carrier. The old man, tears and blood, must be thrown away: 30% cuts in staff and drastic reduction in salary. As expected, the Alitalia dossier ignites the political conflict. Two days ago, the vote on the motion presented by Fdi that allegedly committed Palazzo Chigi on issues of social protection of former Alitalia and Ita workers was postponed to 5 October. The group leaders’ conference agreed that the motions will be discussed as the first item on the agenda. Meanwhile, next week, the Minister of Economy, Daniele Franco, could be summoned to a hearing in the Chamber on the Ita dossier. But the party of Giorgia Meloni arises on the postponement of the motion. «The government receives the unions and listen to the reasons of the Alitalia workers. The choice of the majority forces that yesterday in Parliament did not give guidelines to the executive in this sense as well, as Fdi had requested, is irresponsible. Unfortunately, we had denounced the risk that this decision would have exacerbated tensions, probably leading to episodes of violence of which the police are victims. Our total solidarity goes to them just as in the past few days we have had the opportunity to express it to Alitalia workers and their families »attacks the Fdi group leader in the Chamber Francesco Lollobrigida. Meloni adds: «Alitalia workers are right, a defense policy for our national carrier and a serious transport policy has never been made. I consider it unworthy how the government commissioner and the government are treating these workers who are not even recognized the national collective bargaining agreement. This is a very serious precedent, with the excuse that the EU asks for it. Fdi filed a motion and the majority asked for it to be postponed: another shame ». The deputy of the League and former undersecretary Claudio Durigon is asking for “concrete action from the government”. “We will soon arrive at a solution”, is the appeal of the blue Marcello De Vito. From the union the position is very tough. «On the former Alitalia – explains the secretary of the CGIL Maurizio Landini – it must be said very clearly that the new company, which was born with public money, cannot fail to apply national employment contracts. Even those who are managing that negotiation today think they can apply regulations and decide who they hire out of any comparison and discussion ». From Monday the dossier passes to Draghi. The workers of the former Alitalia remain in war gear.

See also  A cold is a symptom of the corona virus? Check the report